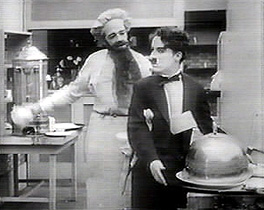 The incredible feats of films like Modern Times (1936) and The Great Dictator (1940) tend to take up most of the attention these days when we think about Charlie Chaplin. The Rink, however, released in 1916, was reportedly one of Chaplin’s most popular films at the time (1). The version of The Rink that I watched in preparation for this piece declared the film a prototype for many future Chaplin endeavours, containing “every variety of comic fall and many other gags that were later widely imitated” (2). Chaplin’s antics on skates in Modern Times and his later attempts to wait tables come to mind (3). Written and directed by Chaplin, The Rink has its own origins in the form of a Karno Company sketch called “Skating”, which was written by Charlie’s brother, Syd (4). The Rink itself has also subsequently been modified and mutated from the original, existing in many versions (5).

The widespread popularity of The Rink, in all its many versions, cannot be underestimated. Chaplin’s ability to draw humour from so many of the complicated experiences of modern life in cities across the world did not go unnoticed by many intellectuals and social commentators at the time. This was particularly true of Chaplin’s reception in Germany. Clocking in as Chaplin’s 8th film with Mutual, The Rink was actually the very first Chaplin film shown in Germany (6). It was first seen in Berlin on 2nd September 1921, three weeks prior to Chaplin’s first visit to the city, during which Chaplin was surprised to be largely ignored by the Berlin public. In London and Paris in 1921, he generally caused traffic jams (7). Throughout the rest of 1920s, however, the popularity of Chaplin’s Mutual films in Germany was said to rival that in France and England (8).

Chaplin was quickly considered an ally of the left in Germany. Hans Siemsen wrote in Weltbuhne in 1922: “He teaches absolute, radical irreverence. God bless him! He is a revolutionary!” (9) It is the left in Germany who, I believe, have provided some of the most exciting criticism of Chaplin’s work. From here on therefore, I will consider The Rink via the work of Walter Benjamin and Theodor W. Adorno, those giants of the Frankfurt School, as interpreted by Laleen Jayamanne and Susan Buck-Morss.

“Walter Benjamin’s understanding of modern experience is neurological”, Susan Buck-Morss tells us. “It centres on shock” (10). For Benjamin, “shock is the very essence of modern experience” (11). The Cure (1917), another of Chaplin’s Mutual films, is set in a holiday spa – a place offering an opportunity to recover from the relentlessness of everyday modern life and nervous exhaustion. Benjamin demanded a similar function for art against this relentless modern life of the industrialised cities – “to undo the alienation of the corporeal sensorium” (12). Can Chaplin’s films themselves be seen as a healthy antidote to modern life – “The Cure” sought by Benjamin for the industrialised era?

I would like to propose that Chaplin functions as what Buck-Morss describes as a “mimetic shock absorber” through his ability to transform what surrounds him so successfully (13). How does he do it? Chaplin brings the discipline of his virtuoso, athletic, slapstick-trained body into direct collision with the discipline required of him as a waiter in The Rink. Part of this virtuosity seems to be that Chaplin learns from, and is animated by, his objects, as much as he controls them. He almost wrestles them. It is in this wrestling with objects that the slapstick moment arises. In Philosophy of New Music, Adorno describes a composer not as a creator but as one who “mimetically realises” the possibility of materials “during the process of consumption” (14). We only have to think of Chaplin’s ability to hide from the head-waiter in The Rink by syncopating the rhythm of the “IN” and “OUT” doors of the kitchen to comprehend how successfully Chaplin can re-animate regular, functional objects.

Such wrestling moments in The Rink are moments of “mimetic play”, a concept Benjamin discusses in his essay “On the Mimetic Faculty” (15). Benjamin identifies mimesis as “the compulsion to become or behave like something else” (16). This capacity centres on improvisation and highlights, as Jayamanne points out, the “slippery, volatile, ambivalent nature of subject-object relations in mimetic performance” (17), which divert objects from their “familiar, ritualised, strategic functions” (18). For example, Chaplin’s walking stick becomes a teaching device and a tool to woo Edna when he offers her the stick horizontally as they glide around the skating rink.

Buck-Morss tells us that it is the “crisis of cognitive experience caused by the alienation of the senses that makes it possible for humanity to view its own destruction with enjoyment” (19). The skating scenes in The Rink show us “threatened bodies, shattered limbs, physical catastrophe – these realities of modernity” (20). And we laugh. We laugh at the extreme violence of this scene and the chaos that ensues. Why? Because as Jayamanne so astutely points out, and we can witness so clearly in The Rink, Chaplin can disorganise the spatio-temporal coordinates of a scene while he himself knows exactly “how to perform in uncoordinated space” (21). He escapes coming to blows so effectively over his stuffed-up orders in the restaurant and skates around the rink with absolute balletic grace as he trips everybody else up, managing to stay upright so incredibly while almost falling over. He operates happily in chaos. But, his violation of stable co-ordinates also gets him kicked-out of the skating rink. When Chaplin repeatedly falls up-and-down on Mr Stout’s wife’s face while being punched by her husband, he seems to have transgressed too far and the party turns against him, expelling him from the chaos he has created at the skating rink and chasing him out onto the street.

Jayamanne believes that the convulsive response of laughter becomes the key to reactivating seeing in the modern period, since laughing is a kind of bodily registering (mimetic apprehension) in the cinema (22). She identifies laughter as a violent convulsion, a “violation of familiar coordinates” like the slapstick action described above in the skating rink (23). That both laughter and slapstick can be incredibly redemptive and extremely violent brings me to my final remarks. In closing, I offer a health warning on this film. This health warning comes via an anecdote I heard at a dinner party a couple of years ago (24).

A very serious, unsmiling, and intellectual man was taken by his wife to see Modern Times at a Chaplin retrospective in Delhi some years ago. This very serious, unsmiling man roared with laughter through the entire film, tears streaming down his face. After the film, he went home to bed, but later that night woke up, having difficulty breathing. One of his lungs had collapsed and he had to be taken to hospital. He recovered well, and no one thought much about the film he had seen earlier in the evening.

A week later, his wife convinced him to see The Great Dictator before the Chaplin retrospective in Delhi finished. Again he roared uncharacteristically with laughter. Again, later that night, back in bed, his lung collapsed and he had to be taken to hospital.

Now, when this patriarch, with the slightly sensitive lungs, irritates a member of his family, they tease him with the suggestion: “Why don’t we go and see a Chaplin film, Dad?” To which the reply is always, “OK, but we can only watch half”.

I can’t help but laugh at the violence done by Chaplin’s films to this poor man. Modern Times and The Great Dictator created their own slapstick event in the lungs of this audience member. And certainly he and his family too, did see the humour in it. But would The Rink, at less than half the length of Modern Times or The Great Dictator, have been a safer option? What with scrubbing brushes and live cats being served for dinner, Chaplin’s rear-end landing repeatedly on the face of a large roller-skating woman, and the head-waiter being knocked out by a roast chicken, I wouldn’t risk it.