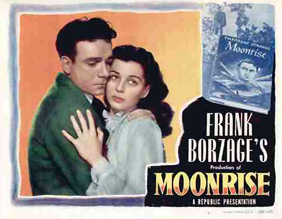 A prolific filmmaker with over 80 films to his credit in a career spanning the silent era to the late 1950s, Frank Borzage’s contribution to film history has been variously assessed. Frequently dismissed as a “sentimentalist of the screen” (1), Borzage has also been labelled “great and… totally misunderstood” (2). Working first as an actor, then actor-director, by the mid-1920s he was regarded as one of the most successful directors working in Hollywood (3). Specialising in the genres of melodrama and romance, Borzage is credited with shaping the careers of a number of prominent female stars, including Janet Gaynor and Margaret Sullavan (4).

Guaranteed a place in cinema history as the inaugural winner in the Best Director category (for Seventh Heaven [1927]) at the first Academy Awards in 1928, Borzage reached his directorial apogee in the 1920s and 1930s (5). Moonrise, made in 1948, is generally regarded as a rare creative highpoint in the remaining two decades of his working life.

Based on a novel by Theodore Strauss and adapted for the screen by Charles Haas, Moonrise was the third last film of Borzage’s career. One of the director’s most admired works, Moonrise has also been described as atypical, and something of a special case in Borzage’s oeuvre. With a storyline involving crime and violence, the film “departs dramatically from the simple love stories the director usually tells” (6). Moonrise also signalled a late stylistic progression in Borzage’s work, one that sadly remained unexplored in the final two films he completed before his death in 1962.

Moonrise opens in shockingly effective fashion. A man, framed from the waist down, is unceremoniously escorted to the gallows. His execution, obliquely represented by shadow and sound, is graphically matched in the following scene with the silhouette of a doll suspended over the cot of a crying child. Cutting again between the execution, and the playground persecution of the young Danny Hawkins, the fundamentals of the back-story are established. With a powerfully expressive aesthetic and impressive narrative economy, Borzage thus sets up the traumatic circumstances associated with his central protagonist, the adult Danny (Dane Clark). From the moment of his father’s execution, Danny is himself a dead man walking.

Set in a small Virginian town, the narrative in Moonrise turns on the classic sins-of-the-father-visited-upon-the-son proposition. Raised by his aunt, the troubled Danny has never reconciled himself with the circumstances of his mother and father’s death (the full details of which are revealed much later in the film). In the years since their playground encounters, banker’s son Jerry Sykes (Lloyd Bridges) has made it a personal mission to bully Danny about his father’s infamous end. A bitter and angry man, Danny’s situation is complicated by his love for Jerry’s girlfriend, schoolteacher Gilly (Gail Russell).

In one last brutal fight outside a local club, Danny accidentally kills Jerry. Concealing the death, he begins a romance with Gilly. But his feelings of guilt and insecurity rapidly sour the relationship. Danny’s increasing paranoia convinces him that the local townspeople, particularly the Sheriff (Allyn Joslyn), suspect him of Jerry’s murder.

Seeking shelter in the backwoods with his old friend Mose (Rex Ingram), Danny is forced to confront the consequences of his crime. Reconciliation with his grandmother (Ethel Barrymore), who reveals the truth about his father’s actions, enables Danny to finally come to terms with his past and the present. Moonrise concludes with an intensely moving scene of expiation, involving the unlikely figure of the Sheriff, and the loyal Gilly and Mose.

Given the dominant themes of crime and punishment, the expressive visual style and the tone of paranoia underpinning the storyline, Moonrise has traditionally been categorised as part of the American film noir canon. But in many respects, Charles Haas’ screenplay is less morally prescriptive than the classic noir text. The protagonists of film noir are typically calculating characters, criminals or feckless fall guys who are ultimately and unequivocally punished for their sins. Danny Hawkins’ predicament is less straightforward.

As the son of an executed murderer, he has suffered a lifetime of discrimination. He is as marginalised a figure in the small town community as the intellectually impaired Billy Scripture (Henry Morgan), a coalition Danny himself recognises when he protects Billy from the taunts of others. Jerry Sykes, who “has licked Danny so many times in the past”, finally provokes him to take revenge. Haas’ screenplay treats Danny, rather than Jerry, as the victim of crime – and circumstances.

This sympathetic treatment is reflected in the attitudes and actions of each of the central players in Danny’s life. Initially a suitably schoolmarmish character, Gilly not only falls for Danny but is also quick to recognise that “just like a boy in my class who is always bullied”, his belligerent behaviour is a result of profound unhappiness. When Danny’s Aunt Jessie asserts that, despite his family history, he is not a “bad boy”, it is a sentiment echoed by Danny’s old hunting partner and confidant Mose. A reclusive, elderly African-American who has deliberately “resigned from the human race”, Mose observes that there is “no such thing as bad blood”.

But most surprisingly, it is the local Sheriff, who not only identifies Danny as the killer, but also implicitly understands the circumstances which led to his crime. An unusually complex representation of law enforcement, in the film’s moving conclusion, it is the Sheriff who insists that Danny be allowed to “walk like a man” to face the consequences of his actions. Rather than the venal world of classic film noir, where characters are quick to rush to judgment and equally swift to exact revenge and retribution, in Borzage’s Moonrise, Danny ultimately gets the genuine justice he deserves.

If the Sheriff is an improbable repository of compassion, he is also privileged, along with Mose, with much of the films’ homespun philosophy – and many of the best lines. From his ruminations on small town life (“A small town is like a stomach; something is always digesting”) to murder and matters of the heart (“Sometimes murder is like love; it takes two to do it, the man who hates and the man who is hated”), he is an interesting character of few but well chosen words.

In fact, Haas’ screenplay is one of the many pleasures in Moonrise. With his ear for the Southern vernacular and well-observed character ironies, Haas ensures that every member of the cast, however minor, makes an impact. From the desperate-to-be-cool, jive-talking soda fountain attendant, to the sagacious Mose, dispensing sorely needed home truths, each character in Moonrise has a distinctive delivery.

The screenplay is also notable for its explicit foregrounding of issues of class. In addition to his father’s criminal past, Danny’s working class, rural origins are consistently contrasted with the “new money” affluence of the Sykes banking family. Where Danny is a “hick”, “from the mountains”, Jerry’s privileged upbringing means he was always, as one character remarks, “treated differently”. And yet this class distinction does not ultimately confer moral superiority. As the drama of Jerry’s disappearance unfolds, it is revealed that in addition to his thuggish behaviour, Jerry has been stealing money from his father’s bank.

If, as suggested earlier, Moonrise is neither typical of Borzage or film noir in terms of its exploration of crime and violence, the film does in fact encompass the director’s central preoccupations, and also conforms to many of the formal characteristics of the noir film. Borzage’s films have been described as demonstrating the director’s “profound commitment to the love story not only as something with a life of its own but as a dramatic parable that hymns the power of love” (7).

In Moonrise, the passionate if troubled central relationship between Danny and Gilly is thus consistent with Borzage’s interest in “the wondrous inner life of lovers in the midst of adversity” (8). And as with many a Borzage film, it is a relationship that ultimately has a profoundly redemptive effect, as evidenced in the films’ powerful conclusion.

If the love story in Moonrise is a classic Borzagian scenario, the film’s visual style is decidedly less typical of the director’s oeuvre. From the extraordinary opening scenes, with truncated framings, the forceful play of light and shadow and dynamic cross-cutting, Moonrise represents a departure from the more measured visual style of earlier Borzage works.

With the services of cinematographer John L. Russell (who went on to shoot Hitchcock’s Psycho [1960] amongst others), Borzage employs tight framings and consistent close-ups, (particularly of the beleaguered Danny), off kilter angles, and an odd but effective focus on the hands and feet of the central protagonists. Even the lovers’ romantic clinches are presented from unconventional angles, often obscuring facial expressions, and thereby making the emotional tenor of these scenes more difficult to read.

Borzage’s stylistic innovations in Moonrise, while uncharacteristic of the director’s work, align the film with the classic film noir canon. In Moonrise, as with many a noir work, the expressive visual style makes a significant contribution to the films’ atmosphere of escalating tension and its pervasive sense of unease.

Borzage’s predilection for shooting on studio sets, regardless of the storyline locale, gave the backgrounds of his films, as one reviewer describes, “an unreal fairytale quality” (9). This is very much in evidence in Moonrise. Despite its rural small town setting with adjoining swamplands, Borzage forgoes any suggestion of bucolic expansiveness. Rendering the town streets and surrounding countryside claustrophobic and oppressive, he creates a subtle feeling of disquiet and vague unreality entirely appropriate to the central protagonist’s troubled state of mind.

Borzage once remarked that “Every good story is based on a struggle” (10). Haas’ adaptation of Strauss’ novel gave Borzage just such a good story. With powerful performances from his lead actors, particularly Dane Clark in arguably the best role of his career, Moonrise was a romance after Borzage’s heart, with an additional layer of psychological intensity. It remains, justifiably, a critically acclaimed high point in his career.