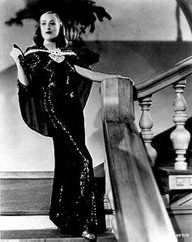 As one of the nearly 500 films released by American studios in 1937 and the second of Crawford’s three films that year – alongside Mannequin (Frank Borzage) and The Last of Mrs Cheney (completed by Arzner after director Richard Boleslawski’s death) – The Bride Wore Red was given little opportunity for critical or financial success. It was only granted three months from the start of production to release, partly as a result of the shifting of power from directors to producers during the full-scale institution of the Production Code. This was compounded by the overwhelming demand for films by audiences, which would average 80 million single admissions per week by 1938 (1). Arzner’s status as a marginalised female director, one of the few who survived the transition from silent to talking pictures, was of little help – a woman seemingly on top of the world from an outsider’s perspective, yet one who could also be viewed as a merely “ornamental” figure on “display” in a male-dominated industry, This novelty arguably prolonged Arzner’s career more than her genuine talent – she had directed 17 feature films – and fuelled the sour tone of her second and third last projects The Bride Wore Red and Dance, Girl, Dance (1940).

Thus, it comes as no surprise that the opening image of The Bride Wore Red is that of a music box featuring a lone porcelain figurine towering over a picturesque Austrian countryside – fragile and petite; yet, at first glance, bigger than life. As the champagne corks pop and class lines are drawn in the scenes that follow, we learn that this likeness serves to foreshadow the fate of Anni (Crawford), a struggling nightclub singer in “the lowest dive in all of Trieste”. She is caught up in dreams of class ascension and wealth until she’s offered an opportunity to live the “life of breeding” for two weeks at a resort in Austria. Sceptical at first, and weary of someone who’s only “come to stare at the animals in the zoo”, Anni jumps at the chance to prove that “riches are all just a matter of luck”.

Two scenes later, Anni is transformed into a fur-clad lady of privilege greeted at the train station by Giulio (Tone), the local postman. Obviously let down at the absence of a horse-drawn carriage, and having left her former self a hundred miles behind, Anni is quick to express her dissatisfaction, “Do you think I’d ride in there? Ladies don’t ride in donkey carts!” Enduring the ride to the hotel, Anni is pleased to be greeted by an apologetic manager and two bellhops standing by to tote her four newly purchased suitcases up to her suite. With the assistance of her maid – a woman who actually turns out to be an old acquaintance – and a waiter who is later revealed to be the postman’s cousin, Anni swiftly adapts to the rules of the game, trading in her red evening dress for a conservative white gown and fan, stating, “For two weeks, I’m on top of the world. For two weeks, I’m a lady.”

Yet with MGM’s budget funding Crawford’s wardrobe, Anni finds no difficulty in driving the men of the picture to everything short of catcalls as “the flag goes up” when she passes by – reinforcing her role as an object in the social order more than anything else. The talk of the resort, Anni is befriended by an aging admiral (Reginald Owen), a countess (Billie Burke), a wealthy bachelor (Robert Young) and his childhood girlfriend (Lynne Carver). Determined to make the best of her opportunity, Anni rejects the advances of the postman, who has fallen in love with her, in order to pursue a possible marriage to the bachelor, Rudy – essentially choosing money before love and possibly paralleling Arzner’s own bitterness toward Hollywood’s studio era. In a moment of remorse, Anni admits to Giulio that she actually loves him more, but that “[Rudy]’s got what I need for happiness”. Heartbroken and convinced that Anni is making a mistake, the postman is forced to deliver a letter revealing Anni’s true identity to the countess, effectively ruining her opportunity to “marry rich”.

But, in this “love story” Rudy gives no thought to reconsidering marriage to Anni, as it would defy the social order. Even Anni seems to give up on the cause once her cover is blown – unashamed of the red dress she wears to her final dinner in order to distinguish herself from the aristocracy and content to run to the arms of the postman, whom she readily brands as a “servant” in earlier scenes.

Ultimately, Anni never changes; realising the early “peasant’s mantra” of the film which states that, “To be happy, you must be contented. To be contented, you must find your place in the world and stay there.” Basically, whether you’re a nightclub singer, aristocrat, or a minority director in Hollywood, don’t forget your true colours – red or otherwise.