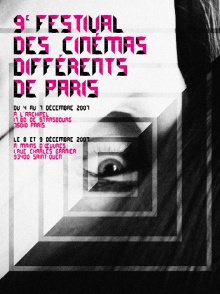 Roland Barthes said about cinema that “it granulates, it sizzles, it caresses, it rubs, it cuts: it comes”. The 9ème Festival des Cinémas Différents de Paris deploys all these possibilities, introducing creative gestures that induce a breaking in – breaking into a world that very often seems to have gone plain. Held in two different locations (Paris and the suburb of Saint-Ouen, headquarters of the very active Collectif Jeune Cinéma who put together the festival), this international non-competitive festival goes beyond the traditional idea of representation.

Why is this? The festival aims to show that there is a tireless willpower to create an alternative, ambitious and unlimited cinema, and – good news – that there is a public, eager for these kinds of screenings, that also enjoys discussing and writing about them. Furthermore, the festival was a reflection platform for thinking alternative forms of creation on the fringes of the industrial system, as it aimed to open wide the range of cinematic and cinematographic possibilities through installations, performances, workshops and concerts.

The transversal approaches that were proposed by the Festival are like axes of innovative and creative forces around the world. The portrait, a classic genre, was reviewed as a mosaic, and reflected thus all the possibilities of a peripheral vision.

What is here known as the mood landscape (“paysage état d’âme”) is the topographic evocation of time, of prints, traces and memories. The latest work from Olivier Fouchard opened this series in an exceptional avant-première. Le Granier presents all the shades of materiality, from snow to fire. Viviane Vagh allows the image to express all the ranges of a young woman’s presence, including her absence, in Now You See Me, Now You Don’t). Contemplative cinema was revisited by pictorialism, and the results are seen in films like Au cri de la vague (by Véronique Duhaut) along with new technologies, or in Das ruínas a rexistência (by Carlos Adriano), a constant homage to film materiality. Evocation and shadows: all of the human frailty is captured by these artists and others like Lyle Pisio (Another Lost Soul), Franck Beauvais (Vosges), Sinisa Kukic (Pump), Yu Shigematsu (In Between) or Victor Ede (Il n y a que le bazar qui reste). 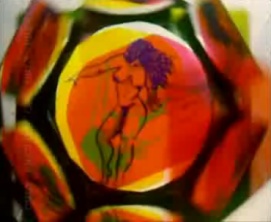 How does cinema represent the body nowadays? Antonello Matarazzo’s La Posa infinita recalls that primal fear of photography as a soul catcher. Presence and evanescence is the constant dialectics in Jurga by Pip Chodorov, Home Body by Aubriand, Dad by Daniel Mulloy, Fragilité by Isao Yamada and in Imprint, the latest film by Cecilia Araneda. What constitutes a “self”? The parts of a deconstructed body, like in the extraordinary films Search and Hide by Karø Goldt and Erase Remake by Jan Machacek and Martin Siewert? What makes us “belong”? The resemblance, the air de famille, as shown in the fresh and joyful film Le Corps humain, by Alexandre Larose? And eventually, a portrait could also be the chronicle of one’s hours, like the very simple and almost naive Une terrienne, the portrait of an elderly woman by her poet grand daughter Séverine Pinaud.

The body is musically deployed along with the elements and their dynamism, in Fuego by Elena Pardo, or fully eroticised by Stéphane Marti in the superb L’Homme qui danse. Humour comes to explore our ideals (Mara Jelic’s Bomba Delirium), is disturbed by contemporary choreographies (Mara Mattuschka and Chris Haring’s Part Time Heroes), thus showing the primal vocation of cinema: the representation of body motion (also present in Drawing Genesis by Jaimz Asmundson, Sail to the Moon by Julien Benoît, Pulsions by Izabella Pruska-Oldenhof, and Them-Me by Nisrine Boukhari).

Invitation to the voyage

But there is also another kind of portrait. In the program prepared by filmmaker Philippe Cote, one could say: look for a man, you’ll find a new land. Under the sign of Peter Hutton (in his Images of Asia (A Diary From Life 1973-1974)), artists like Sothean Nhieim and Philippe Cote enroll humanity into landscape, inscribing each and every individual into something that transcends them. The contemplation of Cote in the Asian continent in Laos, and the Cambodian ceremonies for exiles in France filmed by Nhieim (Fêtes des morts and Nous ne sommes pas seuls au monde) are simply magnificent. There are also other ways of seeing the other: Scastje by Serguei Dvortsevoï, Maroc, été 2004 by Christoph Clavert and Territoires occupés, printemps 2005 by Jérémy Gravayat, show time going by… otherly.

Children were also invited for imaginary trips along with some “classics” (Brakhage), or with the surprising guests of the festival, Elena Pardo and Olivier Fouchard, amongst others.

But the international exploration has also lead to other programs. For example, the Nordic cinemas program, partly curated by Swedish artist Marcus Nordgren, which focused on contemporary life circuits in Sweden and Finland. Experimental animation, cynicism, humour and abstraction – these were some astounding and moving samples of what vibrates up north. They’re all like poignant celebrations of youth, innocence and contemporary terror.

The festival is also an exhibition space for features that are bound to some marginality, due to their artistic ambitions. The post-impressionist film by Mauro Santis, Flor da Baixa, is an unforeseeable travel across many cities in the world: across night and day. Marc Barbé, whom we know as an actor, directed his second film, a rare piece of handcraft, A une enfant qui danse dans le vent, inspired by a W.B. Yeats poem. Barbé films as close as a camera could ever get to silence, to nostalgia and dreams. Laurence Rebouillon presented her Super 8 feature, West Point. It is an elegant evocation of guilt, memory, childhood and love, through a worldwide detective story. A majestic way to ask: where did the story (our story) begin?

The careers of two filmmakers were honoured: Moira Tierney and Frédérique Devaux.
From Ireland to New York, Moira Tierney portrays the crowds, her friends, in such a generous way, that we almost forget it’s Jonas Mekas and Andrew Lampert who actually pierce the screen. The political dimension is very present, through demonstrations and tributes, different ways of evocation and memory, of protest and resistance. Frédérique Devaux’s oeuvre is a real tribute to cinema from the edge of the seventh art. Her films show the internal crack up of the image, multiplying the possibilities to decipher the dynamism and the claims of such an important artist. It is a rare privilege to watch her complete works. As in a game, we face the magic of the moving pictures, the magic of language. She burns what she has loved (cinema), but she loves and pays homage to what she has joyfully burnt.

The works of Richard Kerr, one of the most important experimental filmmakers from Canada, are like an inventive manifesto of the avant-garde – of its critical views, ambitions and accomplishments. Directly from the Winnipeg Film Group, Solomon Nagler’s triptych shows, in its dark and fascinating photography, how cinema can descend from pain, from the unspeakable – and be utterly, blackly resplendent. His elegies go deep into the Hebraic taboo of representation, and deliver us some of the most intimate and poetic images of our times.

How to dismantle cinema?

But the festival was also a ravishing ground for spectators. Pierre Merejkowsky animated a workshop, inducing his apprentices to participate and provoke debates inside the theatre. The Lis Voir bookstore presented a wide collection of French and internationally acclaimed editions on experimental and avant-garde subjects (Paris Expérimental, LoWave). 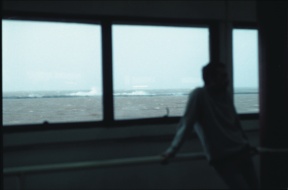 The Expanded Cinema section was a real fascination space, featuring analytical pieces like Alexis Constantin’s Film en boîte, or the fragile Photosynthèse by Andrea Vamos and Flowers and Leaves by Marguerite Harris which provided a sort of framework by which cinema could go beyond its own limits. The highly poetic and almost mystical installation L’Arrière-saison by Philippe Grandrieux proposes a real meditation on time, harmony and nature.

Powerful and active creations closed this edition of the Festival des Cinémas Différents. The band Fatale gave a special concert, an original set inspired by their films and older songs, something between mescaline and adrenaline. The unforgettable closure to such a display of unlimited cinema was the performance–screening De un vastísimo mar by Yoana Urruzola, Stefano Canapa, Josefina Rodriguez and Julien Tarride. It is a meditation on exile, on a past repressive regime in a dream-like Uruguay, but also a melody about return, variations on the poetry of an uncertain land, where no one really knows if they’re walking or simply floating. The screening is eventually a gesture, an infinite commitment, in the vastness of the cinematic continent.

Art is an engagement, a challenge, and a promise. The Festival des Cinémas Différents de Paris seemed to claim: cinema is dead. And yet, it also added: long live cinema.