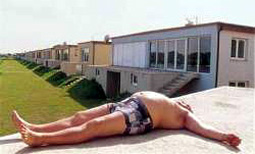 I don’t make any difference between feature films and documentaries. That’s why the term “staged reality” was coined. That means the people in my film are non-actors, but sometimes don’t act that way. And that irritates some people. They want to think and see in tidy categories.

At the Berlin premiere of his feature debut Dog Days (Hundstage) (2000), Ulrich Seidl prefaced the film by wishing the audience “a disturbing evening” (1). Like the films of compatriot Michael Haneke, with whom he shared the stage that evening, Seidl’s work does indeed constitute a cinema of disturbance (2). Unlike Haneke or his protégée Jessica Hausner, however, Seidl finds the disturbing not in extraordinary outbursts of violence or helplessness, but rather in the everyday strangeness all around us, a world he transmits formally in blurring and ultimately deconstructing the boundaries between fact and fiction, documentary and feature. He ranks, alongside Egon Humer, as the most important Austrian documentary filmmaker of the 1990s and has only strengthened this position in the last few years.

Ulrich Seidl has repeatedly emphasised in interviews and public appearances that he never intended to be, and indeed does not see himself solely as, a documentary filmmaker. Like others working in Austria’s subsidy-dependent film landscape, Seidl stumbled upon the documentary as a means to realise his cinematic aspirations without having to resort to making movie-of-the-week fare. And even before shooting Dog Days Seidl refused to call his films documentaries, maintaining that all his films have both “documentary and fictional levels” (3).

Seidl’s stylised, laconic regard of quotidian quirks moved his work beyond the social reportage and discourses of “authenticity” and “reality” that inform other domestic documentaries. The world he records lacks any pre-packaged shine. Seidl is uninterested in “life’s few happy moments”, which he justifies by asserting the contrast between his cinematic project and a wedding photographer’s job (4).

That Seidl is no wedding photographer of the traditional kind is already evident in The Ball (Der Ball) (1982), his final film at the Vienna Film Academy. The Ball, about a graduation dance in a small Austrian village, depicts the hypocrisy and gluttony of an inhibited, ritualistic society that lets everything go on one night of the year. After having finished at the Academy, Seidl suffered through rejection letters and documentary assignments for ORF (Austrian Broadcasting Corporation) and 3SAT, a German-Austrian-Swiss channel. Even these early pieces betray his distinctive stylistic signature and knack for irony and satire vis-à-vis the mundane. His first big break in Austria came in 1990 with the cinematic release of a controversial feature-length documentary.

Of Dogs, Mail-Order Brides, and Others “Who Don’t Talk Back” 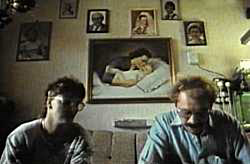 Good News or: Of Paperboys, Dead Dogs, and Other Viennese (Good News oder: von Kolporteuren, toten Hunden und anderen Wienern) (1989/90) is a dialectic essay in which the squalid conditions of South Asian immigrants who sell newspapers in Vienna’s outer districts are juxtaposed with observations of well-to-do Viennese tabloid readers. Seidl’s camera captures the pathetic subjects in stylised tableaux, lingering within static frames for uncomfortable lengths of time. This technique, although still evolving in this film, marks Seidl’s later documentaries with ever greater effectiveness. Its roots are essentially twofold: (i) Brecht’s Verfremdungseffekt, a theatrical device in which an irritating distance between the actors and the audience creates a critical space and (ii) a tradition of “painterly” cinema, critically articulated in various forms from Münsterberg and Balázs to Bazin, which emphasises long takes and deep focus. Seidl’s appropriation of this painterly cinema amounts to its deconstruction, however. Whereas Bazin praised Rossellini’s Paisà (1946) for its depiction of a staged event in a “realistic” cinematographic language (long takes, deep focus), Seidl uses these techniques in his documentary films to achieve the exact opposite effect – that of a stylised, plastic world. In this sense Seidl is also working against the contemporary equation – in documentary reportage as well as in the Dogma ’95 cinema – of a shaky camera with the “real”.

Structurally, Good News makes ironic the symbiotic relation between the distribution and consumption of news in Vienna, that is, between the immigrant sellers and the partially xenophobic buyers. The film posits that both ultimately exist on the edge of society.

Good News was very much an event in Vienna during its initial run. It stimulated public discussion throughout Austria and Germany. After a few weeks the film had reached an audience larger than most domestic genre films and remained a presence in Austrian cinemas for several months. The exceptional performance of Good News at the box office gave Seidl the financial freedom to pursue his next project. With Loss Is to Be Expected (Mit Verlust ist zu rechnen) (1992), Seidl moves from the outer districts of Vienna to the border zone between Austria and the Czech Republic. The film chronicles the foreign affair between Josef Paur, an Austrian widower and Paula Hutterová, a widowed senior of German descent who lives in the Czech village just over the border. In some ways the piece follows familiar patterns from Good News: Josef is the bored capitalist pensioner and Paula the overworked victim of socialism’s legacy. He wants a companion and maid to spice his routine; she wouldn’t mind an easier life. In the end though, their lives are simply too incompatible to sustain the romance.

Loss Is to Be Expected begins with an arresting image: a village idiot undresses in front of the camera and performs a strip-tease to the barely audible static from a Czech radio station. Seidl maintains that this behaviour and the tolerant attitude with which the Czech villagers regard it are meant to serve as a contrast to Austria (5). There, just a few kilometres over the border, such a man would be locked away on the basis that he is disturbing the “image” of the community. This is an example of a tactic central to Seidl’s works: mapping two worlds that although located geographically close together are totally different from one another.

Three years following Josef’s failed courtship of Paula, Seidl turned his attention to another set of international relations. The Last Real Men (Die letzten Männer) (1995) is an hour-long piece following the Viennese teacher Karl S. on his search for a wife who doesn’t question traditional gender roles and “doesn’t talk back”. In so doing, Seidl probes the motives that make Austrian men look for wives in Thailand and the Philippines. The Last Real Men might be considered a more direct approach to the “economies of desire” problem Seidl treats in Loss Is to Be Expected. The bourgeois ideal of marriage is stripped away and revealed as a strict commodity exchange.

If The Last Real Men draws on themes from Loss Is to Be Expected, then Ulrich Seidl’s second documentary of the year, the feature-length Animal Love (Tierische Liebe) (1995), picks up on a subject introduced in Good News, namely, the obsessive attention Austrians give to cats, ferrets and, above all, dogs. In Animal Love Seidl returns to the middle-class Viennese milieu of Good News and once again records their sterile homes and lives with an icy distance. To these people, pets represent conversation partners, bedfellows and fashion objects to be groomed and polished meticulously. Seidl’s point ultimately proves meta-cinematic: the animals function as the projection screens for human desires. And once again Seidl reveals a pathetic loneliness and desperation behind the care and attention, that, as Seidl himself says, is the subject of all his films, “hell is us” (6). 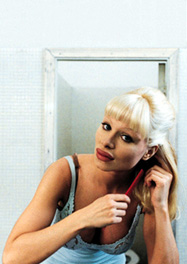 Models (1997) examines the hopes, fantasies, and finally the realities of young models. Although supermodels often figure as the heroines or at least vaunted objects of desire in our society, Seidl fixes on the rather banal everyday tics and predicaments from which the women suffer: cellulite, breast problems, the inability to be alone and the catty competition among them. With his unique blend of documentation and stylisation, Models portrays the models’ daily life and the monotonous application of make-up and hair gel that commodifies the body. It is a world of glamour whose shine and lustre Seidl rubs away. This un-masking function harks back to The Ball.

Dog Days, Seidl’s feature film debut, represents much less a departure than a continuation of his narrative strategies, formal shapes and stylistic emphases. The film unfolds in a Vienna suburb over two hot, sticky days. The characters and their isolated, lonely lives are introduced much in the same way Seidl presents the characters in his documentaries: with a focus on daily, mundane activities that simultaneously lays bare the “insanity of normality” (7). There is the insanely jealous boyfriend and his meek lover juxtaposed with the retiree who spends his time tending to his immaculate lawn and weighing packages of sugar to ensure he hasn’t been swindled. Then there is the woman who walks from a session of rough sex at a swinger club directly into the main halls of the mall where children play. She lives in a huge house with her alienated husband; both mourn the death of their child, yet Seidl never betrays the details of this history. Dog Days is a disturbing suburban story told with irony, but it never pulls punches nor does it offer final redemption.

In form and style, it is difficult to separate Dog Days from Seidl’s documentaries. Indeed, it is impossible to differentiate between the amateurs and the few professional actors that Seidl hired for the film. One gets the sense that in this film, just as in Seidl’s documentaries, the characters are “playing the role of their own lives” (8), which the production history certainly bears out: the pimp and the alarm salesman in the film, for example, have the same professions in real life (9).

His latest film, Jesus, You Know (Jesus, Du weißt) (2003), again mines the “insanity of normality“. The concept is brilliantly simple: film six God-fearing Viennese alone in a church praying. There is only one condition: the pious Austrians must say out loud that which they usually direct towards God in silent prayer.

Jesus, You Know – like Seidl’s previous films – puts the spectator in a bind. On one the hand, the “characters” in the documentary are genuinely ridiculous. On the other, one feels guilty for laughing at such vulnerable creatures. This is again a boundary that Seidl attempts to blur: “the border between something being funny and the moment in which laughing completely escapes us” (10).

Seidl is interested in probing relations: the personal relations people forge with their God, but ultimately, the relations at work when we watch films. Jesus, You Know jolts the audience. It asks whether we are to be passive members of the cinematic flock – simply letting images flicker by at 24 frames per second – or whether we engage with the screen in a critical way. Yet alongside all meta-cinematic considerations, Ulrich Seidl’s signature emphases are present here as ever: locating the outsiders who live among us, all the while patrolling the border zone between fiction and document.

Jesus, You Know will screen at the Melbourne International Film Festival on 25 July and 7 August.