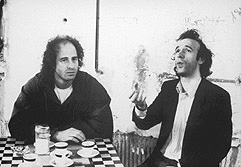 Jim Jarmusch’s Coffee and Cigarettes (2003) isn’t quite “new”, nor does it constitute any sort of meaningful development from Jarmusch’s earlier feature films. Gliding along on previous achievements and well-earned recognition as one of the mavericks of American independent cinema in the 1980s, Jarmusch in his latest offering looks comfortably back instead of looking ahead – compared to the hits of his hit-or-miss oeuvre, it serves more as a placeholder than a cinematic statement in its own right. In other words, Coffee and Cigarettes is terribly, almost surprisingly, slight.

Shot over the course of 17 years, the film features a who’s who of hipster icons – among them Tom Waits, Steven Wright, Jack and Meg White of the White Stripes and Taylor Mead – in vignettes centred around the legalised drugs of the title. Elements cross over from one vignette to another: cousins far apart in custom and personality, Nikola Tesla’s theory of “acoustic resonance”, and the negative health effects of nicotine and caffeine. These recurrences, however, don’t so much expand on ideas as provide vague justifications for bringing loosely scripted situations and match-ups under the same banner. So we get Waits and Iggy Pop needling each other about their musicianship in an empty backwoods bar; Alfred Molina attempting to bond with Steve Coogan, who may possibly be a relative; Bill Murray bugging-out the Wu-Tang Clan’s RZA and GZA by chugging coffee straight from the pot; Renee French reading a guns-and ammo-magazine while getting pestered by her clearly smitten waiter; Roberto Benigni and Wright speaking past each other and playing a game of musical chairs.

Jarmusch self-consciously ties together his preoccupations from earlier films (the collision of cultures and languages, the indefatigable spirit of iconoclasm) as well as showcasing long-term collaborators (Benigni, Waits, Pop, RZA, Isaach De Bankole) but nothing truly gels in the way unusual narrative collages like Mystery Train (1989) so effortlessly have in the past. The saving grace of Coffee and Cigarettes might be its look: Jarmusch uses his trademark long takes and high-contrast lighting for the maximum beautification of – and in order to display his languorous affection for – the stark cafe settings. An overhead shot of perfectly arranged cups and ashtrays sitting on a checker-pattern tablecloth – a sort of hard-edged still life – recurs, although its placement within each segment feels gratuitous and awkward, as if Jarmusch felt the need to remind his viewers visually of the film’s flimsy premise. Photographed by several cinematographers (Tom DiCillo, Frederick Elmes, Ellen Kuras, Robby Muller), Coffee and Cigarettes nonetheless maintains a consistency in its image that proves Jarmusch one of the unique creators of minimalist, black and white compositions. One can’t help but be reminded of the rich B&W that suffused Stranger Than Paradise (1983), Down By Law (1986) and Dead Man (1995) with an air of mystery and faded, post-industrial grandeur. But in Coffee and Cigarettes any such mystery or sense of environment ultimately evaporates due to the unengaging subjects in front of the camera, and a dull, lazy reliance on shot-reverse shot editing.

The X-factor in Jarmusch’s work has always been his humour, which has wavered from the hilarious, absurdist dialogue of Stranger Than Paradise and Down by Law to the juvenile brain-squashing of Dead Man and old-white-guy rapping of Ghost Dog: The Way of the Samurai (1999). Jarmusch can be a master of the perfectly placed one-liner (who can forget Benigni’s “If looks can kill, I am dead now” from Down by Law?), or else trap himself with overly ambitious satires of cultural and racial divisions in America. The muddled allegorical elements of Ghost Dog, for example, often overshadowed the film’s terrific use of its individual performers’ voices and facial features.Coffee and Cigarettes might have been, even if a minor work, a film in which Jarmusch displayed his ability to create memorable characters and humorous scenarios out of sessions of shit-shooting. But often its verbal play falls flat and its arbiters of cool fail to fill the void with their mere presence. Particularly overlong and painful is Cate Blanchett’s conversation with herself as both grungy loser and successful, movie star cousin, a skit that employs standard types from beginning acting classes. The head-scratcher involving that aforementioned treatise on “acoustic resonance” (surely a credo for Jarmusch’s quiet, deadpan cinema, influenced by the director’s favorite musicians) lands flat on its face with smirking performances by the White Stripes, whose own media saturation works against them here in terms of arousing any sort of audience curiosity. And a segment involving a meeting between old friends (Alex Descas and De Bankole), one of whom is convinced something must be wrong with the other because of his terseness, literally just sits there on the screen, waiting for something, anything to come along and alleviate the tedium resulting from the one non-joke set-up.

The pleasant, human awkwardness of Jarmusch’s early work seems to have transformed into cinematic tone-deafness: jokes repeatedly fall flat, character quirks look irredeemably contrived, and Jarmusch forgets where to appropriately end a scene, making ten-minute segments outlast their usefulness after a few moments. The slowness of his early films immersed the viewer in an unfolding situation with naturalistic pacing; in Coffee and Cigarettes, the frame of the short film (as opposed to vignettes propelled forward by a greater narrative arc) constrains Jarmusch and forces him to mistime punchlines as well as reaction shots, or else fill the film with moments of speech that ring hollow, even if the voices are recognisable.

Coffee and Cigarettes developed from the Wright/Benigni segment shot for Saturday Night Live back in 1986, but the film’s mediocrity suggests the weaker aspects of Ghost Dog, in which empty cultural hodgepodge clashed with the eerie atmospherics left over from Dead Man. Coffee and Cigarettes, then, follows through on the worst of Jarmusch’s indulgences, demonstrating his tendency to place surface-level irony and counterculture posturing above introspection or even truly funny sketch material. If anything, these vignettes prove that a film can’t get by on personality alone. By the end of the film, even the appearance of hipster funnyman du jour Murray can’t right this ship. His on-screen joust with RZA and GZA, while a highlight compared to its paltry companion pieces, still feels like a half-baked exercise in celebrity exhibitionism and obvious cultural opposites. 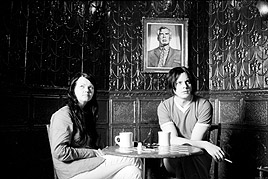 The concept behind Coffee and Cigarettes seems especially slight for Jarmusch. Films like Paradise and Law worked due to a deft combination of evocative, minimalist mise en scène and delicate portrayals of longing and miscommunication. And although he has sometimes missed the mark, Jarmusch has shown that he has provocative things to say about contemporary American society and its roots, as demonstrated by Ghost Dog and Dead Man, two films that investigated and revised, respectively, gangster and western genre conventions. Coffee and Cigarettes, on the other hand, almost immediately reveals itself to be one-dimensional, and each succeeding vignette only adds to this impression. Where at his best Jarmusch balances hipster disaffection with charming innocence (even naiveté), the tone of Coffee and Cigarettes often veers into obnoxiousness, as in the White Stripes episode. When Jack White mentions Tesla his partner Meg inevitably brings up the cheese-rock band of the same name, a winking reference that gives some clue as to the audience Jarmusch may want to reach – only pop culture ironists will find this witty. The same might be said for the Iggy Pop-Tom Waits duel. Waits talking about his hitherto unknown medical skills conforms to the corniest and most condescending hipster humour: the untouchably cool star descending from the throne to pretend at being a normal person. The humanity of Jarmusch at his best takes a backseat here to a gloating chic tempered only by the mellow visual style. Whether this humour is a side of Jarmusch usually tamed by the narrative confines of his “regular” features, and now allowed to roam free in a supposed “throwaway”, remains uncertain.

Many fans and critics have already excused Coffee and Cigarettes due to its unquestionable minor status, but this is the wrong approach to the film, if only because Jarmusch has already taken the same route before in the forgettable pseudo-experiment Night on Earth (1991) and the Neil Young and Crazy Horse concert movie Year of the Horse (1997). Jarmusch seemed content in the former to patch together only partly developed shorter skits, and in the latter to have a blast with long-time friends and collaborators while simply keeping the camera rolling, both approaches taken at the expense of his audience. Coffee and Cigarettes melds such well-intentioned yet faulty premises into a single display of stalled artistry – or else artistry placed on the back burner until the next “real” effort. With many directors this would be regrettable but not entirely surprising; with Jarmusch, given his importance in contemporary cinema, it comes as a letdown. This isn’t to say that Jarmusch forgets his art since hints of it do poke through in Coffee and Cigarettes – his ability to elicit quirky, engaging performances (by Mead and Murray) and his eye for the sublime in the mundane, as evidenced in those beautiful tableaux. But the film shows that he also can, disconcertingly, put art aside seemingly at will and without reservation, forgetting – in the process of creating a sort of cinema of the coffee break – how to make a statement and keep those awkward laughs coming all at the same time.

Coffee and Cigarettes will screen at the Melbourne International Film Festival on 22 July and 8 August.