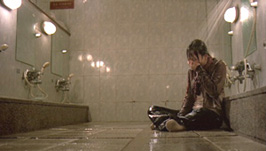 In an early episode of Kim Ki-duk’s Samaritan Girl (2004), the adolescent Jae-yeong (Min-jeong Seo) tells her classmate and best friend Yeo-jin (Ji-min Kwak) the tale of an Indian prostitute named Vasumitra whose clients, as the curious legend goes, became devout Buddhists after their sexual encounter with her. It is an innocuous topic of conversation that takes on an inherently disagreeable tone within the context of their troubling activity, as the demure Yeo-jin helps the more uninhibited Jae-yeong apply make-up in preparation for a rendezvous with an older client, a transactional “date” arranged by Yeo-jin on her friend’s behalf (albeit using her own name) through an online chat. The fanciful Jae-yeong interprets the anecdotal spiritual awakening as a testament to Vasumitra’s feminine prowess, and it is this naive belief in sexuality’s nurturing, revelatory potential that seems to embolden Jae-yeong into following through with their sordid enterprise. Determined to reach their superficial goal of earning enough money to be able to travel to Europe, and seemingly obsessed with the mythical prostitute’s powers of transfiguration, Jae-yeong exhibits a fearlessness (or perhaps, wanton disregard) of consequence that, one afternoon, in the presence of her trusted lookout Yeo-jin, will lead to an irrational and tragic leap of faith.

The recurring theme of transcendence through a transformative encounter defines the course of the film, as Yeo-jin attempts to come to terms with her complicity in Jae-yeong’s incomprehensible act by retracing her friend’s liaisons through a meticulously kept personal diary that had also served as an account of their financial progress towards their hoped-for European trip. Contacting each client under the familiar pretence of shared intimate history, Yeo-jin embarks on a guilt-ridden journey of sexual and financial restitution: arranging to reunite with each of Jae-yeong’s “dates”, consummating their transaction, revealing the plight of the “first” Yeo-jin, then concluding their meeting by returning the money once given to her friend by them. Her unexpectedly sincere, obliquely Samaritan act proves cathartic to the thoughtless, exploitative clients, turning their seemingly inconsequential dalliance with the under-aged prostitute into a humbling moment of reckoning for the transgressions and emptiness in their own lives. However, as Yeo-jin perseveres in her humiliating, delusive obsession with self-atonement, the toll becomes even more unbearable for her doting father, a widowed police detective named Yeong-ki (Eol Lee) who, already grieving from the senseless death of his wife (a still unsolved, ongoing police investigation), becomes an inadvertent witness to his only child’s unfathomable descent into prostitution: a discovery that ironically occurs as he investigates the crime scene of a violently murdered young woman – most likely, another under-aged prostitute – in an opposite room of a similarly decorated love motel. Consumed by a sense of impotence over his daughter’s debasement and corruption, he begins to follow Yeo-jin as she conducts her bizarre, invariable after-school routine.

Consisting of three chapters, “Vasumitra”, “Samaria” and “Sonata”, and exploring such spiritually fundamental themes as sin, moral bankruptcy and atonement, the film suggests a cursory – but fitting – modern-day parallel to the tripartite structure and redemptive themes of Dante Alighieri’s epic narrative poem, The Divine Comedy. Set in the alienating urban landscape of contemporary Seoul (although its human desolation could be typical of any despiritualised, materialistic society), The Samaritan Girl is a figurative descent into the soulless, impersonal spaces of anonymous Internet chat rooms, tawdry love motels, and secluded public parks (which seem to be populated more by statues than by real people). These are the spaces that Jae-yeong inhabits in a misguided quest for connection and material gain, and that Yeo-jin must later traverse in order to expiate her own feelings of culpability. Moreover, the film is also a chronicle of spiritual dilemma, intrinsic to the sentiment of wishing to bear another person’s burden (and more broadly, of Catholic guilt) that motivates the actions of both the prodigal daughter, Yeo-jin, and, subsequently, her father Yeong-ki. It is this figurative Christ-like cross-bearing for the perceived sins of others that is illustrated in the indelible image of Yeo-jin carrying a critically injured, partially clothed Jae-yeong on piggyback through the crowded city streets to seek medical assistance at a nearby hospital (a martyr image that recalls a foreshadowing shot of a Sacred Heart picture displayed on Yeo-jin’s dresser mantle).

The title of the concluding chapter, “Sonata”, provides a further useful insight into the thematic structure of the film. Alluding through this title to the contrasting movements within a single musical composition, the film is also an illustration of contrasting reactions to similar transgressions. The recurring images of cleansing between Jae-yeong and Yeo-jin are intimate, supportive, and even purgative. In contrast, the image of Yeo-jin’s shower after leaving the hospital – later recalled in a similar shot of Yeong-ki – is devastating, isolated and bereft. In essence, while Yeo-jin and Yeong-ki can see past the failings and imperfections of others, they cannot forgive themselves. Inasmuch as Yeo-jin serves as a passive and enabling protector of Jae-yeong in her seemingly voluntary exploitation, Yeong-ki’s responsibility as his daughter’s guardian and omnipresent watcher becomes more complex and inescapable. Resorting to dispensing small doses of anecdotal parable and recounting cryptic, Fatima-like visions of apocalypse to a preoccupied Yeo-jin as he drives her to school, Yeong-ki does not confront his daughter with his shattering discovery; instead, he turns his grief inward and begins to confront his daughter’s “dates” after their encounters with her. Casting the proverbial first stone onto the car windows of a married businessman (whose daughter is later revealed to be older than Yeo-jin) in a secluded field, Yeong-ki’s innately protective paternal role turns from brooding sentinel to avenging angel.

Having created an early body of work that has polarised audiences with its distilled natural beauty and discomfiting fusion of sexuality and violence, Kim Ki-duk seems to be embarking on a more restrained, introspective and mature phase that began with Spring, Summer, Fall, Winter.and Spring (2003) and continues with Samaritan Girl – two films that, perhaps not coincidentally, not only depict an existential state, but also offer a possibility for enlightenment within it. It is with this refreshing sense of hope, combined with an astute eye for social detail and aesthetic composition, that Kim creates one of the most profoundly moving and strangely transcendent metaphoric images of intruded-upon (and violated) landscape in recent cinema, in the final shot of Samaritan Girl: the errant sight of a wobbling, out of control car struggling to chase a sports utility vehicle through a flooded gravel road in the rural countryside, doggedly navigating the inhospitable terrain using an innate compass that elusively, but transfixedly, points home.

The Samaritan Girl will screen at the Melbourne International Film Festival on 22 July and 30 July.