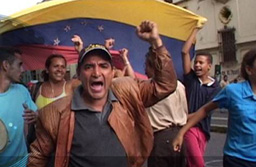 The 11 days of the 17th Leeds International Film Festival delivered a diverse and challenging programme. Leeds has always been adventurous and iconoclastic: the 2002 program included Miklós Jancsó films and retrospectives of Peter Watkins and Lucian Pintile. But such things usually preclude a consideration of the absolutely contemporary. Not so this year: I can’t think of another film festival that has been so intrinsically connected to the particulars of its dateline. But the programmers and Leeds City Council don’t need my congratulations and encouragement; attendance was uniformly high, and the buzz of an event was in the air.

Leeds doesn’t seem locked into the international showcase mentality of the London Film Festival, or the marriage of commerce, culture and identity of the Welsh International Film Festival. Both these festivals represent elements particular to contemporary British film culture; beanfeasts for those in the London and Cardiff media, premieres for locally made and set products, and chances to show off investment prospects for tertiary and media industries in their respective regions. Does the London event have much to show for it? Not really. The post-Four Weddings and a Funeral (Mike Newell, 1994) Lottery-funded (or should that be Lottery-fuelled?) filmmaking “era” rapidly revealed the short-sightedness of the Blair government’s grandiose 1997 dreams for the British film industry. I remember that in the early 1990s one would often hear the sentiment: if only the film industry existed in a palpable form, a dazzling array of British films would appear and once again film culture would be vital and popular, admired abroad and essential to the cultural fabric at home. With the advent of Britpop, and then Brit Art, these questions rose in volume: where were the Britflicks? Alas, when they did arrive, after the initial fireworks (mostly Northern, indeed often launched from the other side of the Scottish border), they elicited another sentiment altogether: if only Royal Court debutantes and well-connected mockneys would stop making these commercially-orientated duds, and look back to the good old days of the 1980s, when cottage-industry films engaged with Thatcher, industrial decline, racial, sexual and class tensions with a measure of box office success…the days of Frears and Jordan, Greenaway, Jarman, and Clarke bringing up the rear…then there would finally be something to be festive about! And, of course, if only such a sentiment had been heard in the corridors of the now-defunct FilmFour Productions. So let me say this: the Leeds festival represents something of a blueprint for the future of a British film culture. Those now in Hoxton bistros and Film Council offices wondering what they could or should be doing would be well advised to keep an eye on the event. 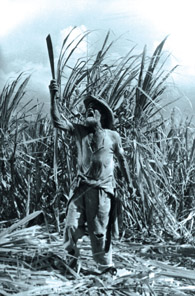 Leeds is a little Blairite itself – the city of the 2003 Conde Nast Traveller award, not the festival; an assembly of towering glass facades around spacious concrete basins, and all the correct commercial outlets, notable clubs and restaurants. In this context, the festival programme is all the more refreshing: galas, the cult, the obscure, the political and (mostly developing-) world cinema. Providing access to films like My Terrorist (Yulie Cohen Gerstel, 2003), Return to Kandahar (Mohsen Makhmalbaf, 2003), DAM / AGE (Aradhana Seth, 2002) and Ford Transit (Hany Abu-Assad, 2003) on a Sunday afternoon is quite an achievement. My initial question, then, was whether the programme was designed around an agenda or a commercial strategy. Seemingly it’s “yes” for both, so that director Andy O’Sullivan noted a substantial audience for his documentary 21st Century Testimonies (2003) – a film with no backer and, as yet, no distributor. Concern arising from globalisation is clearly the ticket right now – and kudos to Leeds for seemingly redefining the very idea of a festival of film in light of this. Robert Newman (fondly remembered from his days in The Mary Whitehouse Experience) whose new book from Verso, The Fountain at the Centre of the World, is a panoramic state-of-the-globalisation satire, presided over the Leeds Underground Film strand: a day of activists’ films, stand-up comedy and workshops under the banner “Sexed-Up, Lies and Videotape”. To a certain extent, after the unprecedented protests of February 2003, any festival that does not tackle such subject matter in a provocative fashion is in danger of marginalising itself. Even the Pentagon has reportedly screened Pontecorvo’s The Battle of Algiers (1967) in recent months. And further praise is due to the Leeds programmers for a focus on Cuba at this ominous time, including screenings of Lucia (Humberto Solas, 1967), Memories of Underdevelopment (Tomás Gutiérrez Alea, 1973), and Mikhail Kalatozov’s extraordinary, lyrical 1965 propaganda film I Am Cuba – now somewhat unfairly forgotten. For me, this provided a rich internationalist context for recent documentaries such as Power & Terror: Noam Chomsky in Our Times (John Junkerman, 2002) and The Revolution Will Not Be Televised (Kim Bartley & Donnacha O Briain, 2003). The latter is one of the must-sees of 2003; a thrilling account of the attempted military coup d’etat in Venezuela in April 2002, the origins of which are still unclear. The film-makers, with a brilliant cool-headedness, used their explosive insider footage to critique the machinations of the commercial media in this matter. The film took the Leeds Audience Award. 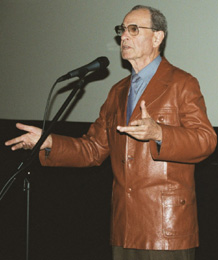 Readers of Senses of Cinema will be particularly interested in the appearance of Vladimir Motyl. Motyl directed one of the most popular Soviet films of the Brezhnev era: the Ostern (“Eastern” – that is, a Soviet-made “Western”) White Sun of the Desert (1970). Leeds presented this on its closing night as the culmination of the Red Westerns strand of the program. For this, the Russian Cinema Council are to be thanked. The Red Westerns are one of a number of projects in recent years to make available the great and the good from the archives. Motyl attended the screening and, with his slightly besieged mentality, brought a chill wind of the Stalinist era to the proceedings. After a couple of minutes of nonchalant and halting answers to post-screening questions from the interviewer, Motyl announced, through his interpreter, that, as a director, his intention was now to direct this event. He ordered the table and chairs to be taken away; he would address the audience directly. Clearly all official channels were suspect. He fielded questions and spoke passionately and at great length to the sizeable audience about the rigours and dangers of making the film; the difficulties of casting; the reception of the film and censorship difficulties (Brezhnev’s favour was curried to avoid its banning) and his relationship to Socialist Realism. This last seemed a little less black and white than he made out. When I later suggested that his compositions reminded me of Dovzhenko and the prototypical worker-and-nature elements of Socialist Realism, the great man didn’t seemed pleased – but I’ll go on record all the same: it’s a populist comedy of types.

Of course, the celebratory as well as the emancipatory was represented: an opening night gala for Stephen Fry’s Bright Young Things (2003), an Anime day (including the blissful retro fantasy from Daft Punk and Leiji Matsumoto, Interstella 5555 [2003]), UK Shorts and Student Showcases (always reliably boisterous), a recital by Derek Jarman’s one-time composer, Simon Fisher Turner, and Night of the Dead III (a dusk-to-dawn horror splurge, which kicked off with the UK premiere of Bubba-Hotep [Don Coscarelli, 2003). This was well-positioned in the Hyde Park Picture House, one of those dank, atmospheric cinemas from a bygone age. It gladdens the heart to think such places are still operating.

“Red Westerns: Westerns Made Behind the Iron Curtain, 1957-1987” is touring selectively in the UK in November.

The Revolution Will Not Be Televised: www.chavezthefilm.com/index_ex.htm