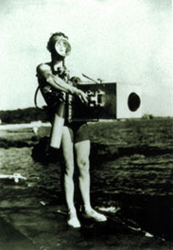 There exists an extravagant flotsam of international cinema; produced at a remove from the more lucrative entertainment industry, or even the prestige of purely aesthetic schools, what might be considered an “expedient cinema” has largely escaped the attention both of film audiences and critics. Never intended for a mass-audience, and without the presage of a Big Noise publicity machine, most of these films have been viewed only unwillingly: by students in science or civic ethics classes, delegates at an industry convention, or trainees within vocational education. Sometimes, these films represent the earliest experiments of filmmakers who’ve proceeded to respected careers in feature filmmaking (e.g. Dusan Makavejev’s 31 shorts for Zagreb Film, or the astonishing sponsored works of the young Fred Schepisi in the late 1960s); more often, they represent the entire celluloid oeuvre of unsung auteurs. If many of these films are unremarkable, the brightest gems are among the most magical works of 20th century cinema, and should be celebrated accordingly. More than this, because these films are typically produced without regard for the prevailing conventions of commercial filmmaking, they suggest the possibility of whole new criteria of cinema aesthetics.

Until recently, Jean Painlevé’s cinema suffered several kinds of critical omission. Short works, almost exclusively documentaries devoted to natural history, his films were neither strictly intended as popular novelties nor as celluloid jargon for academic peers. This fragile balance of tone and method, so enchanting to an awestruck contemporary viewer, provides the clearest precedent for the work of an Anglophone documentarist like David Attenborough; Painlevé gives a fabulist’s account of the enchanted marginalia of animal life and behaviour. Painlevé’s early films measure the wide-eyed wonderment of childhood against an implicit scientific purpose. There’s an undeniable pedagogical function, but it’s by way of an enthusiast sharing his passions – for alien, largely underwater fauna – with a neophyte audience. In the years immediately after World War II, those innocent attentions become the impartial observations of a pondscape ghoul – but undiminished are the seriousness with which Painlevé attends his subjects, and the abundant wonder that proceeds from their scrutiny. Happily, by the close of the 1940s Painlevé had more completely recovered his whimsy; once more he surveys the world both with one eye of innocence and another of unflinching verite rigour. 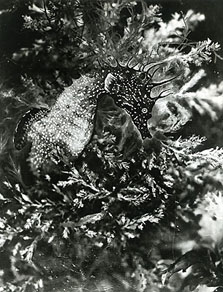 As children, the works of the naïve French naturalist, Jean Henri Fabre, had alerted future Surrealists like Painlevé and Buñuel to the ubiquitous eroticism and atrocity of their immediate microcosmic environment; but Fabre’s projection of human motivations onto household insects was an analogy soon to be overturned like Kafka’s Gregor Samsa. Rather than simply seeking for tentative affinities with humankind, Painlevé’s fascination seems provoked instead by what is most completely alien in his aquatic cast. Indeed, Painlevé had such an avidity for a striking piscine gesture that he privileged his greatest affections for the most anomalous of underwater animals. Seahorse provided one lucrative inspiration; his 1934 film, L’Hippocampe (The Seahorse), was his greatest commercial success. That success provided the capital for a popular line of seahorse jewellery. Octopi were another early inspiration, but after documenting them in 1928 Painlevé would return to the subject in stunning fashion almost four decades later. Amours de la pieuvre (Love life of the Octopus, 1965) is among the most curious of Painlevé’s films; not the least for the soundtrack, composed by the French pioneer of electronic music, Pierre Henry.

Jean Painlevé’s films could be said to provide an elliptical anthropomorphism; just as The Seahorse – with its scenes of dramatic birthing, by pregnant males – might be an affectionate acknowledgement of his widowed father, so Assassins d’eau douce (Freshwater Assassins, 1947) makes its unsentimental allegory for six years of total war. Anthropomorphism isn’t unknown in these films, but it’s an ambiguous extension, more often rendered ludicrous by a jaunty musical accompaniment. After 20 minutes’ sober exploration of starfish biology and behaviour, Les Danseuses de la mer (Dancers of the Sea, 1956) concludes by a lobster’s twitching papillae directing a starfish’s flailing like some alien Terpsichore. Viewed in macroscopic close-up, Painlevé’s Fresh Water Assassins might be pond life as imagined by HR Giger: fresh-water shrimp and scorpion beetles devour the unhappy wayfarer, and their nearest kin, with equal gustative relish. With its raucous hot-jazz soundtrack, the nearest correspondence to human attributes achieved by the subjects of this later film are some vigorous death-spasms, choreographed to tub-thumping drum solos.

Unsurprisingly, the casual brutality of Fresh Water Assassins recalls a bitter war and nazi occupation. This film is only one of several portmanteau documentaries from post-war France; each, in turn, describes an ecology premised on expedient, routine slaughter. Within four years of the Liberation, Georges Franju’s remorseless study of a suburban Paris abattoir, Le Sang des Bêtes (The Blood of Beasts, 1949), would serve European audiences a chilling reminder of their own tacit collaboration. Painlevé prepared the narration for this film from Franju’s script, and Franju’s affection for his music-loving, sea diving co-writer might explain one incongruous soundtrack detail. The diegetic appearance of Charles Trenet’s then-hit, Le Mer, is sufficiently jarring with the gruesome imagery to seem almost gratuitous: for in the suburbs of Paris, Trenet’s tune resounds in horrifyingly ironic counterpoint to the sea of blood being spilt before our eyes.

Jacques Cousteau, too, would begin making films at the War’s end; his debut, Les Epaves (Shipwrecks, 1945), surveys the haunted seascape of Marseilles harbour. Cousteau was at work on underwater salvage of these recent wrecks – the harbour had to be cleared in advance of the resumption of sea-freight, and the Republique desperately needed the recycled steel after five years of Nazi rapine. Like Le Sang des Bêtes, and Painlevé’s own Le Vampire (The Vampire, 1945) and Assassins d’eau douce, Cousteau’s film is a creative response to the war; but its lyricism suggests the influence of Painlevé’s pre-war works, and anticipates the gentle temper to which Painlevé would shortly return.

If Cousteau would shortly discover a fascination for hydrophone recordings of aquatic audio, Painlevé was auditioning his subjects with an ear to popular appeal from the very advent of sound cinema. Like his friend, the vanguard composer Edgard Varese, Painlevé was a fellow traveller to the Paris Surrealists who struggled to reconcile his avidity for music with André Breton’s doctrinaire deafness. The increasing rigidity of Bretonian edict must have rankled Painlevé’s habitual refusenik, but ultimately it was Breton’s refusal to invest a greater significance in music which catalysed Painlevé’s departure from the Surrealist ranks.

Specialist audiences were scandalised by the soundtracks to Painlevé’s films – presumably, to Painlevé’s own considerable delight. The Vampire – Painleve’s exploration of the vampire as a biological archetype and his cheerfully morbid allegory for nazism – is enlivened by Duke Ellington’s ‘Black and Tan Fantasy’ and ‘Echoes of the Jungle’. Painlevé’s fascination for octopi was as great as his partisan tastes for experimental music, and both are brought into compelling relief for his Love life of the octopus. The score for this film was commissioned from the French pioneer of musique concrete, Pierre Henry; and Henry’s sonorities are delicately matched to the action transpiring on the screen. If only a small part of Love life of the octopus is devoted to the inconceivable erotica of amorous octopi, through the fluid grace of an eight-arm embrace and the silken glance of an inscrutably bulbous eye those sequences are rendered genuinely erotic. Henry’s music would’ve been incongruous in most other cinematic contexts, but in this film his early electronica is perfectly matched to the stunning grotesquerie of the image.

For Painlevé, these soundtracks were a means of enhancing the popular appeal of films expressly intended for a wider audience: but this music also functions as an “irrational enlargement” of aquatic gestures framed in the camera lens. Back on shore, a fascination for the gestural logic of naked, animate instinct culminates also in L’Ecriture du mouvement (A Notation for Movement, 1949) – a graphic notation of human dance movements. Painlevé raucously investigates the abundantly visible strangeness of all these animals, and this marriage of sound and image is a festive celebration of natural history’s most unlikely menagerie.

Painlevé, the instinctive anarchist, found his natural partner in Genevieve Hamon; together they collaborated on almost 200 films until Painlevé abandoned filmmaking after Hamon’s death. The aquatic wilderlands they trawled, and the data they gathered there towards a census of this planet’s most exotic inhabitants, testify to a genuinely ‘magic realism’ at the periphery of consensual perception. These films are now restored to a wider audience, but their example should teach us vigilance to the unheralded possibilities of cinema, past and future.

The Museum of Contemporary Art (Sydney) is currently exhibiting the most extensive collection of Jean Painlevé’s work ever seen outside of France, within its ‘Liquid Sea’ exhibition. In support of this exhibition, Brigitte Berg, Directrice of Les Documents Cinematographique, Painlevé’s Paris archive, and co-editor of “Science is Fiction: The Films of Jean Painlevé” (MIT Press), recently introduced a screening of Painlevé’s films in both Sydney and Melbourne.