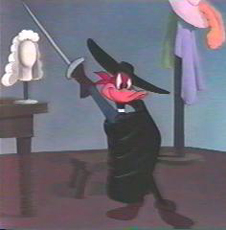 Since his first appearance in 1937, Daffy Duck has perpetually been the number two cartoon star on the Warner Brothers lot. It’s as if Porky Pig passed the “top star” baton directly to Bugs Bunny after the release of A Wild Hare (Tex Avery, 1940), and Daffy never got a chance to run with it himself. And if he really had an existence outside the films he’s been drawn in, this fact would frustrate him terribly. Daffy, in the hands of director Chuck Jones and in the minds of cartoon fans worldwide, is the personification of insatiable ambition; simply being the second greatest cartoon star for the greatest cartoon studio could never be enough for him.

We know Daffy this well in part because Jones drew him as if he did have an existence outside his starring roles. In The Scarlet Pumpernickel Daffy appears as a masked swashbuckler in the Errol Flynn mode. He outsmarts his enemies, rescues the fair Melissa, and wins the day. But Jones frames these escapades with scenes of Daffy, as himself, cartoon star for Warner Brothers, pleading with J.L. (studio chief Jack Leonard Warner) for a chance to stretch his acting ability beyond loony comedy.

It’s no coincidence that Jones chose an Errol Flynn-style parody to kick off a series of cartoons in which Daffy attempts to take on heroic roles in times, places, and genres far removed from the duck hunting ground of his birth (1). Jones often mentioned Flynn’s name along with that of Dorothy Parker, Groucho Marx, and others when describing the character of Bugs Bunny, while also noting that Bugs is the comic hero that we all wish we could be (2). Surely Daffy must share this wish.

It’s easy to imagine a scene just prior to the opening of The Scarlet Pumpernickel in which Daffy attends a company screening of Rabbit Hood (Chuck Jones, 1949), sees Bugs up there on screen with Flynn himself, and storms out of the theatre in a jealous huff, vowing to convince “J.L.” to let him star in his own Flynn-flavoured picture. But of course the duck has misinterpreted things; Bugs looks great as usual in Rabbit Hood, but he doesn’t need to become Robin Hood to defeat the Sheriff of Nottingham. He doesn’t even need his help. The film’s repeated pronouncement “Robin Hood Will Soon Be Here” is almost a non sequitur in the context of Bugs’ effortless humiliation of the gangly Sheriff. Bugs wins by himself, by being himself. In contrast, when Daffy tries to take on Flynn’s role in Robin Hood Daffy (Chuck Jones, 1958), he can’t even get Friar Tuck (Porky Pig, less naïve than usual) to join his cause!

Daffy’s role as the Pumpernickel is probably the closest he ever came under Jones’ watch to actually fulfilling his heroic fantasies. He lasts the entire picture without losing his dignity (much of it, at any rate)! But Daffy’s role as Self-Promoting Actor is another story entirely. Jones knew that “Daffy’s entire persona is based on lack of success” (3). Thus, J.L. never gives the go-ahead, and in fact the cartoon ends with the duck’s ultimate degradation: a shot often cut from television broadcasts in certain countries.

Jones enjoyed placing his other characters in different roles, too. For one, Wile E. Coyote has had opportunities to try out new character variations. When facing off against Bugs Bunny in films such as Operation: Rabbit (Chuck Jones, 1952) he becomes a loquacious, self-promoting “genius” quite different from the mute role he plays in the Road Runner pictures. Also a departure are the seven films starting with Don’t Give Up the Sheep (Chuck Jones, 1953) in which he played red-nosed Ralph Wolf, would-be sheep rustler and not-so-worthy opponent to Sam Sheepdog.

These films contrast strongly with the Coyote/Road Runner pictures in a number of obvious ways, such as the green, pastoral setting and the characters’ ability to talk (though the films are dialogue-sparse). The gags are physical in nature, like those of the Road Runner cartoons, but the differences in character and motivation of the players forces the specifics to change. For one, while the Coyote wants to catch the Road Runner, Ralph wants to avoid the Sheepdog at all times, instead focused on a third party: an anonymous sheep. Sam is also an essentially stationary foe; though he does possess the seemingly mystical ability to be right where Ralph doesn’t want him, he is almost never shown actually going anywhere.

Most notably, Ralph Wolf differs from his usual Wile E. Coyote persona in that his approach to the pursuit of sheep is purely professional, not obsessional as is the Coyote’s quest for the Road Runner. Ralph and Sam are shown to be friends outside of work, only interested in pummelling, pounding, and pelting each other with TNT after the morning whistle blows. It may be possible to detect a faint whiff of melancholia in the Sheepdog’s demeanour, as he is forced to continually lay defeat to his friend day after day. If so, it only adds to the tension and the humour of the character. Duty first!

Steal Wool is arguably the cartoon in which the series hits its stride; it’s certainly among the funniest. After this one, the final gags for these cartoons become increasingly surreal, perhaps in an attempt to try to top the hilariously disastrous slingshot gag here.