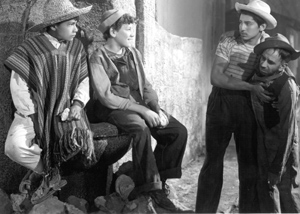 Los Olvidados is the odd bird of Luis Buñuel’s long, many-complexioned filmography, the film where Buñuel’s favored protective defenses, surrealism and satire, come crashing down, exposing a heart sharply attuned to the injustice of poverty. One of the reasons Buñuel is so difficult to categorize is that over the course of his career as a filmmaker, he went through three easily differentiated major phases – the surrealist, the low-budget Mexican filmmaker, and the elegantly satirical, continental European sage. Buñuel’s films are all characterized by a horror at the world’s cruelty, but for the greater part of his career, he submerged it under a veneer of sophisticated distanciation.

Los Olvidados, released in 1951, is the only film in which Buñuel takes off his mask of sophisticated removal to reveal the true grimace underneath. Over an opening montage of the delights of the global metropolis – the Manhattan skyline, Big Ben, the Eiffel Tower – the narrator sets the stage for the narrative to come, solemnly providing the film’s motto: “behind every beautiful city are poor children.” In one of the film’s early scenes, setting the plot in motion, Jaibo, the sly, intelligent gang leader, beats his rival Julian to death in the shadow of a half-built high-rise building. The city may be in the process of progressing toward some unimaginable future, but one constant is that the downtrodden will be left behind by any such progress.

The plot concerns Jaibo and his associate, Pedro, and their efforts to evade punishment for Julian’s death. Pedro seems overwhelmed by his older, larger, and more brutal friend, unable to escape from his grasp anywhere. The film has the nightmarish clarity of a waking dream, with Pedro, as audience surrogate, unable to avoid the cycle of poverty, desperation, and crime. He is abandoned by his mother and by society, left to fend for himself at an absurdly young age. In Pedro’s dream, the most famous scene in the film, the disturbing sight of Julian’s bloody dead body under the bed is offset by the pacifying visage of his mother, soothing him, “Listen, you’re not that bad. I’d like to be with you all the time.” Pedro offers to work in support of his mother, but wonders why she refused him any of the meat she had served to her other children. She smiles, and walks in his direction in slow motion, a rotting slab of diseased-looking meat in her hand. As she walks, a long, distended hand emerges from beneath the bed, looking supernaturally extended as it grasps at the meat. This hand is revealed to be Jaibo’s, at which point the dream ends.

The dream exposes the rot that lies even at the core of Pedro’s fantasies. His mother’s love is itself rotted away, and Jaibo’s need to possess what is rightfully the property of others results in Pedro’s downfall, and his own. Jaibo instinctively knows Pedro’s desires, and fears, and preys on his vulnerability, having been an unwilling accomplice in Julian’s murder. He is the Id run amuck, acting out where Pedro instinctively recoils. The two protagonists can be seen as halves of the same whole, with Jaibo the destroyer, and Pedro (at least attempting to be) the constructor. Jaibo’s seduction of Pedro’s young, lissome mother is a form of Oedipal seduction, acting on the half-buried wish of his accomplice’s dream. Pedro can never successively avoid Jaibo because he is a manifestation of his own ugliest desires. In the film’s most harrowing scene, Pedro, in a juvenile work farm, is given 50 pesos by the headmaster to walk to the corner store and buy cigarettes. His initial hostility melts into disbelieving joy that he has found a place where others trust and respect him, and Buñuel cues our reaction with a swelling burst of triumphant horns. As Pedro struts down the street in the direction of redemption, the horns suddenly turn dark, intimating the tragedy always lurking in this film, and as if on cue, manifesting from nothingness, Jaibo emerges, demanding the 50 pesos.

In Los Olvidados, sexuality consistently gives way to violence as a driving force of society. The closing sequence proceeds with the inexorable logic of the preordained. Pedro, unable to return to the farm, seeks a hiding place, but ultimately finds none. The poor of his neighborhood, equally downtrodden, cannot see beyond the length of their own miseries toward those of others, and treat Pedro with the same hostility and malice the better-off have already demonstrated. Poverty, it seems, is no guarantee of humanity in Buñuel’s world. Pedro is ultimately tracked down by Jaibo, and killed. Soon after, the same fate greets Jaibo. In the film’s final, Buñuelian, irony, Pedro’s mother roams the streets, calling out his name, not noticing the passing cart ushering his body to the final resting place of a nearby ditch.

Los Olvidados marks a unique moment in Buñuel’s work. Following this film, the focus of his work shifted toward the lives of the bourgeois, and his coolly jaundiced eye roamed the estates and mansions of the frivolously wealthy. Buñuel developed an ironic, detached viewpoint, from which he could safely watch these outrages. Buñuel’s anger at the world’s horrors never dissipated; it simply moved below the surface. But Los Olvidados is the one Buñuel film where he unabashedly gives a hoot, and its bitter power is unforgettable.