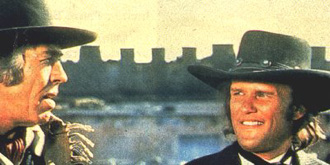 David Samuel Peckinpah was born February 21, 1925 in Fresno, CA. In World War II he enlisted in the Marines, although he never saw combat. Following his release, he became the protégé of Don Siegel. In the late 1950s he worked in TV before turning to feature films. After years of hard living he died of a heart attack on December 28, 1984 in Inglewood, CA.

Fleshing out this schematic portrait, Peckinpah was noted for his Westerns set along the edge of modern civilization. His heroes are caught in a changing world where individualism is a liability and violence an easy reflex. Often this tendency further abets obsolescence or else outright destruction because, in the director’s own words, “There is a great streak of violence in every human being. If it is not channeled and understood, it will break out in war or in madness.” (1)

Once Peckinpah’s loners become outlaws, “the individual survives through his ability to analyze his chances realistically and then make his play as fairly as the circumstances permit.”(2) The result is a theme upon which all his work turns, just as its ready-made solipsism reflects on the director. Thus Peckinpah’s films alternate between triumph and failure, typically depending on the balance struck between his alcoholism and the strength of the property in question.

After a praiseworthy debut in The Deadly Companions (1961), his sophomore effort, Ride the High Country (1962) was, and still is, considered a masterwork of the Western form. Major Dundee (1965) followed as both a critical and commercial failure wherein Peckinpah’s producer, Jerry Bresler, released the film with drastic cuts as one half of a double feature. Several years lapsed without similar work before Peckinpah was attached to The Wild Bunch (1969). Upon its release critics and fans polarized into a field of detractors and supporters, earning him the nickname “Bloody Sam” due to the film’s graphic violence.

Four films followed in the next three years. Straw Dogs (1971) and The Getaway (1972) were bonafide hits preceded by the little seen The Ballad of Cable Hogue (1970) and interrupted by the Steve McQueen vehicle, Junior Bonner (1972). Then there appeared a Billy the Kid project at MGM. Although warned against it, Peckinpah agree to the project for $228,000 and profit participation (3), meaning the highly idiosyncratic, hardheaded, boozer-turned-artiste terrible, was being asked to produce a film about an idiosyncratic, hardheaded boozer-turned-American hero.

Originally undertaken as a project for director Monte Hellman, then associated with MGM for his film Two-Lane Blacktop (1971), Rudy Wurlitzer’s script for Pat Garrett & Billy the Kid was offered to Peckinpah following the commercial failure of Hellman’s film (4). It detailed the final days of William Bonney and was largely based on the historical record.

Choosing simultaneously to embrace the Kid’s legend while attempting realist detail, Peckinpah spun Pat Garrett into a tragic character epitomizing compromise and released Billy into the stratosphere of idealism. Each man therefore echoed the other in a tale of opposing codes and moral equivalents meant to inhabit an even larger canvas than The Wild Bunch.

Signed to play Billy, Kris Kristofferson was a Rhodes scholar and former Air Force Captain. Also a successful country musician, he’d appeared in The Last Movie (Dennis Hopper, 1971) but it was his role in Cisco Pike (Bill L. Norton, 1972) that led to Pat Garrett & Billy the Kid. Opposite him as Pat Garrett was James Coburn, a bit player from Major Dundee, who was possessed of gaunt cheeks, gray-white hair and a gravelly voice.

Bob Dylan was the final ‘star’ cast in the minor role of Alias. First courted to compose the film’s soundtrack, including use of his song “Knockin’ on Heaven’s Door,” producer Gordon Carroll signed Dylan for his feature debut, Don’t Look Back (D.A. Pennebaker, 1967) notwithstanding.

All appeared well by the fall of 1972. Rewrites, while painful to Wurlitzer, were accomplished. A cast and crew of Peckinpah veterans were assembled. Locations were scouted and the production schedule negotiated until the buck stopped at MGM President Jim Aubrey.

A graduate of Princeton, Aubrey was groomed at CBS where he’d become president in 1959. Over the course of his years there he’d been a tight-fisted manager with unknown creative sensitivities. Once billionaire financier Kirk Kerkorian hired him in 1969 to manage MGM, the pearl from one of his acquisitions, the “smiling cobra,” as he was dubbed, moved center stage. (5)

Like all the Big 5 Studios from the Classical era, MGM was in decline. Aubrey arrived to staunch the flow of debt, not only from failed films and TV productions, but also from Kerkorian’s leveraging of studio assets to build an MGM-themed Las Vegas casino. Into this context of corporate decline and conglomeration, Pat Garrett & Billy the Kid was green-lighted for production in Durango, Mexico. At its helm was the iconoclastic auteur, Sam Peckinpah, a likable analog to Billy the Kid. At its stern was Jim Aubrey, the echo of sell-out Pat Garrett, readying for big-time box office without a parachute for failure.

Pioneer with a Pistol

“Best of enemies. Deadliest of friends.” So read the film’s tagline and therein its plot. Not only was Pat Garrett a former confederate of Billy the Kid, he was also the man forced through changing circumstances to run-off, or else kill, his friend.

Opening in 1909, Pat rides with a former associate named Poe (John Beck) who ambushes and kills him, each shot delivered in slow motion with cross-cuts of chickens buried up to their necks for target practice. Flashback to 1881. Billy and his gang are seen shooting the chickens when Pat rides up for some whiskey and to tell Billy how things have changed.

Where the pair of outlaws had once ridden against landowners encroaching on the open frontier, especially the cattle rancher John Chisum (Barry Sullivan), Pat has taken the job of Sheriff of Lincoln County, New Mexico. He’s thusly become part of the establishment, his directive to rid the landscape of Billy and his ilk. Soon afterwards Billy is captured, only to escape from Pat’s minions, whereupon the two begin a reluctant chase. Naturally, complications ensue as the calling of Billy’s outlaw code falls into conflict with Pat’s sense of compromise.

Peckinpah sees the Old West’s decline as a strange and troubling occurrence, a time, when established chaos yielded painfully to a dubious new order. The Growth of empire – social, financial, governmental – underlies his view. Yet he worries most about those excluded by the growing empire, men whose natural language is one of hopelessly self-seeking violence. (6)

To wit, the innocent and guilty die side-by-side while Billy fights off roaming gunmen and Pat builds a ragtag posse. Along the way Governor Lew Wallace (Jason Robards) is asked to intervene as Billy becomes a target for reluctant lawmen like Sheriff Baker (Slim Pickens) and a friend to hangers-on like frontier vagabond Alias.

In the end, Pat triumphs. After allowing Billy one final embrace in the arms of his lover Maria (Rita Coolidge), Pat kills him for the promise of a long life filled with regret.

An uneven film, Pat Garrett & Billy the Kid is filled with Old West tableaux punctuated by slow motion shoot-outs and paint-filled squibs. Throughout the production design contributes to historical immediacy, almost as if the filming of 1881 were subjected to documentary impulses. Flies circle. Sunshine washes out the scenery. Men play poker and drink whiskey.

While little can be made of the central performances, save for inhabiting the archetypal dichotomy of individuals versus society, Coburn’s weather beaten features are magnificent. Less can be offered to Kristofferson who’s several years too old for Billy, a 21-year old when he died, and the appearance of Dylan, Robards, Pickens et. al. is little more than a pleasant distraction.

Where the movie soars is in its gunfights and subtle characterization of defeated men marching to their end. The former strength is ably displayed when Billy breaks out of Pat’s jail, killing a deputy with 16 dimes seen individually bursting from a shotgun barrel. The latter trait is later epitomized when Pat shoots Billy and then fires on his own mirror image. His killing rage ended, the second bullet signals the death of his conscience and the better part of himself.

Once lauded for his spirited independence, Peckinpah was now derided for being a drunken egomaniac unable to responsibly direct a movie. Not to be overlooked, Aubrey was called out for being a banker-for-hire in whose studio money continued to hemorrhage as a result of skewed priorities. Heedlessly, they fell on one another’s sword, each to his ruin.

When simmering tensions exploded in the spring of 1973, Peckinpah had already delivered two versions of his director’s cut. Based on negative previews, Aubrey assigned a host of editors to the picture and began retooling it without benefit of a unified vision. In effect, the career bureaucrat recognized a troubled investment and wrested control away from its creator to deliver a viable product. According to Rex Reed, “Mutilated editing, clumsy casting, terrible acting, abominable dialogue – a check-list of all the things wrong with this dumbbell of a movie reads like a primer on how not to make a western.”(9) Nevertheless, Aubrey’s cut was released.

Running 106-minutes, the original theatrical print is absent the bookend sequence of Pat’s death. This fundamental change, while purposefully focused on the more violent sequences for which Peckinpah was famous, meant the depth of pathos in the picture was rendered schizophrenic.

Variety commented, “Whereas Peckinpah’s nostalgia for a frontier world where might was right and women were for the taking has previously been communicated via forceful acting and striking visuals, here there are few graces to camouflage the narrative banality.”(10) Judith Crist called the film, “a new low in pointless moviemaking,”(11) Tom Vallance referred to it as “an almost total disaster,”(12) and Vincent Canby specified, “The music is so oppressive that when it stops we feel giddy with relief, as if a tooth had suddenly stopped aching.”(13)

Stung by failure, frustrated by Aubrey and ostracized for bad behavior, Peckinpah arranged for his director’s cut to be stolen and stored in his personal vault (18). Discovered only after his death, this longer version was first screened for the public on April 20, 1986. Running 122 minutes, it includes the Pat Garrett framing device, a more muted use of Dylan’s soundtrack and several other sequences that have since been considered integral to the picture in this, its signature form.

Upon wider release, a cult of director’s cut aficionados and scholars sprouted. Remarking on this later picture, J. Hoberman wrote, “the abundant violence and leathery camaraderie, ritualistic killing and mucho macho posturing, the incidental cockfights and lipsmacking whiskey guzzling, the rub-a-dub-dub, four-whores-in-a-tub partying and the towheaded kids who amuse themselves by swinging on the hangman’s noose are all pure Peckinpah.”(19)

To fans, Hoberman’s near-insult summation is little more than an invitation to see the film. Already a mythologized title from the early 1970s, Pat Garrett & Billy the Kid may very well be Peckinpah’s final masterwork before the decline of his later years and early death.