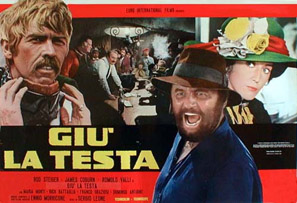 [Leone] doesn’t hide the inconsistencies, the cliches, myths, and rituals of the Western – he drags them out into the open, explains how they work, and then asks us to accept them anyway.… It takes a pretty talented and audacious director, but after all, why not? Westerns have been on the defensive for too long. If a magician can’t tell you what he’s going to do before he does it, he’s not a very good magician.

I want to work against the bad habit of having to simplify and explain everything. If one writes that Leone resurrects the old myths and makes them even larger, that’s true…I made 58 films as an assistant – I was at the side of directors who applied all the rules… I react against all that and so close-ups in my films are always the expression of an emotion.

I came across A Fistful of Dynamite late in life at the Melbourne International Film Festival in 1997. It is pathetic to admit, but at that time, I had only just come to appreciate fully the genius of Sergio Leone. I remember when I was about 18 (17 years ago), I went out with a first generation Greek-Australian guy who really loved westerns, particularly Leone’s westerns. He, together with his brothers and father, would laugh hysterically nearly all the way through these movies. They had obviously watched these films so much, that they could anticipate what was about to happen. The silent smiles would turn to moments of leg slapping and raucous laughter, drowning out the soundtrack so that a virginal viewer such as myself struggled to make sense of what was going on. I couldn’t understand what he liked about them. I hated all the hammy acting and the ridiculous machismo, and most of all, I found his ability to find humour amidst all that “gun-toting” violence a little disturbing. During those video nights, I’d prefer to hang out in the kitchen with his Mum. But, many years and all kinds of movies later, I too love to watch Leone’s films – for their exquisite beauty, their intelligent scores, but most of all, just to have a good laugh at the characters and the situations that Leone inserts them into. It’s only now in retrospect too, that I realise that by laughing, my ex-boyfriend was actually celebrating “masculinity” both privately and with the male members of his family, thereby establishing his own strong sense of manhood. But most of all, by identifying and laughing at the characters in Leone’s films, he learned to laugh at himself, something that at the time, I had not yet learned how to do. Now, as I laugh at Leone’s absurd take on human nature in those imaginary worlds of Americana that refract the even more absurd realities of the world I live in today, I have discovered an extra layer of sentimental attachment to them. And as I watch Rod Steiger in A Fistful of Dynamite especially, I cannot help but think fondly of that big, colourful, hilarious, lively man and mourn his passing.

If I were forced to choose one Leone film from his oeuvre to take with me to a desert island, A Fistful of Dynamite would usurp the magnificent Once Upon a Time in the West (1968). Why is this the case? I love the unpolished aspects of A Fistful of Dynamite – it has a rawness that is irreverent, making it all the more real and therefore darkly comic. The film’s setting and characterisations of Mexicans in a hyper-real, revolutionary “Mexico” is, as Christopher Frayling has identified, never about “the Mexican Revolution, but the Revolution as a symbol, only interesting in this context because of its fame and its relationship with cinema” (3). With each viewing, I increasingly became aware of how Leone very cleverly plays on our post-colonial notions of “empire” with his rendition of “Mexico” and “Mexicans”. As Frayling says, until Leone came along, “Mexico tended to be presented in American cinema as a place of escape, a refuge; a noisy, exotic alternative; a place for seeking lost ideals; and (its most characteristic role in silent movies) as a breeding ground for particularly vicious bad guys” (4). Yet, for me it is Leone’s portrayal of the growing friendship between Sean (James Coburn) and Juan (Rod Steiger) that makes this film such a treasure. Its deep exploration of character “for character’s sake” as opposed to pure narrative exposition is unprecedented in Leone’s work up until this point – a genuinely loving, intriguing tale of male friendship that generates its power and pathos more from gestures, silences and exchanged looks than “action”. It is a remarkable recipe that Leone then understandably and rightly takes years to hone and perfect for his final opus, Once Upon a Time in America (1984).

Given the special place this film holds in my heart, I therefore find it odd, looking back through reviews at the time of its release, to see that it wasn’t well received. In fact, most reviewers’ engagement with it seems to have faltered at an early scene where Juan, literally acting the archetype of the peasant buffoon, is belittled by a group of aristocrats on a stagecoach eating lunch. As one reviewer surmises:

The film’s previous title, Duck, You Sucker, hinted at more comedy than Leone supplies. Nevertheless he dispenses a tough merriment from time to time. Partial to enormous close-ups on almost any pretext, he derides unpleasant characters in the story by filling the Techniscope frame with their mouths, which become unattractive orifices, grotesquely munching fruit, baring fangs in a vulpine grin, or slobbering with toothpaste…Chiefly because of the incredible length of the film, the initial high spirits deflate into an occasionally ponderous gloom… Leone fans are bound to get enough of what they want . (5)

Andrew Sarris cut deeper at the time, calling the film a horse opera “with the emphasis on opera”, but interestingly goes on to applaud Leone for his audacity and ambition in such an “era of emotionally paralysing filmmaking.” (6)

Certainly, choosing to make an extra-chunky “spaghetti Western” like A Fistful of Dynamite at this time in his career did little to help him regain the reputation of an inspired master director – rather it helped to pigeon-hole him as a genre auteur. This must have felt all the more suffocating given the poor box-office takings and subsequent studio butchering of his previous “love”, Once Upon a Time in the West (7). Even Peter Bogdanovich, a film buff/critic who at one time was meant to direct A Fistful of Dynamite after the success of his debut film Targets (1968), totally missed the point of Leone’s later works (8). Dismissively comparing him to that other great canonical (read ”high-brow” and white) Western director, John Ford, Bogdanovich exclaimed; “there’s no poetry in them. The problem is they do in a way reflect a change in American mythology; and they’re rather Fascist by implication” (9). It is of little wonder then that Leone felt for A Fistful of Dynamite “as one might [feel for] a disabled child.” (10)

However, with the advantage of hindsight, I speculate that the real reasons behind this film’s critical failure were two-fold. Firstly, the film touched on some deep-rooted post-colonial issues between Americans and Mexicans that remain a source of discomfort to many today. Secondly, could the critics have felt that Ford’s mantle was threatened by (insert a pregnant pause followed by dramatic music here)…a brilliant “wop”? That is, someone who can recognise the true nature of the (re)presentation of democratic America through the mythology of the West precisely because he is an outsider looking in? As Leone himself once explained, being a Roman always marked his difference: “We have behind us a vanished empire and the knowledge of all the stupidities we have been guilty of down through the centuries. Moreover, we have the historical evidence of our empire scattered all through the town, as permanent proof of our errors.” (11) Thus, he necessarily saw himself as a fatalist rather than a dreamer, and his films mirror the life lessons he learned from that perspective – reflections that many Americans have yet to recognise in themselves. This is a sentiment (albeit expressed a little less inflammatorily) I share with Adrian Martin, who speculates after exploring the similarly flat critical responses to Once Upon a Time in America, that Leone’s brilliance is attributable to his

shameless mixture of sublimity and pulp, the sacred and the profane. This is partly a result of Leone’s unique position and intervention in cinema history. As an artist looking around and flexing his muscles… Leone embraced the truly ‘plebeian’ depths of popular culture – his own, Italian popular culture as much as the ‘exotic,’ romantic American culture he cultivated as a fan. That led him, quite naturally, to vulgarity, farce, low sexual humour and “comic book sadism”. It was a sensibility that stirred – and can still stir today – an inevitable frisson in respectable film cultures (12).

Then again, maybe it’s simpler than this. Thinking back to my opening anecdote, maybe it’s just that many people took themselves and cinema just a little too seriously. For as Leone quite rightly countered about his ‘excessive’ use of close-ups in an interview conducted around the time of A Fistful of Dynamite‘s release in 1971:

The audience has no rights other than to take its place with regard to the character and the story… It’s two characters in the film that are making it, so in fact I have two directors with opposing conceptions as to the staging. They have the camera in their hands. While shooting, I just put myself in their place, and their two fantasies co-exist and meet within me. (13)

To me, this quote should serve as an epiphany to all those Leone nay-sayers and doubting Thomases. It should make you admire Leone all the more; it takes guts to make films in this way. You understand that to Leone, making films wasn’t a job – it was a god-like calling to which he was enslaved. And once you appreciate A Fistful of Dynamite from this perspective, it should be promoted into the pantheon of great cinema, for despite its roughness, it is without question, “the best, and the most comic, of Leone’s essays about the American west, and it deserves serious consideration”. (14)