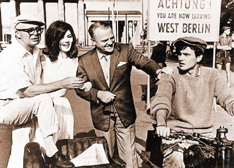 Imagine for a moment a party, a somewhat elegant affair, populated solely by characters from the films of Billy Wilder. Over there at the piano, swirling a drink, is the doomed Walter Neff from Double Indemnity. He’s trying not to stare at the effervescent Sugar from Some Like it Hot. Fran Kubelik and C.C. Baxter from The Apartment dance closely to some postmodern jazz in another room, while Norma Desmond from Sunset Boulevard descends the main staircase to join the flinty and ambitious Chuck Tatum from Ace in the Hole. And outside, hiding in a tree on this moonlit night, yearning for a glimpse of David Larrabee, studying every movement in this full house of wild different characters, crouches the lovesick Sabrina. What an evening it would be.

On Wednesday March 27, 2002 in Beverly Hills California, Billy Wilder died at the age of 95. At this moment the world lost one of its great artists, but the legacy of his films lives on. Wilder was a complex and contradictory artist whose work revealed many paradoxes. He was a chiaroscuro artist – telling stories that shifted moodily between light and shade, between moments of luminosity and passages of intense darkness. As Cameron Crowe noted, quoting from longtime Wilder collaborator I.A.L. Diamond, “the Wilder touch was a combination of sweet and sour”. (2)

The biographical details of Wilder’s life are as vibrant as his film scripts. Wilder was born Samuel Wilder in 1906 in Sucha, a village in Galicia, an Austro-Hungarian province that is now part of Poland. It is well documented that his mother loved all things American and nicknamed her son ‘Billie’ after Buffalo Bill. The young Billy briefly tried to fulfill his parents’ other dreams by studying law. But he very quickly changed vocations and started working for a tabloid newspaper. Stories from this period in his life abound. Wilder was a big jazz fan as well as a dance gigolo. Both these pursuits found their way into his writing, as well as motivating his subsequent relocation to Berlin. From 1927 through to 1929, he learnt his craft by ‘ghostwriting’ on an estimated 200 scripts. His first official screenwriting credit was for The Devil’s Reporter (Ernst Laemmle, 1929), and this was followed by writing and collaboration credits on a number of early sound films. In 1933 the Nazi ascendancy caused him to flee from Germany to Paris, and finally to emigrate to America in 1934. Wilder was the last surviving member of a group of similarly exiled ‘magicians of the cinema’ that included Fritz Lang, Max Ophüls, Otto Preminger, Douglas Sirk, Edgar Ulmer, Robert Siodmak and Fred Zinnemann.

Words were Wilder’s genius. And yet when he arrived in America he had to learn the nuances of his new country’s language. This led him to two long-term screenwriting collaborations that have been justifiably celebrated. The first was with Charles Brackett, a novelist, drama critic, and Harvard-educated Republican. Wilder started working with Brackett in 1936 and over the next 12 years they collaborated on many screenplays. Two of their notable writing credits were for Ernst Lubitsch’s Bluebeard’s Eighth Wife (1938) and Howard Hawks’ Ball of Fire (1941). The Wilder directed scripts they worked on included The Lost Weekend (1945) and Sunset Boulevard (1950). It was, in fact, dissatisfaction with the handling of a script that he and Brackett had written for Mitchell Lesien that led Wilder to the director’s chair. The incident most frequently retold involves a scene in Hold Back The Dawn (Mitchell Lesien, 1942) where Charles Boyer is supposed to talk to a cockroach crawling up the wall. The decision to remove this scene angered Wilder so much that he lobbied the producers to let him direct. His first directorial effort was the commercially successful The Major and the Minor (1942). He followed this with 25 more films.

Wilder’s second long-term writing collaboration was with Romanian-born I.A.L. Diamond, who had a degree in journalism and worked as a screenwriter for Paramount. Wilder’s collaboration with Izzy Diamond continued for 25 years resulting in films like Love in the Afternoon (1957), Some Like it Hot (1959), The Apartment (1960) and Kiss Me, Stupid (1964) amongst others. Some of the greatest films from the halcyon period of the Hollywood studio system were co-written and directed by Wilder. His work stands as an index for what was possible at that time. He experimented with film noir in Double Indemnity, melodrama in Sunset Boulevard, comic farce in Some Like it Hot, romantic comedy in Sabrina (1954) and courtroom drama in Witness for the Prosecution (1958). Yet no matter what the genre, a Wilder film looks, sounds and feels like a Wilder film. It has its own particular mood, tone and attitude, with a panorama of finely drawn, complex individuals and elaborate plots. Sometimes there is a romance, at other times a scandal, maybe even a murder, but always it is filled with Wilder’s fast and snappy dialogue.

Wilder’s work has also received much criticism over the years, including the suggestion that his reputation would have been greater had he been more of a film stylist. But Wilder was intent on developing the classical principles of transparency and invisibility:

I would like to give the impression that the best mise en scène is the one you don’t notice. You have to make the public forget that there’s a screen. You have to lead them into the screen, until they forget the image only has two dimensions. If you try to be artistic or affected you miss everything. (3)

Richard Armstrong, in his excellent book, Billy Wilder, American Film Realist, (4) emphasizes Wilder’s use of real locations, real streets and actual urban settings – a practice not common at the time. Armstrong finds a poetic edge in this quest for a realistic mise en scène. He singles out sequences like the “dumping of Dietrichson’s body at the railroad tracks” in Double Indemnity “shot ‘night-for-night’ for maximum gloom” (5) as an example of poetic realism reminiscent of the work of Zola or Renoir. Wilder’s realist aesthetic, his deep shadows, gritty hard-edged streets, railway tracks, baroque houses, dramatic staircases and barren desertscapes offered startling, moody, and evocative images. While always in the service of his story, they also describe a powerful expressive film style that we now appreciate as his own.

The other main criticism that has been directed against his films is that they are deeply cynical and bleak. Ace in the Hole (aka The Big Carnival, 1951) is the film that has most often been singled out in this way. A down-on-his-luck newspaper reporter Chuck Tatum sees his chance to get back to the big city newspapers when he stumbles across a man trapped in a desert cave-in. He unnecessarily prolongs the rescue operations, in order to build the story and his own fame, only to end up resulting in the death of the cave-in victim. The story is brutally tragic and the representation of media and society is vicious. Yet, it is also a powerfully entertaining film full of wit and sparkling dialogue with lines like “I never go to church; kneeling bags my nylons” or “I’ve met some hard-boiled eggs in my time, but you, you’re twenty minutes”. Wilder’s vision is certainly dark. However through the darkness we also discover, as Cameron Crowe says, “a clear eyed view of life in all its humour, and pain” (6) 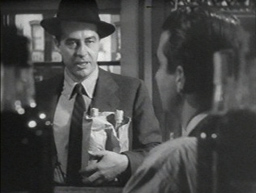 In Australia, Wilder’s films are shown on television as film classics as well as in our Cinémathèque program. Just the other night I had the chance to revisit Wilder’s Lost Weekend on cable television. Hopefully there are more Wilder retrospectives in the pipeline. Such screenings and events will provide the opportunity to introduce this significant body of work to those who have not yet had the pleasure of Wilder’s sweeping visions, edgy characters, bittersweet stories, acidic poetry, and witty phrases. I think Sikov says it best in his Wilder biography:

…not even Wilder, the master cynic, could foresee the kicker. The big joke is, with each passing decade Wilder’s acerbic tales only seem more tender. At the end of our vicious and exhausted century, Wilder’s nastiness has taken on a kind of romantic poignance. His movies are shockingly delicate…There was always decency there, even if no one could ever quite grasp it for good. There was love, however uncertain or tentative. (7)