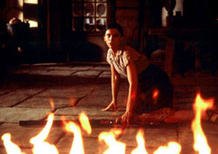 What was it that so unnerved me in the contemplation … of a mystery all insoluble? I was forced to fall back on the unsatisfactory conclusion, that while, beyond doubt, there are combinations of very simple natural objects which have the power of thus affecting us, still the analysis of this power lies among considerations beyond our depth.

– Edgar Allan Poe, The Fall of the House of Usher

The success of a thriller/horror film depends on its ability to coalesce all the elements of the mise en scène, so that their overall combination and interrelation engenders a meaning that exceeds their signification as mere objects, sounds or pictorial decorations. This does not necessarily imply an economy of meaningful ‘symbology’. Rather, it is the subtle balancing of effects and affects that makes what is essentially crafted fabrication ‘believable’ and that establishes an axis of sustained ‘suspension of disbelief’ on which the horror film revolves. The few films in which long after their duration there resonates associations that at first glance are passed over or placed in the recess of memory as the plot ceaselessly unfolds (are there not films which need to be rewound to re-hear that pearl of dialogue, to contemplate all the objects contained in the scene as is the privilege of viewing a painting or a photograph) makes the delineation of a convincing horror film a frustrating enterprise. All too often we are left with moments, a shock cut or two, an evocative score, suggestive lighting schemes, talented make-up, or effects as the sole redeeming feature of a flawed work. Even the masters of the genre such as James Whale, Jacques Tourneur, Franju, Bava, Terence Fisher, Franco, Argento, Carpenter, Cronenberg, Romero, Polanski, Hitchcock and so on have as many failures as films that successfully integrate all their elements, just as the exceptional ones (Nosferatu, Island of Lost Souls, Circus of Horrors, Peeping Tom, The Shining, etc) are just that: exceptions.

Mexican born director Guillermo del Toro has been fashioning an international, bilingual career from both sides of the border that has included the sombre and restrained vampire variation Cronos (1993) and the excesses of two US features Mimic (1997) and the recent Blade II (2002). The American films display the trademark grand guignol of high finance production: the systematic imperative that special effects alone equates with a quality horror film product, a logic which limits genre movies with the need to display spectacle at the expense of subtle indication. But with Cronos and his other Spanish language film, El Espinazo del Diablo (The Devil’s Backbone, 2001), del Toro is able to inhabit another persona (as both director and writer) and create a markedly different kind of film that is all of Mexican, European (Spanish) and knowing of the conventions and history of the horror genre. With El Espinazo del Diablo, del Toro has made his most mature, evocative work that, like other great films of its type, opens itself up to interpretive possibilities. In provocatively going beyond mere narrative and genre via a suggestive mise en scène, it imbues every detail with residual nuances that relate to other cultural objects, such as poetry, literature, painting, film, and by implication and explication, historical and contemporaneous issues concerning memory, family, society and the political.

With films such as El Espinazo del Diablo interpretations are multifarious, yet there always seems to be those that are unobtainable, elusive, and speciously, mysterious. This may be a (hardly new) definition of what a great (horror) film is capable of doing; by stimulating drives and desires with a cornucopia of visual and aural elements we are placed in a context in which the deemed taboos of a society (murder, incest, insurgency) are exposed, in doing so, asking us to question our own limitations and prejudices.

1939. The Spanish Civil War. General Franco’s right wing nationalists are on the verge of defeating the left-wing Republican forces, nominally Los Rojos – red being the colour of liberation and of blood, death and salvation. The film is replete with cuts, scars and the salves of bandaging, articulating a cycle of conflict and healing. A young boy, Carlos (Fernando Tielve), son of a fallen liberationist, is abandoned by his tutor at an orphanage located in ‘the middle of nowhere’ that secretly houses the sons of revolutionaries. The fact that Carlos’ guardian was also his tutor marks him as an intellectual and it is his natural intelligence and ability to analyse situations that differentiates him from many of the boys, particularly the brutish bully, Jaime (Íñigo Garcés), to whom he soon falls victim. Read as political analogy the boys function both as victims and perpetrators, the fathers of the present generation and the children of this generation itself who inherit the more recent past.

The orphanage alludes to the consequences of war, in which children are left fatherless/parentless. Furthermore, by being in the middle of nowhere, it represents a hermetic, isolated space that is often present in the horror film via the haunted house/castle/fortress – spaces where there is an impenetrability from inside and outside the structure, which with its fort-like architecture (high inaccessible walls, central courtyard, sealed gates) suggests in its self-containment that what will ensue will take place from within (physically, psychologically). Cryptically, an unexploded bomb dominates the courtyard and acts as a talismanic symbol of potential dangers, as well as ‘sighing’, a tonal reverberation that forms a matrix of ‘sighs’ within the film.

The orphanage’s ‘parents’ are the dedicated Professor Casares (Federico Luppi), a man of science who has prolonged his dedication to the cause, but has lost his effectiveness. He is the impotent father yearning for the unrequited love of the school’s ‘mother’, Carmen (Marisa Paredes), whose husband, a poet and revolutionary, has been killed in the ‘ideological’ war. Through the walls of his room, Casares quotes Tennyson and plays the tangos of Carlos Gardel – icons of passion and virility – while the embittered Carmen’s sighs of ecstasy are provided for by the young, returned ‘son’, Jacinto (Eduardo Noriega). This variant on the classical Oedipal scenario (son replaces father as object of mother’s affections) has its tragic outcome inferred by Jacinto’s even more potent lust for the gold ingots that Carmen hordes for la causa. Carmen’s ‘damaged’ body is evidenced by a prosthetic leg, the same affliction that ‘appears’ in Luis Buñuel’s Tristana (1970). In fact, the central relationship in Buñuel’s film is mirrored in El Espinazo del Diablo by Casares and Carmen’s relationship.

Carmen is the older Tristana, whose (physical/psychological) ‘nature’ has been transformed; she wears the pain and weight of her life with the metaphoric amputated/prosthetic leg (lost innocence/gained trauma). Like the aging socialist that is Fernando Rey’s ‘uncle’ of the Buñuel film, Luppi’s Casares is the terminally jilted lover, Rey’s mephistophelian manner balanced by Casares’s romantic ineffectualness. Luppi, who also played the tender vampire Jesus Gris in Cronos, has established a credible partnership with del Toro that potentially will leave a body of work as enduring as the coupling of Buñuel and Rey/Michel Piccoli. The aristocratic, cultured and politicised old man is a figure virtually absent from American cinema. Late Lancaster comes to mind, but only in European roles (The Leopard, 1900), while the Jimmy Stewart types resist anything but moderate political positions (The Man Who Shot Liberty Valance) and the pugnacity of Spencer Tracy, Bogart and company lack the intellectual sophistication.

Carlos is welcomed to the orphanage as the new ‘crio’, a vernacular word for ‘boy’ or ‘child’ that literally means ‘raven’ (derived from the saying, ‘cria cuervos y te sacaran los ojos’ [raise ravens and they’ll pluck out your eyes]), alluding to children’s inability to be educated or tamed. The saying is the title of Buñuel’s protégé Carlos Saura’s film Cría cuervos (Raise Ravens, 1976), set during the last days of Franco’s fascism, in which, in a similarly hermetic space (a mansion ‘sealed’ off from the surrounding city), a young child dreams of influencing the death of her abusive ‘father’, a military officer. Del Toro turns back the clock of history to place his children in a position of initial resistance not heroic defeat, perhaps commenting on society’s tendency to replace old regimes with new ones, new ones to be resisted. The figure of resistance initially appears as the ghost of a young boy murdered at the orphanage, Santi (‘Santito’ means little saint), but later in the film is transformed into the spectre of Casares after his death, where, literally worn out, he offers a final resigned sigh.

Casares finds a comic book version of The Count of Monte Cristo amongst Carlos’s belongings asking him whether he knows ‘what happens to the hero’, anticipating Carlos transforming into the film’s ‘comic book hero’, escaping from ‘incarceration’. In a subsequent scene Casares attempts to explain the basis for scientific rational thought to the young boy showing him a series of specimen jars containing deformed foetuses. For anyone who has attended a Mexican fair the attractions of ‘Los Serpientes’ with their attendant house of horrors (two headed cats, four legged chickens, etc) will know of the powerful beliefs still held in the mystical, ‘other-worldly’ nature of the freakish. Casares warns of the vagaries of superstition telling how they sell the embalming fluid of the ‘child’ with the ‘devil’s backbone’ to gullible townspeople as a curative for various conditions including impotency. Having dismissed the impressionable young boy we see Casares sampling the invigorating elixir, contradicting his stated position as it is suggested that he uses the concoction in an attempt to cure his own sexual and philosophical deficiencies; to put faith in the irrational when all hope is gone.

Santi appears to Carlos, first communicating through torturous ‘sighs’ (the other boys call him ‘the one who sighs’) and, eventually, intoning dramatically that ‘many of you will die’. This prediction is initiated by a thwarted attempt to escape the orphanage during which Jacinto sabotages the plan. As in the mythical Westerns gold is associated with death and Carmen dies ‘wearing’ the gold ingots hidden in a recess in her false leg after complaining of the extra ‘weight’ she is carrying. Casares, who prophetically claims that he will ‘never leave’, expires and the boys, held captive by Jacinto, resolve their differences and bandy together in a recasting of Golding’s Lord of the Flies, where the group form a collective allegiance rather than enact primitive impulses or replicate colonial political hierarchies. Having discovered the gold Jacinto ties it around his waist, the gesture becoming a literal ‘weight belt’ as he is lured into the well under the orphanage, where his victim, Santi awaits.

In investigating the ‘weight’ of history (the Spanish civil war), of power (represented by the gold), of religion (in an early scene in the film the boys move a large crucifix, one commenting on how ‘heavy he is for a dead man’) and of family (impotent father/damaged mother/faithful and unfaithful sons), El Espinazo del Diablo weaves a web of ideas and connections. In the ‘sighs’ of remiss, passion, the cry of a troubled soul, the death gurgle of a drowning Jacinto, and the reverberations of the unexploded bomb notions of inherited memory, the collective conscience and the ramifications of political allegiance resonate. The fantasmas that haunt us from the past, located in culture and significant events, are evoked in El Espinazo del Diablo‘s prismatic associations which are beautifully conceived of in the film’s epilogue, delivered by the returned ghost of Casares, as ‘an insect caught in amber’.