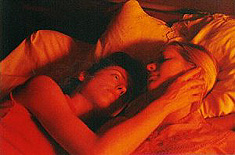 If slow-burning formal restraint can be considered a sign of integrity in the cinema, the winter solstice that has iced most of this year’s homegrown releases will have the blowtorch taken to it next month at the Australian Centre for the Moving Image. “Subtle Strokes”, an appropriately titled program of works by Melbourne-based independent filmmakers Bill Mousoulis and Mark La Rosa, makes for an illuminating quadruple bill: for anyone currently disheartened by narrative cinema, the enigmatic trajectory of each work has the potential to revive dashed hopes with the force of a quadruple bypass.

Both Desire (1999) and Lovesick (2002) – the most recent feature-length films Mousoulis has written, directed, edited and produced – offer a particular type of interiorised spectacle. In Desire, the inner life of most characters is often reflected in the outer, which is to say exteriorised albeit as an indoor event: a female face locked in a thousand-yard stare is seen trapped behind her window to the world, a poster image of morose middle-class suffering. The film’s first title card, “The Lives of our Days”, sets the narrative adrift. The characters, akin to displaced memories, come and go in dream-like reality.

“Let’s just do it”, asserts one woman to another within arms’ reach. “London…” is her partner’s disappointing reply. To judge by the non-committal response to this loaded proposal, only one half of this relationship is intent on going to England. Despite the transient nature of the movie and its characters, Desire takes its cues from a kind of ritual inertia. Later on a young man and woman sit immobilised on a park bench like primitive actors from the silent era posing for the camera for the very first time, the black and white footage a prima facie tribute to the old Pathé cinematograph. Meanwhile, the larger world of the film is predicated on needs that are equally primitive.

“Before you love others you have to love yourself”, reads another title card after an attractive glazed-eyed woman pleasures herself in an empty bedroom. Mousoulis’s view of men is similarly detached, even if one softly-spoken individual experimenting with a member of the same sex for the first time enjoys the most vigorous session of fucking. There’s a lot to be said for diving in. Especially for one sensitive creature who spends much of her time on a pier contemplating the sunset. Soon her diary is thrown into Port Phillip Bay. But will she follow? If Desire has a kindred spirit it may well be Virginia Woolf, although Mousoulis is channelling more than just her stunt suicide. The fragmented approach to character epitomised in The Waves ripples through much of Desire; also Woolfian are the refined elocutions of the multi-character voice-over. Mousoulis, however, prioritises the image over verbal exchanges, and his director of photography, Con Filippidis, serves him wonderfully. The film has a lush look to match its extremely photogenic troupe, all of whom, dare it be said, comprise the ultimate band apart.

An ambitious mosaic in hushed tones played out across an ensemble of conventional dressers – most of them lesbians – Desire, as its title implies, exists in a realm difficult to dramatise and even harder to make light of. Yet Mousoulis isn’t a heavy filmmaker. Despite the odd comic pop intrusion (like lyrics from Madonna’s “Like a Prayer” cited on another title) the film delicately switches register as it circumnavigates its multiple locations. The camera, nearly always impartial in its view of the scene, captures opaque details, fixed almost exclusively to horizontal landscapes, whether they be outstretched vistas or naked couples.

With no singular focal point, Mousoulis intersects his frozen moments with the cumulative effect of sparsely realised portraits in suburban limbo. The disenchanted atmosphere almost belongs to Joseph Losey, although the film’s dramatic stasis and oblique rhythm bear comparison to Robert Bresson. That the film goes out on a telling note reminiscent of the way Bresson withholds the long-waited-for epiphany in The Devil Probably (1977) seems less ruthless than it is jocular. “What a vision”, a character gasps just as Mousoulis cuts to the credits. It may not be revolutionary, but we might take solace in the fact that here is an Australian feature not afraid to have one.

Lovesick, Mousoulis’ most recent feature-length film, takes place for the most part inside the urban lovenest of an Melbourne couple. The film demands recognition for an inner logic predicated on the undercutting of its own narrative expectations. Indeed what counts as an event here might well be when a character pulls on a pair of shoes.

A pre-credit sequence shows an unidentified man and woman rendezvous somewhere in a city after a day’s white collar work (assuming their matching formal attire is some sort of job indication). A long embrace, shot in profile to maximise their romantic symbiosis, follows. Suits and briefcases are no sooner discarded in the garbage than they’re naked on a bed, firmly engaged.

These days of being wild could be said to last for some period if the subsequent sex scenes from what might be a marathon session didn’t obliterate most conventions for establishing a discernible time frame. “What do you wanna do?” inquires the woman, later referred to as Louise (Holly Marshall). Depending on the stamina of boyfriend Steve (Clay Ravin), the answer, like much of Lovesick‘s action, isn’t explicitly forthcoming. More fucking, however, is. 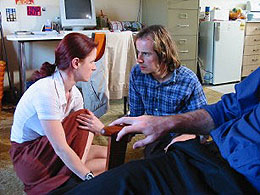 So far, the relationship appears founded on the purely physical. Within the enclosed environment, however, their intimacy remains tangible. Until Louise scrawls the words “The Outside World Does Not Exist” on a piece of paper and hangs it near the entrance to their protected sanctum, Mousoulis has carefully maintained the illusion of a cocoon. As with Last Tango in Paris (Bernardo Bertolucci, 1973) the shared space remains significant. Often viewed in profile, Marshall, complete with burgundy hair, recalls Julianne Moore in Todd Haynes’ Safe (1995). She too suffers from an obscure affliction prohibiting most forms of casual interaction. She’s also reading Sartre, while Steve strums an acoustic guitar like he might be in a Violent Femmes cover band (if Mousoulis establishes anything with such limited details, it’s that these are people you might best avoid at a party). At night on television the twin towers of the World Trade Centre smoulder, poised to collapse. Katie Couric’s disembodied voice surveys the onscreen action. Then our lovers, seemingly affected by the footage on NBC, become increasingly amorous. One phallus burns while another is about to! Even as Lovesick interpolates the dramatic footage of the towers, then later on their smoking ruins, perhaps what’s most confronting is the way the lovers use this imagery as a pretext for the pleasure principle. Better yet, Mousoulis quite deftly never allows their apathy to become ours.

“We should go on the dole tomorrow”, Steve suggests with appropriate languor. Finally out of the house, with some brief time apart, both run into former acquaintances – of the opposite sex. Anticipating what might be said proves more interesting than what is. Mousoulis rarely does subtext, most especially in his dialogue. Even so, Matthew (Stuart Black), a pompous writer keen to dispense creative advice to Louise, provides the first archetype the film will kill off; Tamsyn (Marie Ng), a musician with whom Steve shares his allotted awkward conversation, its second.

As in a Philippe Garrel film, the characters’ taste in music is far more expressive, not to mention cooler, than any sense of self they project. Mousoulis cites some key tracks from Bob Dylan’s last studio album, Love and Theft, although Lovesick possibly takes its title from Dylan’s previous classic Time Out of Mind – an equally apt description of the film’s measured pacing. Mousoulis isn’t inclined to up the torque level when the missing bodies demand that a pair of cops (Josie Scott and John King) enter the picture. But just as the male detective can’t seem to light any of his cigarettes, this plot device isn’t meant to catch fire; rather it appears deliberately designed to confound.

For the lovers, mutually agreed separation fails to cut what remain deep-seated ties. Despite anchoring the parallel action of their time alone in an uncertain state of separate-rooms-separate beds-nothing-said-alienation, body language continues to be echoed, and moods are ultimately reflected with the narrow-gauge of still life. Bookended with a digitised time and date, Lovesick in its overly schematic way signals the sublime passing of a season. Antithetical to genre specifications, the film’s serendipity ultimately proves hard to shrug off, even though Mousoulis gives the impression he’d be equally at home filming the evolution of a quince tree.

Mark La Rosa, a former member of the Melbourne Super-8 Group like Mousoulis, works comfortably from means just as economical. A pair of his medium length shorts, Black Trade (1999) and Paper Chains (co-directed with Richard Tuohy in 1992) also share an interest in creating a world governed by its own unique laws.

Deadpan ensemble comedies both, the political missive Black Trade and the drolly realised Paper Chains are built upon the splintering of a group dynamic. The first from a political sting operation premised on an offensively self-important corporate demagogue’s imminent demise; the second via a weekend trip away that never quite eventuates.

The premise for each film is unclear. So are the motivations of any one individual – the fast-talking smooth criminals at loggerheads in Black Trade especially. In contrast, Paper Chains, a series of droll vignettes intimately scaled as detached slacker two-handers, isn’t so much equipped with an hidden agenda as it is pregnant with comic pauses. This is a film observant of the bits of business involved when friends drop by for a visit. The social clime isn’t particularly interesting but in scenes like a bravura conversation between two strangers at a party, the most innocent of exchanges can mobilise, for the time being, the most complacent of characters when burdened with life-changing news. Assuming the worst of course. And La Rosa likes encouraging you to do so.

With a gravity beyond the simple world presented, Paper Chains devotes much of its 33-minute running time to meandering melancholia. Paradoxically, this pokerfaced masterpiece is at once restless and docile. Each character seems to have had their frontal lobes zapped. The central female, a politely accommodating presence, is dressed ripe for a Norman Rockwell painting; the male, conversely, is a ponytailed slave to his computer who wears a “Mum what’s happening to me?” expression for much of the time. As well might he ask. This is a film that avoids judging its characters. But that’s not to say Paper Chains isn’t also an audacious exercise in subtle schadenfreude. 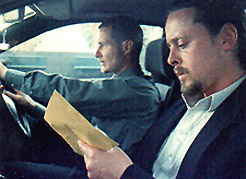 As Black Trade most definitely also is, no matter how much hot air gets expelled by the film’s obnoxious corporate gangster and eventual fall-guy. Here, too is an example of exposition devoid of immediate context. But like Godard by way of Hal Hartley, La Rosa provides a critique for his own movie even as it charges forward unconstrained by formulaic demands. Plunging into the middle of a conspiratorial sting operation, complete with strange callers and golf course meetings, Black Trade is, as might be expected, short on nominal heroes. Instead the principal characters are a rag-tag collection of sleepwalking criminals minus much fruitful activity. Of interest perhaps to those wanting to see where Radha Mitchell first begun honing her ice queen routine, Black Trade matches her clinical approach. A drug deal conducted in a car is cut around systematically, each time from a new perspective. It’s another enterprising sequence which pertains to what we see and don’t see for the remainder of the film. That La Rosa punctuates this terse little self-involved operation with scenes of a celebratory drink gracefully precludes any sort of identifiable toast at the end. It’s a rare event these days when an Australian-produced short works without a punchline.

“Subtle Strokes” screens at the Australian Centre for the Moving Image August 24 and 27.