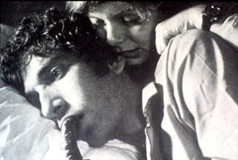 In 1975 David Cronenberg assaulted audiences with Shivers, his third feature, introducing many of the interests and themes that would preoccupy his subsequent films. These themes include an exploration of the relationship between humans and technology, a fascination with the fragility and mutability of the human body, and the radical possibilities of transcending evolution by using science to drastically alter our bodies and minds.

Shivers is set inside the clear and sterile Starliner Towers, a self-sufficient apartment high-rise complex with the infrastructure of a small community. A parasite that was originally developed to replace diseased organs goes rogue and transforms its human hosts into sexually violent sociopaths. The only way the parasite can spread itself is for the host to sexually attack other people so that it can spread itself into the new host via any orifice available. The self-contained world of the Starliner Towers becomes the perfect breeding ground for the parasites, as gradually everybody either living or working there is transformed into hosts during a frenzy of sexual violence.

In terms of narrative structure Shivers appears to be a traditional horror film, but it also breaks many restraints of the genre. Unlike the monster/killer of many other horror films, the parasites in Shivers are purely motivated by their will to live and procreate. They are not constrained by society, politics or emotions, and hence attack indiscriminately. Another dramatic generic difference in Shivers is that few people die. Instead they are transformed into sexual predators who appear to be flourishing in their new life of violent and hedonistic desire. Shivers breaks many taboos since nobody is spared, regardless of gender, race, status, or age; and there are no repercussions to restore social order.

Shivers‘ small budget meant crude and cheap special effects were utilised to create the violence and horror. Like The Texas Chainsaw Massacre (Tobe Hooper, 1974) and Night Of The Living Dead (George A. Romero, 1968) this had the effect of making a more visually disturbing film. The violence is raw, brutal and graphic; the parasites look overtly organic; and the blood flows and spurts as if there was an endless supply. The lack of elaborate special effects gives the film a disgusting realism. While films such as The Evil Dead (Sam Raimi, 1983) utilise every known camera angle and camera movement to generate a giddy subjective sense of claustrophobia and panic, Shivers does the opposite. Predominantly shot from low wide angles, the camera barely moves and the editing and framing are simple and unobtrusive. This creates an almost documentary look to the film, further heightening its sense of realism. As the blood and parasite flesh begins to violate the ordered frame of Cronenberg’s camera, the audience cannot help but feel they are witnessing actual events.

After seeing Shivers Martin Scorsese commented “[The ending] is genuinely shocking, subversive, surrealistic and probably something we all deserve.” (1) Scorsese seems to be suggesting that Shivers can be read as an attack on the middle class. The Starliner Towers certainly can be read to symbolise close-minded communities, or nations, where only the elite and wealthy are welcome to share in the comforts of consumerism and isolationism. By indulgently denying the existence of the outside world, such a community is doomed to generate its own set of problems and eventually self-destruct. Very similar ideas are found in J. G. Ballard’s novel High Rise, which coincidentally was also published in 1975. Ballard (whose novel Crash would be turned into a film by Cronenberg in 1996) describes another self-contained apartment building community where the residents from the lower, middle and upper floors have regressed into tribal groups to fight each other for control of the building.

But perhaps Shivers demands a totally alternative reading that does not rely on the Marxist or Freudian theories that are so often used for analysing horror films. It is possible that Cronenberg is not concerned with the human issues of class and politics at all. When Cronenberg says, “[For diseases] it’s very positive when they take over your body and destroy you. It’s a triumph,” he may as well be referring to the parasites in Shivers. (2) Shivers could well be the first parasitic feel-good film. Cronenberg could even be suggesting that the success of the parasites is also a success for human evolution:

I don’t think natural selection, as Darwin understood it, is really at work any more as far as human evolution is concerned. I think something more along the lines of nuclear disaster is perhaps a natural part of our evolution. It may be a strange philosophy, I’m not sure. But my instincts seem to suggest that we were meant to tamper with everything – and have done – and that this will reflect back on us and change us. (3)

In Shivers, Cronenberg typically includes an elaborate scientific explanation for the existence of the parasites, making it very clear that they were created by medical science. Cronenberg’s ideas of bypassing evolution through science and technology are also expressed in his later works, especially Rabid (1976), Videodrome (1982) and eXistenZ (1999).

Although the parasites and the violence they cause is repellent, they do create a state of reckless abandonment for their hosts, who once infected are singularly focused on indulging in all kinds of sexual activity. Once the traumas of their initial attack is over, the residents of Starliner Towers are liberated from their jobs and repressed lifestyles, freeing them for their quest to infect others. Perhaps the most disturbing element of Shivers is how seductive such a scenario is. Once infected, the residents appear a lot happier and unrestrained than they were at the start of the film.

Is it possible then that the final shot of the residents driving out of Starliner Towers is not meant to be interpreted as frightening or upsetting at all, but is instead a thrilling promise of what is in store for the rest of us now that science has finally kick-started evolution?