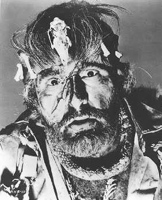 Sandwiched between his notorious saga of rape, revenge, and realist horror, Last House on the Left (1972), and his franchise-initiating fairytale of supernatural serial killing, A Nightmare on Elm Street (1984), Wes Craven’s The Hills Have Eyes tends to get lost in critical discussion of America’s reigning horror auteur. This may be truer today than ever, considering Craven’s meteoric rise to mainstream respectability after the staggering box office success of his Scream trilogy (1996, 1997, 2000), for which he was ‘rewarded’ with the opportunity to direct a Miramax melodrama (Music of the Heart, 1999). A relentless chronicle of violence against and within the bourgeois family unit, Hills usually occupies the role of Craven’s ‘cult classic’ – celebrated by the director’s hardcore fans, appreciated for its low-budget aesthetic, generating semi-ironic readings which praise its archetypal allusions as well as its exploitation movie themes. (Last House on the Left would lay similar claim were it not for its unremitting bleakness and cynicism, which serves to all but negate that spectatorial pleasure usually deemed necessary for cult status.) Without wishing to suggest that a less than serious interpretation of this film is in any sense a misreading, or that the rest of Craven’s cinematic output isn’t strewn with significant yet overlooked/underexamined achievements – e.g., Summer of Fear (aka Stranger in Our House, 1978), The Serpent and the Rainbow (1988) and The People Under the Stairs (1991) – the claim here is that Hills warrants serious consideration as one of the richest and most perfectly realized films of Craven’s career to date, a career which spans 40 years and counting.

The plot moves inexorably towards establishing a structural correspondence between two superficially opposed families who face off in a battle to the death on the desolate site of a U.S. Air Force bomb-testing range. In one corner are the suburban middle-class Carters, headed for Los Angeles by car but making an unwise detour through the Yucca desert to locate a silver mine willed to Ethel and her husband ‘Big Bob’ by a deceased aunt for the couple’s silver wedding anniversary. In the other is a clan of primitive scavengers who live in the surrounding hills and are ruled with an iron fist by a mutated monster-patriarch named Jupiter. This group of cannibalistic guerillas, standing in for any number of oppressed, embattled and downtrodden minority/social/ethnic groups – from African and Native Americans to backwoods hillbillies to (in Tony Williams’ astute analysis) the Viet Cong during the failed 1970s U.S. invasion (1) – manages to eke out a squalid existence by using discarded army surplus tools and weapons for the purpose of committing petty thievery.

When their station wagon crashes in Jupiter’s neck of the desert, the members of the Carter family – including teen siblings Brenda and Bobby, eldest daughter Lynn, Lynn’s husband Doug and the couple’s infant daughter Katy – reveal the extent of their ideologically-inherited arrogance, repression and capacity for denial, all of which makes them prime targets for victimisation by their ruthless, unscrupulous enemies. Big Bob is crucified and finally immolated by his counterpart Papa Jupiter in a highly symbolic act signifying utter repudiation of Judeo-Christian values – values which Big Bob himself hypocritically denounces in an earlier racist diatribe. Two of Jupiter’s sons later raid the Carter’s RV trailer, where they rape Brenda and murder Lynn and Ethel. Stripped of all pretensions, desperate for survival, the remaining members of the Carter clan finally find within themselves the courage, wrath and craftiness to kill off their enemies. The film closes with a powerful red-filtered freeze-frame of Doug in full fury, set to stab Jupiter’s son Mars in the chest though Mars is surely already dead. As D.N. Rodowick succinctly puts it, by the end “we are…to understand [these families] as being two sides of the same coin; or better yet, the violent ‘monster’ family could be characterized as the latent image underlying the depiction of the ‘Whitebreads.’”(2)

Craven’s creativity is especially evident at the levels of style and genre; in both respects, the director goes all out in what looks like a wholly self-conscious effort to mix, match, juxtapose and hybridise existing codes and conventions. Williams considers Hills a fusion “between several Hollywood genres – horror, the western, and the road movie,”(3) and John Kenneth Muir calls it “an intelligent re-working of the siege film, a genre in which a group of people are isolated in a remote location and attacked from all corners by their enemies.”(4) Stylistically, Craven makes innovative use of shock tactics and startle effects (similar to those found in Dario Argento’s Suspiria [1977] and anticipating those present in John Carpenter’s Halloween [1978]) to keep the anxiety level high throughout. And the varied employment of hand-held camerawork, masked point-of-view shots, night photography and rapid-fire editing (this last technique “particularly important in selling some of the more difficult-to-dramatize scenes”(5)) is all endowed with a strong sense of purpose, serving to sustain pace and tension in the narrative.

It is likely that most viewers of Hills would second Rodowick’s assessment that, “in the final analysis, I’m not sure whether I would consider The Hills Have Eyes to be a progressive text or not.”(6) This can be explained at least in part with reference to the contradiction lying at the heart of Craven’s film: the bourgeois Carter family’s phony values and repressed rage may eventually be exposed, but this does not make any less loathsome or unsympathetic the depiction of Jupiter’s marauding cannibal clan. As in so much of Craven’s work, at the end of the day everyone is guilty, everyone is to blame.