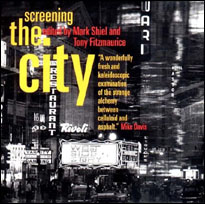 Theorising the city and cinema is an irresistible project for academics in many disciplines. In the 1997 collection of essays The Cinematic City, edited by David B. Clarke, the 11 contributors included a professor of planning history and three geographers. Clarke cited cultural critic Walter Benjamin and philosopher Jean Baudrillard in his introduction, and indicated the book originated from Screenscapes, a conference he organised at the Leeds International Film Festival in 1993. A more recent anthology on the same topic, Screening the City is edited by two lecturers in film studies, Tony Fitzmaurice and Mark Shiel, who were also responsible for the earlier Cinema and the City: Film and Urban Societies in a Global Context (2001). Nearly all the essays in both the latter books originated as papers presented in a 1999 conference which the duo organised at University College, Dublin.

In the opening essays of their 2001 collection, the editors announced a macro-ideological focus: Shiel insisted “Films are globalisation, not its after-effects” (1) and Fitzmaurice admitted that “Resistance to the hegemonic monoculture promoted by mainstream and especially Hollywood cinema…is a task of near-Sisyphean proportions” (2). There the geographically diverse contributors tended to ground their analyses in specific cities (Los Angeles, Manila, Paris). However, the mostly UK or US-based contributors to Screening the City focus more on individual films, or pairings such as Man with a Movie Camera and Berlin, The Symphony of a Great City (Walter Ruttmann, 1927) or Crash (David Cronenberg, 1996) and The End of Violence (Wim Wenders, 1996).

While in their introduction co-editors Fitzmaurice and Shiel laud an “increasing interpollination of film studies” (p. 1) with other fields, this interdisciplinary agenda has yet to flower. Grafts between film theory and film text are more evident in Screening the City than fruitful hybrids between cineastes and geographers, architects, globalists, or urban anthropologists. A coterie of theorists circulates throughout the essays: Walter Benjamin, Mikhail Bakhtin, Henri Lefebvre, Gilles Deleuze and Felix Guattari. Writers Mike Davis and Marshall Berman are often cited. Affected by this heady aura, prose in Screening the City teems with expressions such as “Heideggarian jargon”, (p. 272) “Lacanian uncanny”, (p. 15) and “commodification of locatedness” (p. 216). “Self-conscious citationality” (p. 196) occurs just once, but there’s no counting the times I encountered the tautology “self-reflexive”. (This redundancy is a gilded lily if there ever was one: a linguist I polled called “self-reflexive” a case of “ceremonial accretion” while another classified it as an “Amos n’ Andy word”.)

Most of this theory, or wannabe theory, is decorative and disposable. In the essay “After the ’60s: Changing Paradigms in the Representation of Urban Space”, Allan Siegel raises the issue of transparency: “How can we prevent ourselves from being suffocated within an inwardly spiraling vocabulary that threatens to nullify the possibilities of discourse?” (p. 141) Transcending academic cant is a long-standing concern for Siegel, the only contributor who identifies himself as a filmmaker. In 1968 he helped start the leftist collective known as Newsreel that shot and distributed 16mm films about campus protests, Vietnam War marches, the Black Panthers and other issues perceived to be misreported by American mainstream news. Other contributors to Screening the City do not share this urgent ’60s desire for clarity, most struggling in the mire of theory-talk that Siegel himself falls into a few pages later with his obscurantist description of cinema as “the central elocutionist of iconographies” (p. 145).

Some writers at least spell out their theoretical sources instead of assuming familiarity. Shiel, for instance, offers a clear primer on “the three stages of capitalism” (p. 161) in his essay “A Nostalgia for Modernity: New York, Los Angeles, and American Cinema in the 1970s”. However, his attempt to interpret Network (Sidney Lumet, 1976) and Annie Hall (Woody Allen, 1978) using this historical framework sheds little light on the films. Similarly Paula J. Massood helpfully defines Bakhtin’s “chronotope”, while Paul Gormley defines Deleuze’s ideas of “action-image” (p. 191) and “any-space-whatever” (p. 193). But in separate essays on “New Black Realism” neither writer persuaded me that their theoretical tools assisted their analyses of Menace II Society (Albert and Allen Hughes, 1993).

Discussing Jan Svankmajer’s 20-second 1989 film Flora, David Sorfa translates Freud’s unheimlich as “uncanny” or “unhomely”, an interstitial Surrealist condition that is not “exactly homelessness”, more like “homesickness without the hope of ever finding oneself at home” (p. 110). The notion is put to better use by Carsten Strathausen in the book’s impressive opening essay “Uncanny Spaces: The City in Ruttman and Vertov”, which shows how two city symphonies from the late ’20s anticipate a cyborgian ethos. Strathausen extracts from Berlin, The Symphony of a Great City and Man with a Movie Camera two philosophies for eyeing the metropolis. Rather than import and impose trendy ideas, he works from the images on the screen.

Contributors to Screening the City like to claim that allegory is immanent in the mise en scène of certain films and urban mileaux. I’m drawn to the writers who simply offer narratives of films and their making. “Why did Berlin vanish from Berlin Alexanderplatz?” (p. 60) asks Peter Jelavich in “The City Vanishes: Piel Jutzi’s Berlin Alexanderplatz?” This historical whodunit ponders the gap between Alfred Doblin’s daringly cinematic novel of 1929, replete with local colour and moral critique, and its enervated 1931 film adaptation. Jelavich scrutinises the novel, the screenplay, the briefly released print and the reviews, along with newspaper accounts of Nazi rallies in December 1930 attacking Carl Laemmle’s production of All Quiet on the Western Front; a nuanced tale of economic, artistic and political forces comes into view, explaining why the film only registered Berlin in absentia.

“There is no skyline of Warsaw in Dekalog”, notes Jessie Labov in “Kieslowski’s Dekalog, Everyday Life, and the Art of Solidarity”, which takes a similar tack to decode Krzysztof Kieslowski’s framing of Warsaw’s housing blocks in his ten-part series for Polish television (p. 128). The above statement is given context by an account of Poland’s emerging solidarity movement and Kieslowski’s experiences as a documentary filmmaker who reacted to state interference by shifting to fiction. Labov quotes from Henri Lefebvre’s Critique of Everyday Life but the essay would function just as well without the lubricant of sociological philosophy. Another close reading of a filmmaker’s work in context is found in Matthew Gandy’s “Allergy and Allegory in Todd Haynes’ Safe”. In this observant essay, Gandy pursues toxic chemical sensitivity and New Age sensibility as a Los Angeles allegory in Haynes’ “dystopian diorama of environmental estrangement” (p. 239).

Since most of the authors in Screening the City teach film studies, I guess most of its readers will be film teachers as well. What parts of this uneven book would I assign students taking Cinema and the City? At the risk of sounding like an out-of-towner, I would nominate the essays with the least so-called theory, those by Strathausen, Jelavich, Labov and Gandy, which engage ideologies that are already part of the mise en scène in the films they interpret. The cities of Berlin, Warsaw and Los Angeles, as refracted in the cinema of Ruttman, Kieslowski and Haynes, are dense enough texts without the addition of throwaway theory.