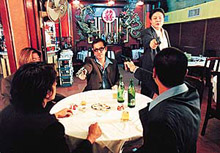 In the eyes of the world, the Hong Kong gangster picture is quintessentially Hong Kong: tough, fast-moving, full of action, and much more – an attitude on action. The films of John Woo are often cited as some of the finest examples in the genre. Woo credits Scorsese as a prime influence, but there are other equally important influences and derivations: the French gangster classics of Jean-Pierre Melville; Japanese Yakuza gangster classics, and most of all, Hong Kong’s wuxia pictures, from which is derived the concept of yi, or the code of brotherhood, honour and loyalty stemming from the tradition of chivalry and knight-errantry. Woo is also distinguished by his own dance-like style of gunfight-choreography – and here again, the influence of wuxia pictures is evident. Some of Woo’s pictures are actually choreographed by martial arts directors such as Ching Siu-tung. Woo himself also began early in his career as a director of martial arts kung fu and wuxia pictures.

Woo’s action style now represents a generic Hong Kong action style – which Hollywood has absorbed since his transition there. Mission Impossible: 2 (John Woo, 2000), for instance, is a parody of Hong Kong action movies. In fact, it could be seen as a rehash of Woo’s Once a Thief (1991). The action style engendered by Woo has been repeated and adapted by other directors working in the same genre, notably Tsui Hark (cf. Time and Tide [2000]), Ringo Lam, and now, Johnnie To – their visual style characterized by movement, speed, and stylisation. Furthermore, there’s a signature flourish that conjoins these directors as soul brothers – the shot of characters levelling guns at each other, like swordsmen facing off with swords drawn, a visual motif that has since been copied by Tarantino and other Hollywood directors.

Though Johnnie To belongs to the same school as Woo, Tsui, and Lam, his film The Mission (1999) is something of a departure from their action style. In To’s film, the action style of Hong Kong cinema is shown to have reached a mature state of repose (and I’ll gradually show what I mean by that) as the industry underwent a period of financial crisis from 1997 onwards. The difference doesn’t lie in the narrative detail or in the plot construction but in To’s treatment of action. There are stylistic differences which are self-evident: for example, To is less prone to the use of symbols than either John Woo or Tsui Hark (Woo, in particular, is well known for his Catholic symbols: like the doves, priests and chapels in The Killer; and Tsui too repeats some of these symbols: pigeons, Messiah portraits, and reworked quotations of the Creation Myth from Genesis in Time and Tide). But like his colleagues, To does refer to the central concept of yi – the code of brotherhood among underworld figures that I have cited as an element in wuxia pictures – which acts as an organic feature of gangland dramas. (1)

In The Mission, the narrative centres on a disparate group of underworld killers hired to protect a Triad godfather, the target of an assassination conspiracy. The natural leader of the group is Curtis (Anthony Wong) who works as a hairdresser when he is not employed as a hired killer. The other members are Roy (Francis Ng), owner of a bar, and his junior “brother” Shin (Jackie Lui) – in underworld parlance, gang members refer to each other as brothers, and juniors refer to seniors as “big brothers”, underscoring yet again the code of brotherhood under which they operate – and two other guys, one a pimp (Mike, played by Roy Cheung) and the other a loner (James, the fat man, played by Lam Suet). Alliances within this small group are drawn out early on and evident in the way they meet: for example, it is clear that James, the fat man, is allied with Curtis, while Shin is allied with Roy, and Mike is the man in the middle. Thus, even though they belong to the same brotherhood, they are far from being a unified team. The purpose of the movie is to show how they become a coherent group, operating on unspoken principles of coordination and solidarity.

At first, there is a degree of professional friction between Curtis and Roy, two tough-minded individuals who are brought together for the first time. Though obviously very proficient at what they do, they are also used to their own way of doing things. Roy is initially distracted by problems in his turf (a rival is trying to muscle in during his absence) and Curtis, known as “The Ice”, is concerned that this could compromise the job. Through the interplay of this relationship, To explores the professional-ethical code of conduct that binds the “brothers” of the underworld. (2) The code enjoins the group into a system of obligation and when one lets the other down, he must do a deed to recompense for the mistake, as shown by Curtis killing the character known as Rat, who has been harassing Roy’s nightclub.

The killing of Rat is to recompense for Curtis’s act of earlier abandoning Roy during the first assassination attempt under their watch (even though Curtis might have been tactically correct in doing so). Roy is left in the lurch when the rest of the group drives away after foiling the attempt. Roy of course is furious, and when he gets back to the house, he immediately confronts Curtis and beats him up. Curtis does nothing to defend himself, realizing that he has in fact “betrayed” one ethic or other of the code. With this friction between Curtis and Roy resolved, the group then becomes a perfectly coordinated team, functioning with the kind of cool-headedness and skill that Curtis had intended from the beginning, as illustrated in the “shopping mall” scene, and in the next action sequence set in a deserted warehouse where the group follows the enemy back to the nest and kills all but one of the assassins in a precisely coordinated plan of attack, deliberately letting the assassin run out of bullets and thus capturing him alive. In between, the team members indulge in acts of camaraderie to underline their tacit unity and solidarity – handing Curtis a spiked cigarette to smoke, for example, or playing soccer with a paper ball as they wait for the boss.

Thus, The Mission evolves into a character-study of how gangland brothers (who are the modern variants of chivalric knights-errant) relate to each other and pay off obligations or redeem themselves when they have wronged a brother or a big boss. We see how the code operates, not only between the bodyguards but also between the godfather and his protectors. When the godfather is nearly killed in the first attempt (his life saved by a bullet-proof vest), the bodyguards obviously feel a sense of letdown – this is in line with their sense of professional ethics. The next morning, the godfather offers them coffee, tea or ovaltine (the bodyguards are naturally embarrassed) and he tells them that they shouldn’t feel bad and that it’s not their fault if he were killed: as the ultimate “big brother” he must display a sense of fairness and magnanimity. The code of course is taken to its extreme as the movie reaches its finale: its turned around and begins to work against the group, and Curtis, being the leader, must try to resolve the problem to the satisfaction of not only the group but the gang that hired them. According to To, he had not told the actors what the ending would be, and this allowed “the actors to throw themselves into the scene and brought out the details” (3), and this no doubt contributed to the success of the final twist in the script, which retains an element of surprise right down to the last minute.

To’s approach to genre is innovative, allowing the script elements to develop within the pattern of the genre, but seeking variations within this pattern. This approach allows To to accommodate a certain experimental style in an otherwise commercial form. In doing so, he has almost single-handedly invigorated the industry throughout the 1997 financial crisis that has lasted to the present. I refer here of course to the films that To or his protégés such as Wai Ka-fai and Patrick Yau have directed for the company he set up known as Milkyway: films such as Too Many Ways to Be Number One (1997), The Odd One Dies (1997), The Longest Nite (1997), Expect the Unexpected (1998), A Hero Never Dies (1998), Running Out of Time (1999), the last two directed by To himself, as was of course The Mission.

This astonishing series of films have not only rejuvenated the industry mired in crisis, they have also revivified To’s own career by allowing him do more revisionist takes on genre movies rather than making routine commercial movies to prime-start the industry. To has had a remarkable run, but lately he has faltered. His most recent, the self-conscious Fulltime Killer (2001), indicates that To might have reached the point of burn out. (4) His basic innovation in The Mission is the adoption of a cool, detached style for action sequences, as exemplified by the superb “shopping mall” scene where the assassins strike and the bodyguards defend their boss with ultimate cool. The scene is marked by stillness which To says was influenced by Kurosawa, citing the example of Seven Samurai (Kurosawa’s classic jidai geki picture from 1954). (5) It’s a form of movement within stillness, where the characters convey immense energy just by standing still; not to mention the suspense that springs from the contrast of stillness and action.

It sounds like a contradiction in terms: how can you have stillness in a contemporary action movie that is characterized by action? To carries off the scene with an authority of a Zen master unperturbed by contradictions. Though it works for its own sake, the sequence must be understood in terms of the code – the brotherhood achieving a heightened state of professionalism through the perfect coordination of body and mind. The sequence effectively proves the kind of aesthetic that is achievable in a popular form such as the gangster thriller, and in a popular film industry like Hong Kong cinema.