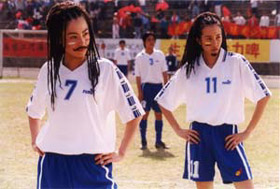 In its second year, the Sydney Asia Pacific Film Festival (SAPFF) once again offered a diverse range of mainstream and art-house films from across Asia. Together with industry development seminars and a new short film festival for Asian-Australian filmmakers, the program was a treasure trove of miniature masterpieces, supernatural comedies, gritty street tales, historical epics and powerful documentaries.

The opening film was the Hong Kong box office smash hit Shaolin Soccer (2001) directed by and starring comic legend Stephen Chow. It is the story of Fung, a forgotten former soccer star, who mentors Sing (Stephen Chow), a Shaolin monk apprentice seeking a modern application for the Shaolin fighting arts. They join forces to defeat Fung’s mortal enemy – the manager of the Devil Team. Fantastic stuff! It weaves a Seven Samurai narrative with DragonballZ special effects through the fabric of soccer – what more can you ask for? No doubt it was met with a warm response from the packed theatres.

Another highlight among the features was Chicken Rice War (Cheah Chee Kong, 2000), a love story set in a Singaporean hawker stall. The twenty-year feud between the Chans and the Wongs is resolved, not by Romeo and Juliet but Fenton and Audrey. Director Cheah Chee Kong was on-hand for Q&A sessions after the screenings and spoke about the huge success the film attracted in Singapore. Japanese film Space Travellers (Katsuyuki Motohiro, 2000) was also popular with its roller-coaster mixture of genres. Set in a future that looks little different from modern-day Tokyo with less people, three orphaned friends rob a bank with plans to escape to an imagined tropical oasis. They join forces with their hostages to assume the identities of characters in a television cartoon show to foil the police. A tragic end blackens the comedy to assure that one can live in fantasy for only so long. Historical Chinese epic, Devils on the Doorstep (2000) by Jiang Wen was another genre-jumping black and white classic. Winner of the Grand Jury Prize at Cannes in 2000, what starts out as a small town comedy soon becomes a violent dissertation on World War II.

The first feature documentary to be included in the SAPFF program was The Land of Wandering Souls (Rithy Pahn, 2000) from Cambodia. A deeply sad profile of one family among many who dig trenches to lay fibre optic cable for Internet and telecommunications companies. These people virtually live off the land with atrocious working conditions, paid a pittance and ironically paving the superhighway that will enable Cambodia to be a part of an elitist technological world order otherwise known as the ‘global community’.

Also new to the Festival was the screening of two feature films shot on digital formats. Garin Nugroho’s A Poet (1999) from Indonesia is an intimate portrait of poet Ibrahim Kadir’s experiences during the 1965 massacre of an estimated 500,000 communists. Korean film Tears (2000) by Im Sang-Soo is a gritty street kids drama similar to Kids but with a Wong Kar-wai visual style. Hand-picking young people from the streets of Seoul, Im Sang-Soo utilises the digital format well in creating a verite sense of realism.

Arguably the most popular film was the recently restored and reprinted The Man from Hong Kong (Brian Trenchard-Smith), a classic B-grade martial arts action flick from 1975, starring George Lazenby as the arch-villain, Jimmy Wang as the archetypal Bruce Lee and Sammo Hung in a minor role. Made during an era of no political correctness, The Man from Hong Kong featured car chases, fight sequences, love scenes and classic dialogue that seemed to go round ‘n round like it was stuck in the groove of a bad ’70s disco record.

Two industry development seminars provided insights into filmmaking in Asia. The first seminar was a case study of the filming of The Quiet American (Phillip Noyce, 2001) by far the largest budget film to be shot in Vietnam. Andrew Urban led a discussion with Antonia Barnard (Line Producer) and Roger Ford (Production Designer) about the problems encountered by the all-Australian crew in shooting a film of that magnitude in Vietnam. Although the Vietnamese government was wholly supportive of the crew, they encountered several obstacles and dilemmas (for example, the central square of Saigon had to be recreated in Australia for the bomb scene due to problems importing explosives). A pre-recorded video interview with Chris Doyle proved to be the highlight as he spoke quite candidly about his filmmaking experiences across Asia. “You can’t just throw money on the table because firstly, half of it will disappear into some guy’s pocket and secondly, it could be the wrong table . it’s all about your connections and what they can do for you.” The industry seems to be the same the world over.

The second seminar was a discussion of digital filmmaking chaired by Richard Harris (Australian Screen Directors Association). The panel included Garin Nugroho from Indonesia who spoke about the dramatic flexibility of shooting A Poet on a digital format. Director Im Sang-Soo from Korea also spoke about his ability to capture greater realism by shooting scenes with at times four cameras, most of which were hidden. Terry Jennings from the Australian Film Finance Corporation (FFC) spoke about the lack of infrastructure in Australian multiplexes that deters the exhibition and distribution of films on a digital format. Garin Nugroho had little box office success with his film and Im Sang-Soo claimed that Korean audiences thought they weren’t getting the same value in watching a film shot on DV to one shot on film; the film’s box office was also limited by the 18+ rating.

In its first year, the competition received 70 odd entries from all over Australia, from which two personal documentaries, two animations and six short dramas made up the 10 finalists. SBS’ Eat Carpet provided the prize, picking up five of the ten finalists for their program. The films that won include Susan Kim’s beautiful and moody animations Shadow Play and Driving Home, Linden Goh’s playful My Old China, Chris Richards-Scully’s sci-fi mind-bender Icarus and Melissa Lee’s heartfelt documentary Soshin: In Your Dreams. Among the other short films that screened out of competition, the highlights were Missing Vietnam, Leigh Bancroft’s personal journey to Vietnam, and the realist study of a Vietnamese-Australian family in Delivery Day (Jane Manning, 2000).

The most exciting aspect of SAPFF 2001 was the interest generated by the Asian-Australian short films. At an arts conference “Asian and Australia: Trading In Imagination” held at Wollongong University shortly after the Festival, there was a surprising amount of interest in the quality of the selection of short films that were screened. So much interest that a selection from the program is likely to tour the Philippines, Taiwan and New York. As it has been a core mission of the Festival to promote Asian-Australian filmmakers, such interest represents something of a windfall and we hope to see the emergence of these young artists as they add new colours and flavours to contemporary Australian cinema.