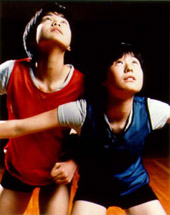 The work of Los Angeles-based avant-garde filmmaker, Sharon Lockhart, bears a rare potential – that of bringing the riches of experimental cinema to a broad film-going public without sacrificing any of its rigor, mystery or inquiry. Whilst she sees herself as strongly influenced by the structuralist-film tradition, Lockhart’s films have the potential to reach a broader audience by virtue of their humanism and anthropological explorations. Among the signs that this promise may already be bearing fruition is the broad film festival acclaim accorded her two most recent films. Goshogaoka played at Sundance and the New Films/New Directors Festival (in New York), both in 1997, while Teatro Amazonas played at the 1999 New York Film Festival.

Goshogaoka is an hour-long film shot in six ten-minute segments. It is set in a Japanese suburban middle school gymnasium, where a group of basketball players go through warm-ups, exercise routines and cool-downs. The basketball game for which they are ostensibly preparing never arrives. The camera position is fixed for the duration of the film while the players move in and out of the frame. A red-curtained stage and proscenium serve as a backdrop and a polished and shimmering reflective wooden floor in the foreground is the surface on which the action takes place.

At first we assume that we are watching, in long-shot, a documentary artifact. Bringing with us certain received notions of the Japanese “culture of conformity”, we note the discipline and order of the routines, the uniformity of the costumes reinforcing these notions. Soon, our preconceptions begin to be unsettled. The choreography of the exercises slowly appears to take on non-naturalistic overtones, hinting at the possibility that they might be stylized. Moving from one segment to the next, the costumes begin to appear less uniform, making traces of individuality more apparent. In medium-shot, we see the players pose for the camera, either alone or in pairs, performing routines for our benefit. The differences separating the players – their physical details, facial expressions, costumes and body language – definitively undermine our clichéd preconceptions of the group as an exemplar of “Japanese homogeneity”.

It turns out that Lockhart spent over two months rehearsing the players while collaborating with Steven Galloway of the Frankfurt Ballet, who choreographed the group. The haute couture runway performances of Japanese fashion designers like Commes des Garçons, and the postmodern dance ideas employed by Yvonne Rainer were, she says, a guiding influence. The “facts” of everyday movement are thus molded by the “fiction” of choreography and stylization.

Goshogaoka is many things: (1) A deliberately composed, elegant visual piece; (2) A structuralist film in the tradition of Michael Snow or James Benning, which nevertheless brings something unusual to the form: an emotional engagement with “characters”; (3) A work that weaves around its documentary source materials a veil of stylization; (4) A sensitive act of group and individual portraiture which is respectful yet attentive; and (5) A film that both invites us to view it and simultaneously consider the act of viewing it.

Pre-dating her rapidly ascending reputation as an experimental filmmaker is Lockhart’s international renown as a photographer. Her approach to film is not unlike that of photography: careful composition, rigorous planning of the frame, scrupulous attention to visual detail and regular use of a stationary camera. Conversely, her photography projects often smack of the filmic: a laborious casting and auditioning process, the employment of successions of frames, serial ordering of images, and a resulting cumulative effect that emerges from repetitions and subtle variations from one image to the next.

I first made my acquaintance of Lockhart’s work last year at the photography exhibit Auditions (1994) at the Museum Boijmans Van Beuningen in Rotterdam. (Her films Goshogaoka and Teatro Amazonas concurrently played at the 2000 Rotterdam Film Festival). For Auditions, Lockhart recreated a first-kiss scene from Small Change (François Truffaut, 1976) in a five-image series, each image capturing a near-kiss embrace between a boy and a girl. The ten “models” were Los Angeles schoolchildren in the age range 8-11, and none of them had experienced an intimate, real-life kiss. In viewing the series, the first image of the series touches us as tender and romantic, but proceeding serially to the others darkens and disturbs the innocence of that first impression. We become aware, as in Goshogaoka, of an underpinning design that challenges our view of the scene as somehow documentary and “real”. The awkwardness of the intimate moment is now inextricably linked with our knowledge of its explicit staging. Where does fact end and fiction begin? 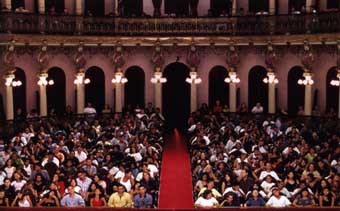 Lockhart set the 35-minute Teatro Amazonas in the Manaus opera house she discovered through Werner Herzog’s Fitzcarraldo (1982). Along with an anthropologist, she interviewed hundreds of local inhabitants and cast 308 of them in the role of an audience. The fixed camera gazes at this audience from the opera house stage. A choir comprising six groups of five singers each, placed out of sight in the orchestra pit, sings a minimalist composition by Becky Allen. Essentially a decrescendo on one single note, the music gradually fades to silence over the course of the film. The amplitude of the audience sound in the mix thus rises relative to the music until it occupies the entire soundtrack in the film’s closing minutes. We never see what the audience is seeing on the stage, just as the actual basketball game is out of bounds in Goshogaoka.

On the one hand, by its sheer duration, Teatro Amazonas coaxes us to register the minute and dense detail that is contained in the opera house audience. On the other hand, this is ultimately a task that is impossible to fully accomplish. After all, the infinite number of small movements and occurrences within this audience body can never be fully captured by our senses. Conversely, each viewing constitutes a new and unique experience, leaving us with a different set of perceived details.

During the post-production process for the film, Lockhart has said, she felt a vague disappointment about this work until the discovery that it achieved its realization only when it was first shown to an audience. Teatro Amazonas cannot exist without an audience in a theatre simply because the film is about the process of one audience looking at another. Calvin Tomkins, in “The Bride and the Bachelors,” (1) paraphrases Marcel Duchamp pointing out the importance of the audience’s role in the construction of an art-experience as follows:

It is the spectator who, through a process of “inner osmosis,” deciphers and interprets the work’s inner qualifications, relates them to the external world, and thus completes the creative cycle.

This experience also depends, for Teatro Amazonas, on the architecture of the theatre in which the screening takes place. Our field of vision includes, in addition to the projection on the screen, other members of our audience, seats both empty and occupied, the physical details and décor of the theatre, and the proscenium which frames the projection. To illustrate, my one viewing of the film occurred at an ornate Eastman House theatre in Rochester, New York. Lockhart, whom I first met moments before the screening, even suggested for me a vantage point, high up and center in the balcony, which would afford a panoramic view of the theatre, its occupants, and the screen. A viewing of Teatro Amazonas sensitizes the viewer to these incredibly small and often ignored practical details that surround a viewing experience, and ultimately makes these details as much a part of the experience as the actual film itself.

Sharon Lockhart’s cinema suspends the audience on a pendulum as it swings between two poles: the source ingredients that are derived from reality (based in fact), and the authorially imposed frame of performance (that yields fiction). The truth, we discover, lies not in privileging any one polar extreme over the other but in recognizing that every point in the continuum simultaneously allows access to the truth while prompting us to question it. By extension, her films offer us a way to look not merely at films but at the everyday, embracing at once what we feel in our hearts to be certainty and what we sense in our minds to be eternally unknowable.