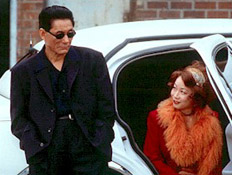 Japanese filmmaker ‘Beat’ Takeshi Kitano has been slowly garnering a cult following in Australia since the release of his seminal 1997 feature Hana-Bi. His follow-up, Kikujiro (1999), was also released locally, and screenings of his work this year at North Sydney’s Japanese Cultural Centre and the Australian Cinémathèque, have attracted substantial audiences. His most recent work, Brother (2000), is about to become the third Kitano movie released in Australia. The new film continues Kitano’s focus on yakuza culture, but also marks out some important new territory. For the first time in a Kitano production, most of the action takes place outside Japan, in the smog-filled streets of Los Angeles. As an international co-production, the film also heavily features American actors in the cast.

Brother centres on Yamamoto (played by Kitano), an aging Tokyo gangster left isolated after his boss is murdered in a war between yakuza families. After receiving a tip-off that he is a marked man, Yamamoto flees to Los Angeles, where he manages to track down his younger brother (played by Claude Maki, previously seen as the main character in Kitano’s 1992 feature A Scene at the Sea). Sent to the US to study, his brother is now involved in street-level dope dealing. Yamamoto quickly assesses the situation, and uses a minor dispute between his brother and a supplier to commence a murderous drive to the top of L.A.’s crime world. Along the way, he builds a new family of African- and Japanese-American ‘brothers’, imbuing the Americans with yakuza notions of honour and loyalty. Their ‘business’ expands rapidly, until they run foul of the mafia, triggering a war from which only one side can emerge alive.

After the slightly saccharine Kikujiro, Brother marks a return to the blood-drenched ferocity of earlier Kitano films such as Sonatine (1993) and Hana-Bi. Brother‘s narrative trajectory echoes these two earlier films, revolving around a taciturn older man who commands the respect and loyalty of his younger subordinates. Once again, Kitano’s character becomes embroiled in a situation that spirals out of control, and the story ends in death. Brother also retains Kitano’s trademark scenes of off-kilter humour, sudden violence, and an episodic narrative structure. But whereas previously story and style were closely melded to Kitano’s idiosyncratic thematic concerns, Brother plays-out as a curiously hollow genre piece, distinctly lacking the meditative depth of the director’s best work.

Since Violent Cop, his first film in 1989, Kitano has drawn heavily on the Japanese gangster-film tradition, but generally in order to subvert audience expectations, de-emphasising action in what is traditionally an action-driven genre. Sonatine, for example, was structured entirely around the destabilising effects of enforced inactivity on a group of betrayed yakuza. Early in Sonatine, Tokyo boss Murakawa (Kitano) is sent to Okinawa to sort out a seemingly minor dispute between local families. Once there, the war escalates and Murakawa and his men are forced into hiding at a remote beach house. Here the action pauses for what initially seems like an interlude, but this break in the action is drawn out until it comprises more than half the film’s length. As their time in hiding slowly builds, frustration and boredom are replaced by a juvenile playfulness, tinged with repressed sexual longing and shot through with malicious intent. By divorcing these men of action from their usual activities and environment, Kitano is able to reveal and explore the rigidly codified structures, ritualised behaviour, and repressed emotions that determine their violent relations with the world and each other. Genre is generally about invoking and satisfying audience expectations, allowing a pleasurably uncritical identification with the actions of characters we understand. Kitano’s great innovation in Sonatine was to isolate his men of action, trapping them in a non-action setting, encouraging the audience to critically examine their behaviour and reconsider the drama that introduces and concludes the film’s story.

In contrast, the emphasis on narrative-drive in Brother leaves little room for contemplation of the characters’ actions or thoughts. In the words of Tony Rayns, Brother is “a straight-ahead action movie, planned and plotted like a military campaign.” (1) Which would be fine, except that the planning and plotting feel so mechanical, and are so predictable, that the story plays-out like an empty paean to violence, stylish and imaginatively shot, but essentially hollow. The endless gun-battles are enacted with the same blank, lack of emotion and expressionistic visual-style seen in Sonatine, but without that film’s broader de-construction of yakuza rituals and codes of masculinity. In Brother, death rules supreme, with the plot simply tracing an endless cycle of annihilation, utterly unredeemed by any intent or outcome.

The particular manner in which Kitano’s character provokes his own bloody destruction also places Brother at odds with the director’s previous work. In his Japanese films, the characters played by Kitano are either policemen or gangsters, but they are also men trapped in a system. From his first film, law enforcement and organised crime have been locked in a violent embrace, with police and yakuza alike inhabiting the same half-legal, corrupt border region on the fringes of Japan’s ‘legitimate’ institutions of power. Whichever side of the line they inhabit, his characters’ actions are determined by situations and rules beyond their control. They are men pushed into corners so tight that it is only through deliberately suicidal, fatalistic courses of action, unhindered by modern codes of legal behaviour, that they can exert some small measure of influence over a system that always exceeds them. It is the hopelessness of their actions that lends them a certain grace. As outcast individuals, with all the odds stacked against them, they manage to achieve a small, personal goal, and reach a certain state of transcendence. Brother, however, begins with Kitano’s character escaping the yakuza altogether. He reaches America alive, basically free, and without institutional ties. His resumption of his Tokyo lifestyle in America is a question of choice. He is a man in charge of his destiny, and as such his willing, single-minded embrace of death and destruction, not only for himself but his whole gang, seems somewhat gratuitous.

Formally speaking, Kitano’s earlier films were also distinguished by the manner in which he deployed his own performing body. There is something hypnotically fascinating about Kitano’s sheer weight of presence on screen, and his films have always worked best when he himself has taken the lead role. Not that he in any way resembles a traditional leading man. He is anything but handsome, and his lumbering, lopsided gait is totally lacking in elegance. But there is something in his twitching, hunched countenance that conveys a barely-contained violent anguish, a centre of repressed feeling that sits at the heart of his movies like the deceptively still eye of a hurricane. Kitano’s presence allows his narcissistic obsession with his own physiology to provide the focus of his compositions, rendering the image of his own body the centre of the displaced autobiographical obsessions and fantasies that anchor his stories. This aspect of Kitano’s approach was most successfully realised in Hana-Bi, where he was able to use the image of his own damaged face, badly scarred in a severe motorcycle accident in 1994, as the physiological expression of the trauma and emotional scarring underlying the lives of all the film’s characters. (2)

Unlike Hana-Bi, Brother is largely uninflected by Kitano’s personal history. The film opens with a mid-shot of Kitano; stooped, smoking, leaning on a pole in a typically introverted pose. We then cut to a skewed long-shot, revealing Kitano standing outside Los Angeles airport, a Japanese icon transplanted to the ultimate post-modern American setting. The next few scenes have a slightly comical tone, as Kitano’s character makes his way to a hotel and attempts to negotiate the intricacies of America’s tipping system. This opening sequence seems to signal that Brother will hinge on an unpredictable friction between the post-modern, surface obsessed American city, and Kitano’s unique cultural and philosophical sensibilities. 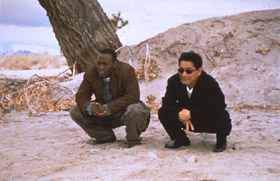 Unfortunately, the film never builds upon this promising narrative premise. As Kitano himself admitted in an interview with Tony Rayns, the story doesn’t actually need to be set in L.A., because the film never interacts with the city on the city’s own terms. (3) Kitano’s character, Yamamoto, remains essentially unmoved by his new environment, and after their first disconcerting encounters with yakuza-style brutality, Yamamoto’s American crime brothers are unquestionably accepting of his imposition of displaced cultural standards and behaviour. The film glosses over their potentially interesting attempts to come to terms with the feudal subtleties of yakuza codes of allegiance and subservience, which are so at odds with America’s upwardly mobile and individualist ethos. The net result is that the film’s focus on ‘brotherhood’ and loyalty comes across as somewhat stilted and forced. The fascinating and unlikely bond that develops between Yamamoto and the African-American ‘brother’ Denny (Omar Epps), for instance, is tantalisingly sketched, but never really examined. The viewer doesn’t get a sense of why Yamamoto singles Denny out from the gang, and the script never gives Omar Epps the opportunity to develop any sub-textual qualities in his character that might prompt such special treatment.

At a broader level, it remains unclear how Yamamoto is able to elicit such devotional loyalty in his American brothers. In both Hana-Bi and Sonatine, it was clear that beneath the seemingly emotionless exterior of the characters played by Kitano, there lay a deep commitment to those he felt were dependent on him. In Brother, Yamamoto’s presence initially brings material riches for his American gang, but from the moment he arrives in L.A. his actions principally serve to wreak havoc on their lives. For street-level dope-dealers, they are amazingly blase when he commences a series of murders in which they are directly implicated. The zombie-like manner they follow Yamamoto into a clearly un-winnable final showdown with the mafia implies an overriding vein of deep emotional commitment that is never adequately explored or explained. This lack of development in the relations between characters is made worse by a jarring last scene, which spells out the notion of brotherhood in a painfully obvious fashion totally at odds with Kitano’s usual oblique style. The scene looks suspiciously like a last-minute addition designed to make the film more palatable for mainstream cinema audiences.

Ultimately, Brother works best as a fairly straightforward genre piece, mixing elements of both the American and Japanese gangster traditions. But as so often seems to happen in international co-productions, the film’s hybridity, potentially its most interesting aspect, in practise serves only to water-down the thematic potential of its constituent parts. Kitano has always demonstrated a skilful ability to simultaneously invoke and intervene in the conventions of genre, twisting our expectations in order to express his own distinctive viewpoint and vision. Brother demonstrates Kitano’s technically adept ability to blend different national traditions of the gangster genre, but the film disappoints in its failure to develop the potential of this cultural mix.