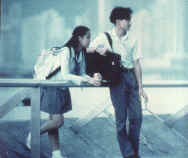 It seems so long ago now but Autumn Moon (1992) is one of those flurry of second-generation Hong Kong New Wave works (along with Wong Kar-wai’s Days of Being Wild, Stanley Kwan’s Actress, Jacob Cheung’s Cageman) that found their way into the collective consciousness of world cinema in the early ’90s. All these works predate the commercial decline of Hong Kong cinema starting from around 1993 or so (a decline that has persisted into the post-1997 present), and as such, may be regarded as marking the tail end of Hong Kong cinema’s ‘golden era’ of the late twentieth century. Not long after the decline set in, Clara Law migrated from Hong Kong to Melbourne – as it turned out, a highly astute career move in that it has yielded Floating Life (1996) and The Goddess of 1967 (2000), two idiosyncratic and challenging works that cross national-ethnic boundaries but yet are still quintessential Clara Law pictures (and in a sense, quintessential Australian pictures too).

There is an astonishing breadth to these Australian works, both of which seem to move with apparent ease from high-flung melodrama to abstract representations of character with landscape, props and colours playing an inexorable part in the narrative. Both pictures critically examine the myths of migration (domestic and across nations), ethnicity and the psychological fixtures of modern man founded upon family and financial security. Carefully wrought, Law’s works (almost all of which have been scripted by her real-life partner Eddie Fong) are prime examples of design and passion – the mixture doesn’t always work and the results so far are invariably flawed. Despite her achievements to date, it may be said that Law has yet to come up with a breakthrough work, but Autumn Moon comes pretty close to being one. Narratively, the movie deals with a Japanese male traveller’s somewhat obtuse relationship with a Hong Kong girl (perhaps echoing the production circumstances of this Japan-Hong Kong co-production), complete with ruminations on postmodern urban sterility, immigration, and the transience of life.

The young girl lives with her grandmother in a high-rise apartment flat (her parents have flown the coop, so to speak, by going to Canada to fulfil residency requirements as new migrants, leaving their young daughter to look after the grandmother, or the grandmother to look after the girl – one is never quite sure). This apartment and its environs become the setting for a fey-like two-hander comedy of modern manners as the young girl basically inducts the Japanese visitor into Hong Kong life. Not being able to speak each other’s languages, they communicate in halting English, but the film provides both characters with interior monologues in Chinese and Japanese which are delivered with such warm intelligence that we feel a sense of detached compassion about the characters. While all around is an impersonal world of concrete blocks of buildings and technical gadgetry, the two mutual strangers try to breach the communication gap essentially through a cerebral process built upon the perception that they are both modern nomads who must try to deal with their sense of desolation and lack of identity. Law proves that she has the knack of creating something out of ordinary material. She nurtures her characters, eliciting charming performances from the actors – no mean feat when one considers how mundane her characters and settings really are.

Finally, Autumn Moon also assumes a minor significance in retrospect since its ingredients are really the fuel that stokes the engine of The Goddess of 1967. Both films share key structural stratagems and characterizations – in The Goddess, a pensive Japanese ‘stranger’ willy-nilly intrudes into the life of a blind Aussie girl (played by Rose Byrne). They embark on a journey into the outback heart of darkness which isn’t unlike the empty shell of Hong Kong’s modern heartland of apartment blocks where the majority of Hong Kong people dwell. On the other hand, Autumn Moon also fits rather snugly into Clara Law’s canon of films dealing with the theme of the Chinese diaspora – one that has obsessed Law since They Say the Moon is Fuller Here (1985), her 16mm graduate work done for the National Film and Television School, UK. Like The Other Half and the Other Half (1988, Law’s first feature after her graduation), Farewell China (1990), and subsequently, Floating Life, Law depicts the Chinese people’s age-old obsession with migration – an obsession marked by psychological wounds inflicted by modern political tragedies such as the Tian’anmen Incident and the 1997 changeover – and how it has obscured true human values. Migration appears to be a quest for the impossible – a redemption of one’s soul in a foreign land. In Autumn Moon, Law attacks the migration obsession at its root, by insinuating the loss of values for example by dwelling on Hong Kong people’s preoccupation with modern objects and technology which has taken the place of real communication between people (a point emphasized by the recurring helicopter shots of high-rise apartment buildings as architectural monoliths seen from above). Unlike her other pictures, however, Autumn Moon possesses a more benevolent heart. It may well be a study in postmodern angst but Autumn Moon‘s contemplations on the pitfalls of travel and migration endow it with soul.