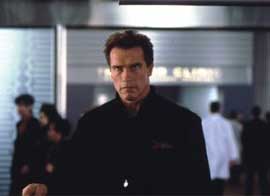 I remember the days early in Schwarzenegger’s career. From the early ’80s, right up until the start of the ’90s. He was king of the hill, a man above all men, a hero with a broadsword or an Uzi. These were the days of high adventure. But a darkness has fallen over his reign of the box-office, and he has long since forgotten who it was that raised his star to such glittering heights. It was John Milius with the incomparable Conan the Barbarian (1982); James Cameron with the high-octane The Terminator (1984) and its soul-searching sequel (1991), as well as the better-than-James Bond True Lies (1994); John McTiernan gave us the unprecedented Predator (1987); and there was also Paul Verhoeven and the mind-bending Total Recall (1990). Great roles, great concepts, great writing, and great direction.

Coming into international stardom at the start of the ’80s, at a similar time as Sylvester Stallone, there is no doubt that Schwarzenegger is a figure of great representational possibilities. With muscles the likes of which the world had never seen he was more than any male star before him and more than any action hero. He was fucking huge! He wasn’t the hero inside all of us. No, he was the hero that we could never be. He was larger than life. He was a real superman. He didn’t need special effects, because he had these monstrous muscles that automatically validated all his on-screen heroics. In Conan his physique was narratively explained through the Sisyphean task of turning a wheel for grinding grain, and these muscles were later granted the indestructible strength of a steel chassis for a series T-800 Terminator. It was as if the monstrous proportions of his physique needed these narrative representations to explain and justify the seemingly impossible. And the films of the mid-to-late ’80s played upon the solidification of this physical superlative, and confirmed his status as the most important of the action stars.

There is no doubt that Schwarzenegger has an eye for interesting detail, often starring in futuristic films with high concept premises that weren’t ashamed to raise ethical, cultural, or philosophical issues. The Running Man (1987), despite some clumsy dialogue, was a tongue-in-cheek attack on audiences’ propensity for seeking violence in the media, and the media’s ability to serve this up. In a futuristic society, a totalitarian order keeps the masses in check by distracting them with a television show called “The Running Man”. After a few minor convolutions Schwarzenegger finds himself a victim on this show, where he and his friends must run for their lives while being pursued by a selection of “stalkers” with an exciting array of weapons, such as chainsaws and flamethrowers. Through the manipulation of the state-controlled media, Schwarzenegger is portrayed as recently escaped convict, known as the Butcher of Bakersfield for a crime he didn’t commit. This film plays with the very conventions it sets in play, whereby the audience will howl for blood as long as it believes it is the guilty that suffers the violence. Hence the roar of excitement when the shows charismatic host shouts: “Here he is, ready to pay the price for our home audience! In person, the Butcher of Bakersfield!”

In the same year, Schwarzenegger starred in The Predator, another film also with a science fiction bent. Neatly broken into two halves, this film has the audience believing they’re watching a simple military film as Schwarzenegger and his team attempt to rescue a missing politician in the South American jungle. Although this plot motivation is not much more than one of Hitchcock’s famous McGuffins, it is a McGuffin that strongly hints at the U.S. government’s illegal incursions into foreign parts of the globe. Then suddenly this film twists things around so that humanity’s greatest cinematic hero becomes a dumb animal, hunted for the amusement of a superior alien being. The Predator quietly reminds us of something seen (and fortunately soon forgotten) in Conan the Destroyer (1984) (1). In that film, Wilt Chamberlain is substantially taller than Schwarzenegger, but he’s not nearly as broad and ultimately he is no match for the barbarian. But the Predator is taller and bigger and stronger, and the narrative will not conspire to give Schwarzenegger the knockout punch. Or anything close to it. It is only when Schwarzenegger’s character abandons his technological accoutrements in favour of sticks and stones and a mud pack that he is able to defeat this other-worldly foe. And there is nothing triumphant in Schwarzenegger’s defeat of the Predator. It was The Terminator that made Schwarzenegger such a huge star. James Cameron expanded on John Milius’ great strategy in Conan the Barbarian of little dialogue and simple facial expressions. And no smiling! This man looks truly stupid when he smiles.

Unfortunately, The Sixth Day is full of smiles and dialogue. Schwarzenegger’s character, Adam Gibson, is a happily married man who operates a helicopter charter service. It’s his birthday, he feels great, and he’s in great shape, which he confirms by flexing his biceps in the mirror (2). Schwarzenegger has a great jaw and is at his best when looking mean, or even slightly pissed, but certainly not happy. When he returns home from an uneventful day at work he makes the startling discovery that there is a clone of himself in the living room enjoying his birthday party. Pretty soon he is on the run for his life, as he is living proof of a conspiracy that has defied all anti-cloning laws, known as the “Sixth Day” law (3). Yet he’s never really angry or vengeful. He always seems kind of confused, and with Schwarzenegger’s limited facial expressions, he mostly looks goofy.

Once again, there is a high concept at work in this story, especially as cloning has become a hot button topic in the last few years. Set in the near future, cloning is a definite possibility, even if the represented technology is implausible, but it is publicly denied. Behind this conspiracy is Michael Drucker (Tony Goldwyn), head of a company that employs a scientist, Dr. Griffin Weir (Robert Duvall), who has innovated the technology to the point where a clone of individual can be up and running within a very short space of time. Drucker has been using the advantages of cloning, such as the restoration of a dead loved one, to gain sympathetic votes from politicians so that one day the laws can be changed to his advantage. When he is assassinated by an anti-cloning terrorist during a routine adventure with Gibson’s charter agency, he is cloned to cover up the crime. The problems for Gibson arise because he has swapped places with his partner, Hank Morgan (Michael Rapaport), and Drucker’s company has replaced the wrong guy with a clone. If they can kill Gibson, no one will be the wiser.

The emotional and ethical conundrums posed in this film, its heart, are supplied through Dr. Weir’s problem of trying to extend the life of his beloved wife. He has already replaced her at least once with a clone, but without his knowledge Drucker has genetically modified all clones with defects that will limit their life spans. Dr. Weir’s wife will never live beyond a few years, and Drucker believes this will keep him in line. By the time this becomes a plot point, Gibson has teamed up with his own clone and begun the climatic attack on Drucker’s headquarters. The dramatic failure of this film is the narrative’s inability to sacrifice one of the Schwarzeneggers for the life of the other during this climax. Of course Schwarzenegger is not going to die at the end of a film he stars in, but having two Schwarzeneggers survive leaves a gaping contradiction, where cloning is considered unethical, and killing a clone is murder. It wouldn’t be such a problem if it were not for the fact that Gibson’s pursuers, a group of clones of clones of clones, are constantly being killed in their comical efforts to capture the big guy, suggesting the lack of value in the life of a clone. Indeed, every clone in this film either sacrifices themselves or is violently killed, except the Gibson clone. The lame explanation at the conclusion of the film, that being human means understanding and valuing a human life is loaded with unrealised irony, and the philosophic questions inherent in this topic will not be answered by this film.

A special mention needs to be made of Roger Spottiswood, who has directed The Sixth Day with the same ineptness that he brought to the James Bond film, Tomorrow Never Dies (1997). It seems more than coincidental that both films are derivative of so many other films. Tomorrow Never Dies was a bad concoction of good elements from earlier Bond films, and now The Sixth Day is a mixture of elements from other science fiction films, including Schwarzenegger’s films. It’s like Blade Runner meets Total Recall, without the philosophy or irony of either. Which would be bearable if it weren’t for Spottiswood’s total inability put together an action sequence. I don’t even mean an exciting action sequence. The shots of this film are arbitrarily put together with no rhyme or reason, creating haphazard action that is barely cogent. Add to this some of the weakest special effects in years, and you have a film that is only able to limp along on the value of its impressive production design, particularly Dr. Weir’s huge laboratory which includes a massive tank of clone bodies.

Once upon a time Schwarzenegger made action films for adults. Now his films are banal attempts to engage a PG audience, without challenging or shocking them in anyway. As he ages it is becoming less plausible that his physique can dominate the screen the way it once did, evidenced in this film by the lack of shirtless action, and is becoming imperative that he finds some projects controlled by a director with vision. And a director not afraid to exploit Schwarzenegger in a way that highlights his (still viable) iconic status and potential, without pandering to his desire to explore his acting range (which was never really viable). It may be disappointing, but he will never age gracefully onscreen the way that Sean Connery and Harrison Ford have, but that doesn’t mean audiences and fans have to suffer through films like The Sixth Day.