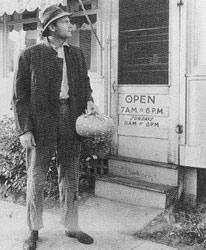 Sullivan: I want this picture to be a . . . document. I want to hold a mirror up to life. I want this to be a picture of dignity . . . a true canvas of the suffering of humanity.

LeBrand: But with a little sex in it.

Sullivan: [reluctantly] But with a little sex in it.

Life is “a cockeyed caravan” according to a wiser John Lloyd Sullivan at the end of his travels. His attempt to “hold a mirror up to life” had merely shown him how the average Joes of the world are better off with movies like Ants in Your Pants of 1939, his last film, than with O Brother, Where Art Thou?, the one he intended to make after he set out on the road dressed as a hobo with ten cents in his pocket. He learns this somewhat transparent lesson (rather sententiously illustrated by the writer/director Preston Sturges) the hard way. Having lost his memory after a blow to the head in a rail yard, he winds up in a hard-labor prison, while the rest of the civilized world (read: Hollywood) believes him dead. One evening the local preacher decides to sweeten his sermonizing with Disney cartoons, reducing the audience of hard-timers to tears of laughter. Sullivan, astonished, wonders from what mysterious source these hopeless men can have found an excuse for such merriment. Reluctantly, he joins in, abandoning himself to the tide of laughter sweeping the audience, albeit momentarily, away from the misery of their lives.

Preston Sturges pokes fun at virtually everything in Sullivan’s Travels – including (luckily) himself. While sparing neither the single-minded hucksters otherwise known as producers nor the successful director of comedies suddenly gripped with a social conscience, Sturges also attacks just the sort of movie Frank Capra was making at the time – Meet John Doe (1941). Capra himself had also been a successful director of comedies (It Happened One Night [1934], You Can’t Take It With You [1938]), before his seriousness got the better of him. When Capra tried to combine his social conscience with his comedic genius, the results were usually uneven. While Mr. Deeds Goes To Town (1936) was initially successful as a serio-comic look at Depression-era economics, Capra found himself increasingly at odds with the status quo. And his populism pushed both Mr. Smith Goes To Washington (1939) and Meet John Doe into perilous territory. Neither film had a suitable ending, as if Capra, having confronted Good and Evil so convincingly, couldn’t decide who should win.

Sturges never possessed such ambitions, yet he approaches, in Sullivan’s Travels, the very territory that would ultimately undo the Capra ethic. One of the cardinal rules of dramaturgy is never to tamper with what is generally known as the tone of a piece. Sturges knew that his bread & butter was satire (even if it employed the very broadest slapstick). He bravely tried to leaven his bread with an altogether serious episode in his satire – the moment when Sullivan is hit in the head. Thereafter, Sullivan’s good intentions become the paving stones of the Road to Hell. Ironically, of all Sturges’ films, Sullivan’s Travels is probably the best known today precisely for its peek at the altogether depressing facts of Depression-era America: the hordes of hobos jostling for a place on the bread line or a space on the freight car or a cot in the flop-house. But, rather than seek some sort of message from this brush with reality, Sturges only uses it to reinforce his labored point – that none of this matters to your average audience, that what we want above all is to forget all that, to be entertained by something so richly superfluous, so magisterially superficial that we are taken, with our hearty consent, to a place so beautiful or ridiculous that life itself – our life – becomes a distant murmur, a bothersome echo outside the tender confines of the theater, a world with which we must all rudely reacquaint ourselves at the end of every such movie.