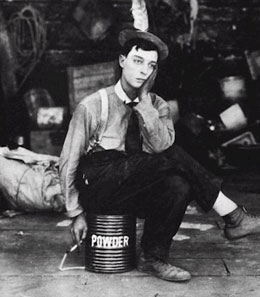 It is possible to argue that to love the work of Buster Keaton is to love the cinema, or at least a certain kind of cinema of movement, mise en scène and limitless visual invention, and that alternately exhibits a kind of masterful control and freefalling abandon. Keaton’s is a cinema that is driven by a highly articulated style and a passing respect for the regulating realm of classical narration (just look at the command of narrative exposition, classical style and genre in a film like Our Hospitality [1923]). This is partly illustrated by the ways in which Keaton plays with romance and the idea of heterosexual coupling (observe how Keaton treats his female stars, and they treat him, in Sherlock, Jr. [1924] or The General [1927]). In this respect, The Scarecrow and The Electric House are contrastive works that do not focus equally on the trappings of classical storytelling, nor on the key agents of this storytelling, characters. Although they were made less than two years apart, one can see the radical development of Keaton’s storytelling prowess in the progression from the relatively discrete gag structure of The Scarecrow to the more fully integrative form of The Electric House (which inventively fashions its story around one basic concept).

Keaton’s is a materialist cinema, so it is unsurprising that his films routinely address the ‘materiality’ of early twentieth century modernity and its impact upon the human body, mind and spatiality. In many respects his films plot the fate of characters becoming competent to new technologies, objects and environments. For example, in The Electric House Buster quickly learns to adapt to his new profession as an electrical engineer (after getting his diploma mixed up) and eventually utilises the seemingly out-of-control mechanical house to help defeat the actual engineer who is trying to seek revenge. But Keaton is also a pragmatist and his films routinely show characters responding to problems in simple, physical and ‘logical’ ways. Thus, on encountering the problem of how to electrify a house, Buster simply reads an introductory book about harnessing electricity.

Technology abounds in Keaton’s cinema, but this technology is of a particular kind. In Modern Times (1936), Chaplin emphasised the alienating qualities of the machine, its ability to transform its human operators into a mirror image or function of itself. Keaton’s view is very different as he regards and celebrates the cinema itself as such a technology or machine. But he also utilises this quality to produce openly artificial but also wondrously pragmatic effects (and, of course, wonderfully funny jokes). Thus, the sun that quickly rises at the beginning of The Scarecrow is both magical and self-consciously phoney or material (a similar effect is often produced through the transition between one place and another in Keaton’s films, an effect parodied in Sherlock, Jr.). Nevertheless, what is often most beguiling about Keaton’s films is the sheer level of invention and ingenuity that is on display. In the opening scene of The Scarecrow, Buster and his flat-mate are shown living in domestic harmony, with each element of the house’s interior and the film’s frame revealing an ingenious piece of adaptation, optimisation and duplication (for example, the record player also serves as a stove). But it is also important to point out that the labour-saving devices in both films are plainly ridiculous, a parody of the transformative devices that were then starting to flood the American home. The technology of The Scarecrow neatly fits its rustic and ostensibly working class context, relying upon levers and pulleys and stolen gas rather than the decadent squandering of electricity highlighted in The Electric House (used to electrify a pool, pool table, stairs and a dumb waiter). Nevertheless, it is the more difficult and less humanised technology of The Electric House that requires the more extreme forms of adaptation.

The Scarecrow is a more episodic film than The Electric House. It is less integrated and relies more fully on conventional comic forms such as the slapstick chase and the contested pursuit of a love interest. Thus, despite the ingenuity of the film’s opening scene (in which Buster and his house-mate show off the clever industry of their mechanised home), it bares only a passing relationship to the more conventional high-paced hi-jinx of the rest of the film. It encounters speed rather than fixates on technology (thus, although cars and motorbikes appear in the film the characters also run and ride horses, with no hierarchy insisted upon). The Electric House is a more concentrated, developed and existential film (a quality partly related to the impasse of emotion more clearly registered on Buster’s face). Although the electrified technology provides most of the film’s gags, the film also relies upon these elements to hint at the dislocation between characters and the spaces they find themselves in. Thus, the romance in the film – Buster takes up the job of electrifying the house to woo his employer’s daughter – is purely perfunctory and merely a justification for the actions Buster performs. The place of this ‘romance’ is signified in the film’s conclusion. In trying to save his life, the girl actually flushes Buster out through the sewerage system, mechanically jettisoning him from the plot that was itself nothing other than a mechanism – a perfectly functioning machine to showcase a series of ingenious gags and situations.

Amongst the most remarkable aspects of Keaton’s cinema can be found in his use of framing, mise en scène, and on- and off-screen space. Thus, his mise en scène is often extremely detailed, the field of the image fully exploited, and the four sides of the frame equally corruptible, and yet, his films are routinely fluid and easily readable. Similarly, much of what I have said might suggest that Keaton’s films are overly constructed, perhaps lifeless. But, similarly to the work of Jacques Tati, this meticulous attention to detail also opens up a degree of freedom and life. Thus, Keaton’s careful working out of where to place himself, what to put in the frame, and how to interrelate objects and characters, also enables the audience to watch ‘unimpeded’ and learn to scan the total surface of the image.

The Electric House is often discussed in relation to the injury Keaton sustained during its initial filming (the film was subsequently postponed for almost a year). This injury, a broken ankle sustained while performing one of the stunts on the electrified stairs, tells us quite a deal about the nature of Keaton’s cinema and its incipient realism. Despite the artifice and trickery of Keaton’s films, we also perceive that what we see is indeed going on in front of the camera, is being captured as it unfolds, and is to a large extent real. Thus, despite The Electric House providing a parody of new technology and its effects on domestic life, the film performs a very real encounter with a particular location and the transformative nature of this technology (and how the film itself adapts by quickly editing to a shot outside the house of Buster diving from the top floor into the outdoor pool). The Electric House was in fact restarted from scratch, the house rebuilt in order to make it safer for the combustible nature of Keaton’s comedy. But rather than see this as a sign of conservatism, it is more accurate to regard it as indicative of a process of adaptation, refinement and mechanisation – an acceptance of the mechanistic or materialist nature of cinema and Keaton’s own variation upon it. Thus, the film itself has learned and adapted, and more keenly found ways to combine technique, style, narrative and performance. It is not surprising that within six months Keaton had moved exclusively on to the more expansive canvas of the feature film.