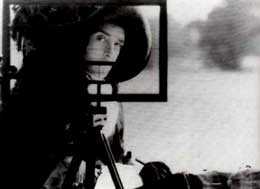 In 1981, Peter Greenaway spent a warm summer drawing his house on the Welsh Border. So that the house was in the same light every time he sketched it, eight set views were drawn at eight set times of the day. The carefulness of the plan balanced the chaos of its enactment: cows, neighbours and children were equally constant, if pleasurable, interruptions. Anybody who has seen The Draughtsman’s Contract may find this scenario familiar. It was the basis of the film. But the relevance of any biographical detail stops there.

Like all of Greenaway’s work, The Draughtsman’s Contract addresses issues of representation: between mediums (drawn and photographic representation); between art and nature (the inbreeding between landscape art and ornamental garden design); and the value of classical naturalism in art.

Though he is described snidely as a materialist, the Draughtsman, Neville (played by Anthony Higgins), is an idealist. He prides himself on being able to draw something exactly as it appears. Just like a camera, his drawings supposedly re-create what exists, without interpretation or expression. His understanding of drawing techniques and systems makes him confident of this.

Yet in Greenaway’s world, systems or codes of any kind are treated as inadequate, hopelessly subjective fantasies that deserve contempt, not respect. Categorical thinking claims it makes the world easier to understand; Greenaway maintains it distorts the world by forcing it into unnatural categories. Many of his films satirise catalogues and organising principles, firstly by presenting absurd examples of each, and secondly by structuring events around them (counting in A Zed and Two Noughts [1985]; alphabetical listing of names beginning with the letters ‘fall’ in The Falls [1980], etc.) Paradoxically, as much as he distrusts systems, he sees them as the only viable alternative to narratives, which ‘do nothing more than illustrate text’ (1).

In this sense, the film, through Neville’s overdone polemic, satirises classical naturalism in art. It is perhaps appropriate that Greenaway’s first popularly released movie should begin with a declaration of independence from classical naturalism, in favour of the modernist acceptance, and desire to work with, the flatness of images.

So Neville is doomed from the start – not only by his avarice but also by the internal contradictions of the idealism he represents. An idealist in a world created by a relativist can only prepare himself for tragedy.

The issue is complicated further when we remember that it isn’t Neville himself who actually drew the thirteen illustrations, but Greenaway. As Leon Stienmetz says, “Mr. Neville draws only what he sees, which is precisely the opposite of Mr. Greenaway, who draws what he thinks, except, of course, when he wants to assume someone else’s personality – in this case, Mr. Neville’s.” (2) The hand we see on the drawings is the directors’, not the draughtsman’s, but a close connection between the two is established. As a result, the definition of what is fictional (real only in the world of the film) and actual (real outside the film, a thing in itself) is blurred. (Not that this couldn’t be asked of any prop in any film. Was the ocean paid for its performance in Jaws?) Are the drawings then to be taken as independent artworks that are being used as props in the film, or were they clearly created for the movie, and as such just accessories to it?

The Draughtsman’s Contract is the culmination of many themes that were developed in earlier films. Amongst others, landscape features prominently in A Walk Through H (1978), where the surface of a set of Greenaway’s paintings are treated not only as abstract maps of an unseen landscape, but simultaneously as the landscape itself.

In The Draughtsman’s Contract, we are given both – the landscape and its representation – but in circumstances that make the distinction between the two ambiguous. While the plot constantly reminds us of what is left in and what is left out of the drawings, the self-reflexive style of the film (Marxist New Wave meets historical drama – the most aristocratic genre of them all) constantly reminds the viewer of the similar processes at work in the film itself.

Greenaway’s interest in these themes began in the 1970’s, with a fascination with landscapes and Land art, as well as seventeenth century French landscape architecture (which Greenaway saw as “Nature rearranged to make a stage… a form of unconscious pre-Land art Land art.” (3) In The Draughtsman’s Contract we see a garden that has been grown as if it was drawn, and then documented in a drawing.

The Draughtsman’s Contract is still the best introduction to Greenaway’s work. It articulates the themes that dominated his films from the early ’70s to the late ’80s, and its minimal formal devices anticipate the changes that were to occur in Darwin (1992) and Prospero’s Books (1991). Speaking recently, he said “It would be impossible for me to make The Draughtsman’s Contract now. My interests would be very different, so much so that, at last, after long resistance, I am negotiating for an American company to remake it.” (4) One wonders why someone who speaks with such vehemence of the sentimental laziness of American movies would permit them to remake one of his own. The film, by Hollywood standards, is unsatisfying: the murderers are never revealed; conflicts aren’t resolved. One suspects somebody as keen on interdisciplinary permutations as Greenaway would be curious about what such a remake would reveal about his own work. He proudly slides from medium to medium, self reference to external reference, with the same set of issues and themes: he doesn’t make definitive statements on one subject, and then move onto another, but rather repeats variations upon the same subjects and allows the differing ideas that result to accumulate. For someone who operates like this, a remake could be seen as another variation, and thus an extension, of their own work – one that, unlike their own work, can be conveniently disowned if ruined in the process.