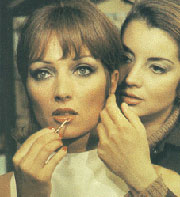 I do not even want to start speculating on what an uninformed English speaking Internet chat room user would make of the French title Les Biches, but this “inconvenient” title has created a great deal of confusion in the English speaking world. The film is actually known under several different translations, from the literal The Does, to more adventurous attempts at capturing the original meaning, such as Bad Girls, Girlfriends or The Darling Does.

This is significant to the extent that it echoes divergent accounts of the treatment of (bi)sexual relationships in the film. The strange love triangle between Frédérique (Stéphane Audran), Why (Jacqueline Sassard) and Paul (Jean-Louis Trintignant), forms the narrative core. The bizarre geometry of their passion, so characteristic of Chabrol’s “mature phase” (almost unanimously considered to begin with this film), has made all attempts to read the characters’ motivation very difficult. In fact, many reviewers of the film have commented on its “opacity of motivation” (1) and concluded that “the ambiguities of motivation render a ‘precise’ interpretation quite impossible.” (2) Arguably, this was deliberate and intentional, and Why’s unusual name could serve to substantiate this claim, as if Chabrol himself was unable to answer the question about the mysterious forces driving the three main characters.

It is indeed hard to resist the temptation to read Les Biches primarily by trying to make sense of the relationships in the central triangle, precisely because of their prominence in the plot. However, I propose to take a slightly different route; while the importance of sexual relationships in the film should be acknowledged, sexuality is more of a symptom of the overall condition than the condition itself. Chabrol has made the depiction of bourgeois decadence a recurring motif in his films, and Les Biches is no exception. The most important relationship in the narrative, the one between Frédérique and Why (Paul is, in Chabrol’s own words, a “man-object”), begins with seduction and guides us through different stages of love and jealousy, its propelling factor being the power-game of domination and submission. When Frédérique (literally) picks up Why in the film’s prologue she wears a fur coat, a symbol of both sexual promiscuity and domination. Why, who is crouched on the sidewalk of a Paris bridge drawing does (les biches), is automatically in a submissive position. The first part of Frédérique’s body she sees is the feet. Reinforcing this perspective, a later ménage à trois scene by the fireplace has Frédérique stretched out on the sofa and both Why and Paul on the floor, literally at her feet.

However, the introductory scene instates not only Frédérique’s sexual power, but also her position of social dominance. In addition to her feet, the same shot allows Why to spot a 500 franc bill, a hefty donation from the rich “Venus in furs” to a poor, though aspiring, pavement artist. Money is the most important instrument of Frédérique’s power, particularly because she can hardly claim intellectual or any other type of superiority. It is her class, her social position, which allows her to assert herself as the centre of the circles she moves in. She uses money to create and solve problems, to attract people and to get rid of them. When she dismisses her two male protégés, Robègue (Henri Attal) and Riais (Dominique Zardi), they do not leave her St. Tropez villa until she pays them off. As Why starts wearing her clothes in order to look like her and, ultimately, take her place, Why also takes some of her money. This act of stealing is perfectly gratuitous; Why has no apparent need for the money, all her expenses are fully covered by Frédérique anyway.

Frédérique and Paul never do any real work in the film, although it is implied that she is a shipyard owner and he an architect. They are walking symbols of the virtual nature of class relations, being ultimately about dominating not the means of production but people. For Frédérique, life is a game; her world is one of leisure, and that inevitably leads to boredom. In fact, Frédérique goes through life by playing a series of games: she throws parties and plays poker, she takes Why to a town square in St. Tropez to play boules, dice are the omnipresent prop in her villa. When she seduces Why and then Paul, or lets herself be seduced by them, she seems to be just playing her games, fighting off the looming menace of loneliness. It is no coincidence that the film’s prologue and epilogue are situated in Paris, while the major portion of the action takes place in St. Tropez. The Riviera setting in December, devoid of social dynamics of the high season, is the epitome of idleness. It is no wonder then that there are countless scenes throughout the film of characters lying down, literally and metaphorically.

There is one highly symptomatic scene in the beginning of Les Biches, the significance of which is very easy to miss. Frédérique and Why talk to a vendor of old books and photographs. Frédérique is unable to make a difference between an original and a copy, and Chabrol pretty much leaves it at that. However, at the end of the film, after Why’s initiation into Frédérique’s world has been completed, she looks and talks exactly like the woman whose place she is taking. It is equally impossible to tell the original from the copy. Why’s innocence is erased, and with it any tangible difference between her and Frédérique. Oddly enough, that cruel initiation, the stabbing of her “mistress”, signifies an act of rebellion and the ultimate act of complacency at the same time. Why is now ready to start wearing Frédérique’s fur coat.

It is no ordinary ending, not even if one considers the standards for treatment of bisexual characters in cinema: “Films that do not portray bisexuals as psychotic killers often show them as victims instead.” (3) Chabrol gives the act of murder a much more fluid treatment, and it would be very hard to see Why as a psychotic killer, or Frédérique as a victim. Arguably, this is precisely because Les Biches is ultimately not about love, but about the passion for power-games, the only form of expression left in the world of affluence and boredom.