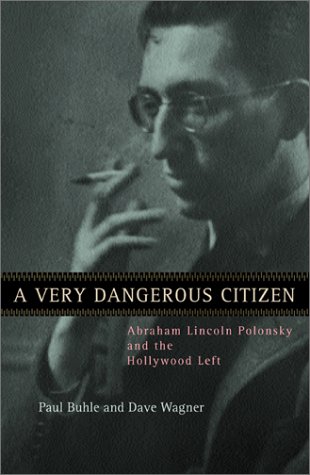 Despite the recent revival of interest in his work, Abraham Polonsky remains an unjustly neglected figure. Primarily known for his courageous stand against McCarthyism, his refusal to name names, and his subsequent blacklisting, Polonsky is often described as someone who might have stood among the major American directors had his career not been so rudely interrupted by the forces of reaction. This is true enough, but it should also be said that, for those who bother to look, everything is already magnificently there in the three films Polonsky directed: Force Of Evil (1948), Tell Them Willie Boy Is Here (1969) and Romance Of A Horse Thief (1971) – three masterpieces (at different times, each one has been my favourite Polonsky film) which, taken together, form one of the American cinema’s most significant, coherent and radical bodies of work.

The first Polonsky biography is, then, something I have awaited with eagerness and caution, both of which proved amply justified. The book’s authors, Paul Buhle and Dave Wagner, are specialists in Hollywood’s radicals (Buhle is coauthor of Tender Comrades: A Backstory Of The Hollywood Blacklist), and, as their title indicates, primarily concerned to situate Polonsky within the larger story of the Left’s struggles in America. Although this aspect of the book is riveting, I am in no position to judge its accuracy. I am, however, in a good position to judge Buhle and Wagner’s credentials as film scholars, and my fear that their historical claims may be untrustworthy is based on a discovery that their knowledge of cinema leaves much to be desired. A Very Dangerous Citizen is full of factual error and bizarre, indefensible claims: William Wyler’s These Three (1936) is described on p. 4 as “the first sympathetic lesbian film”, although the lesbian aspects of the play on which it was based had completely disappeared from the film; None But The Lonely Heart (1944) is described on p. 128 as the only film directed by Clifford Odets (What about The Story On Page One? 1960); The Southerner (1945) was written not by “William Faulkner and future blacklistee Hugo Butler” (p. 109), but rather by its director Jean Renoir after Butler had withdrawn from the project (Faulkner was nothing more than a consultant).

More annoying that these minor (and easily correctable) mistakes is the overall slapdash approach. Certain pieces of information are repeated more than once, giving the book the feel of a rough draft, while key areas of Polonsky’s career are elided to the point of abstraction. Some of this is certainly not the authors’ fault: they are clearly frustrated by Polonsky’s refusal to specify which films (aside from Odds Against Tomorrow [Robert Wise, 1959]) he worked on anonymously during the blacklist period (a secret he subsequently took with him to his grave), and wisely refrain from attempting to guess what they might have been (aside from speculating that some of them were “almost certainly” directed by Robert Aldrich, and may have starred Harry Belafonte).

But even when dealing with available facts, or matters Polonsky would presumably have been happy to discuss, the text is often alarmingly lacking in concrete information. Although there is no mention of it in the sections devoted to the ’50s and ’60s, a brief footnote in the chapter on Polonsky’s final years reveals that “Polonsky did contribute two episodes to the Canadian-made and heavily Left-influenced television series Seaway in 1955-56 (sic)”. It is not made clear whether Polonsky ‘contributed’ as writer or director (or both), but Christopher Wicking and Tise Vahimagi’s book The American Vein: Directors And Directions In Television (E.P. Dutton, 1979) notes that Polonsky wrote and directed the Seaway episode A Medal For Mirko in 1965, as well as writing two other segments. Thus Polonsky’s biographers tell us less about their subject’s sole directorial credit between 1948 and 1969 than they do about his early sexual exploits.

This confusion of purpose is especially evident in the section on Romance Of A Horse Thief, which raises far more questions than it answers. Consider the following paragraph:

When Polonsky left the project in Yugoslavia, his task was finished, as far as he knew. After his departure, however, Romance Of A Horse Thief was edited disastrously. Scenes were cut or mangled, and a confused soundtrack was thrown in, purportedly to attract a wider American audience. The film’s real weaknesses, like (Jane) Birkin’s improbably starched English accent, were made worse (p. 213).

For a biographical study with serious intentions, the level of imprecision here is truly shocking. Who was responsible for the changes described by Buhle and Wagner? Did Polonsky supervise a cut of the film in Yugoslavia which was reedited against his will, or did he simply leave the editing to others? If the former (as seems to be the case), what exactly was removed? In what way was the soundtrack ‘confused’, and how was this intended to attract a wider audience? And in what way did the soundtrack alterations worsen Birkin’s already starched accent? Over the years, I have encountered three prints of Romance Of A Horse Thief – the BBC’s transfer (93 minutes 29 seconds), a semi-bootleg UK video inexplicably retitled The Running Bear and packaged as a horror film (92 minutes 42 seconds), and a German-dubbed version (89 minutes 45 seconds) – each of which contains scenes not in the other two (the German print is the only one to include scenes involving nudity). I managed to edit these three variants together into a version running 99 minutes 42 seconds at 25 fps (approximately 104 minutes at 24 fps): Would this correspond to Polonsky’s original cut, or have the circulating prints suffered damage in addition to the initial editorial changes?

The account of Polonsky’s involvement with Mark Robson’s Avalanche Express (1979) is so garbled that one suspects the authors did not even bother watching the film, which they describe as follows: “(Robert) Shaw and (Maximillian) Schell are…intellectuals who have come to see the two sides as about the same. They likewise see themselves trapped between contending forces and consider (Lee) Marvin something of a combined politician and madman” (p. 216). All of which is complete and utter nonsense, with not even the vaguest resemblance to what appears onscreen. Nor can any of the character relationships outlined here be found in the Colin Forbes novel on which this film is based. Indeed, we can be fairly certain that Buhle and Wagner did not read the source novel, since they conclude that Robson’s film “might as well have been based on a comic book as on Colin Forbes’s novel”. In fact, even the crudest comic book writer could hardly have failed to achieve a higher level of sophistication than Colin Forbes, whose politics are suggested by the following:

It is still not generally known by the public that most terrorist organizations operating in the West are financed – and often armed – by the Soviet KGB or GRU, however indirect the links may be…For Soviet Russia the policy paid high dividends. By creating ceaseless ferment in the West it allowed Soviet propaganda to contrast conditions in the West with the ‘peace’ inside Russia, a ‘peace’ maintained by the tight police state control exercised by the vast KGB apparatus (Avalanche Express, Pan, 1977, p. 76).

Exactly why former Communist and unrepentant left-winger Abraham Polonsky was considered a suitable candidate to adapt this rubbish for the screen, and why, beyond a six figure salary, he agreed to do so (though it should be noted that he removed most of Forbes’ political material while expanding the romantic subplot), is among the mysteries one might have expected a biography to address.

For all that, A Very Dangerous Citizen contains much useful information, and is generally quite readable: the authors have obviously had access to many rare documents, and their tracing of continuing themes and concerns through Polonsky’s various books, short stories, screenplays and even film criticism is carried out in a manner that is often skillful and perceptive. One only regrets that their book’s scholarly deficiencies render it so unreliable.