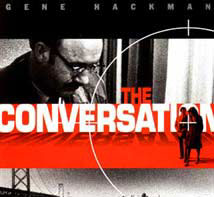 An often neglected aspect in discussions of America in the 1970s is the shift in corporate identity. No longer were businesses merely commercial entities – they began to be individualized. Brands and the corporations behind them started to take on aspects of personality, the marketing ever more sophisticated. Sharing a Coke and wearing Levi’s jeans became more than just soda and dungarees: it was a way of life, a corporate dogma. And the corporation as grand manipulator is at the very center of The Conversation.

Two immediately previous American films dealt with conspiracy and corruption – engagingly, in Serpico (Sidney Lumet, 1973) and dully, in Executive Action (Raymond Miller, 1973). These concerns were in the air at the time, the country still reeling from the assassinations of John F. and Robert Kennedy, Martin Luther King, Malcolm X, and the many student demonstrations that resulted in violence and fatalities (Kent State University and the 1968 Chicago Democratic convention, to name only two). But unlike the earlier films, The Conversation implied this tension but also related it to the faceless menace of unspecified corporate control. The primary juxtaposition is between surveillance expert Harry Caul (Gene Hackman), whom the viewer comes to know very well in the course of the film, and his corporate client, represented by the Director (Robert Duvall) and his assistant, Martin Stett (Harrison Ford) about whom Harry can discover nothing at all. Even the building bears no logo, no clue as to the business.

Coppola uses the Embarcadero Center in San Francisco to great effect, capitalizing on its vaguely fascistic architecture (dizzying black-and-white tiled walkways with large concrete walls and huge windows with views of the San Francisco Bay that intimidate rather than delight). Roaming the polished halls, Harry seems marooned, the corporation a kind of fiefdom (there are even plainclothes guards with whom he tangles). A principle of all good horror movies is to keep the monster invisible for as long as possible; the horror in The Conversation remains unnamed and undefined, its power apparently vast and insidious. Harry is hired by the Director of the anonymous corporation to tail a couple, a difficult assignment that involves recording their conversation outdoors. Unable to hear one exchange, Harry refines the technology until he realizes he’s overhearing a possible murder plot. Haunted by an earlier case that led to several deaths, Harry worries about the consequences of this assignment. Although he does nothing to warn the possible victims, he witnesses the killing. Harry knows only what happened and that he played a part, that in effect, he served the ends of the corporation through his work. Aware that he’s a liability, members of the corporation have bugged his allegedly impenetrable apartment. By the conclusion, Harry’s highly organized and vehemently private life lies in a shambles. In the last scenes, his living room resembles a gutted machine; he’s left only his saxophone and himself intact.

The film plays with the frustration of indistinct voices and blurred faces (Harry’s most often), establishing a nagging sense of peril throughout. Even the score teases, anything recognizable only heard in snatches and the piano theme almost like a child’s finger exercise. At the beginning, voices emerge as the camera moves from an aerial shot of Union Square (it could be the view of a bomber) to ground level. A mime annoys Harry by imitating him – drawing attention to himself, the last thing he wants. Everything about Harry is non-descript and practical: his generic glasses, his inexpensive suit and shoes, bargain watch and opaque plastic raincoat. (His signet ring and his moustache the only evidence of personal vanity.) Anonymity and ruthlessness is necessary to his work (as it is for the most nefarious corporate purposes: in many ways, the worst of Harry embodies exactly what he’s up against). The various times his face is blurred are echoes of the scene in which he makes a long-overdue confession of his refusal to take responsibility for what he witnesses. Not to push this too far, but The Conversation does have overtones of push-button warfare; after all, technology not only facilitates surveillance but also long-distance annihilation.

Everything about Harry is marginal, peripheral to political, commercial or social systems. His cheap clothes are matched by his determinedly impersonal dwelling (only his saxophone and statue of the Virgin Mary reveal him in any way). The decor self-consciously bland and unrevealing, though it’s clear no one else ever comes there. But paranoia and expectation of observation determine his life. His mistress, Amy (Terri Garr), lives in a dingy ground-floor apartment and appears to spend much of the day in bed. His only other socializing is at the wiretappers convention; conventions, an American institution, are defined by give-aways and hucksterism. (When Harry pronounces a rival’s phone wire “junk” you feel he’s condemning the whole show.) The sequence culminates in the after-party, revealing both Harry’s competitiveness (his pride in his work) and his vulnerability (his pique when he realizes he’s been bugged as a joke).

He is the consummate outsider, exterior to human life, disconnected almost at the level of a machine; his flawless rigor about his work slightly reminiscent of the on-board computer Hal in 2001: A Space Odyssey (Stanley Kubrick, 1968). One of the most telling moments in the film is when Harry discovers that his one-night stand has absconded with the tapes; his nasty, plosive “bitch” chilling. Hackman plays Caul with such meticulousness and precision (as Harry himself is meticulous and precise), that he manages to express the character’s imminent breakdown with this single word.

It’s also childish; much about Harry is. (Peter Cowie makes the apposite observation that his raincoat could represent the amniotic shroud that shields the newborn (1)). The very act of eavesdropping and spying has about it something childish; it’s what children do to figure out how to be adults. Harry’s final bugging of the couple’s hotel room resembles a primal scene; he tries to shrink himself – huddling fetus-like under the bathroom sink, directly next to the toilet – just as a child would. His response to the screams that he hears from the adjacent room are also childish: he tears the room apart, finally turning on the television to block out what he can no longer deny. When he breaks into the murder-scene room, he finds it preternaturally clean, right down to the proof-of-sanitizing paper belt on the toilet. (In one of many nods to Hitchcock, Coppola plays with audience expectation, showing the shower clean when Harry snatches back the curtain, the water clear as it runs down the drain.) Turning to the toilet, Harry hesitates but finally can’t resist lifting the seat and engaging the flush. The unforgettable and deeply disturbing flood of blood and towels abortive, less like a murder scene than a cinematic miscarriage.

In many ways, Harry has tried to make himself a part of his machines; he’s very proud of building all his equipment himself, of keeping his nose out of his clients’ business. “I don’t care what they’re talking about”, he tells his curious assistant. “All I want is a nice fat recording.” Although he remains separate from his social connections, his lapsed Catholicism clearly troubles him.

The solution to the mystery of the film rests on an aspect dependent on human interpretation: the key phrase changes its meaning with different inflections. In this way, the eavesdropper is more than a mere conduit; with little fanfare and with great subtlety, The Coversation manages to question at what point one must take responsibility for one’s actions.

The go-for-broke collaboration between Coppola and Hackman results in a devastating character study. Hackman never tries to make Harry likable and the film is the better for it; helpless and unravelled, he emerges a full individual, his final scenes a kind of triumph over the nameless people who have managed to infiltrate his mind but not his soul. By daring to opt for ambiguity over pat solutions, for a protagonist both mercenary and sympathetic, Coppola fashioned one of the enduring masterworks of American cinema.