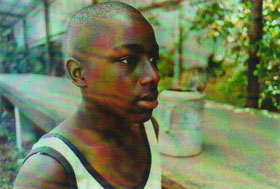 “Artistic identity has no home, it is nomadic. Everything is a journey, especially in cinema. But I’m not simply speaking of the concrete, geographic aspect of a journey. I’m also speaking about ideas, identity, feelings, relationships. We should travel everyday of our lives,” remarked director Athina Tsangari, one of the participants in this year’s Thessaloniki International Film Festival, which is held annually in Greece’s second largest city.

Alternative views and exchanges on cinema are nothing new in Thessaloniki. The Festival has staked its reputation on promoting unconventional, innovative works by mostly young, independent directors (the Festival’s international competition section is open to first and second features only). During its ten-day run in mid-November, the Festival screened over 160 films from more than 35 countries, including a large concentration of works by Balkan directors, many of whom are unknown outside the region. Thousands of viewers packed the Festival’s six venues to see an eclectic mix of films ranging from queer cinema and experimental shorts to Austrian indies and angst-ridden parables from Russia.

Acknowledged as the most significant cinema event in Greece, and something of a haven for cinephiles worldwide, the Festival aspires to “seek out, discover, and promote the critical dimensions [that] define or will define the cinema of today and the cinema of tomorrow,” says Festival director Michel Demopoulos. To this end, Demopoulos has fashioned Thessaloniki into something of a bulwark against what he sees as the ever-expanding homogeneity and “monotonous nature of films offered to the public.”

This commitment to presenting unorthodox films is nowhere more apparent than in the Festival’s New Horizons section, created and programmed by Dimitri Eipides. Through his dedicated efforts to seek out films that are “marked by their originality, and even risqué,” the works of such original and thought-provoking filmmakers as Aleksander Sokurov, Lea Pool, Charles Burnett, Florian Flicker, and Rosa von Praunheim have been introduced to Greek audiences.

One of the prominent themes running through several of this year’s films concerned displacement and transition, exploring how individuals respond to a rootless existence. Among the highlights was The Last Resort (Pavel Pawlikowski, 2000), an affecting portrait of a young Russian woman who arrives in Britain’s Stansted airport with her son expecting to be met by her English fiancée. 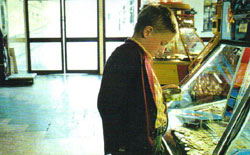 When the fiancée doesn’t appear and she is threatened with deportation, Tanya, in a panic, claims political asylum. Swallowed up by the immigration bureaucracy, she and her son are sent to the moribund seaside town of Stonehaven, a soulless holding area for refugees. There she is befriended by Alfie, an amusement arcade manager, who ultimately restores her faith in humanity.

Understated and unsentimental, the film portrays the misery and uncertainty that refugees face without stripping them of their dignity. Hand-held, fluid camerawork deftly captures the desolate concrete hell that is Stonehaven and underscores Pawlikowski’s documentary background. Naturalistic performances and the director’s astute portrayal of the hardships and pleasures of ordinary life imbue the work with tenderness. The Last Resort won the Golden Alexander for best film in the international competition section and its two leads, Paddy Considine and Dina Korzun, won the awards for best actor and best actress.

Melding the political and the personal, the Iranian films, The Day I Became a Woman (Marziyeh Meshkini, 2000) and The Circle (Jafar Panahi, 2000), depict women struggling to free themselves from the social constraints and moral burdens placed upon them in a strict Islamic society. Woman is divided into three vignettes. The first episode opens with a girl on her ninth birthday. Hava wants to go out and play with her childhood friends, but her mother and grandmother tell her it is no longer possible. Turning nine means she is now a woman, and leaving the house to play with boys would be a sin. In the next sequence, we see a girls’ cycling race. Young women, their dark veils flapping in the breeze like ships’ sails, are swiftly pedaling along a winding desert road. Suddenly, the girl leading the pack is being hounded by male relatives on horseback, who are galloping alongside her. They threaten to throw her out of the house if she doesn’t stop this fiendish recreation. But the girl refuses to quit the race. The final story portrays an old woman, confined to a wheelchair, who enlists the help of some young children to take her shopping. Once inside a sumptuous mall, she proceeds to buy the material goods she has always wanted, such as a dishwasher, a television, and an iron.

Gracefully and with a touch of irony, Meshkini (who won the festival’s award for best director) presents how Iran’s theocracy deforms the natural desires of its female citizens by slowly stripping them of their freedom at each stage of life. When we see Hava’s incomprehension at being draped in a black veil – which she constantly pulls at because it hangs so awkwardly on her small frame – we recognize that it is only the beginning of the enormous restrictions she will be forced to live under. Despite the obstacles, however, Meshkini remains hopeful that changes are underway in Iran, stating at her press conference, “I view the women in the film, particularly in the second story, like a rushing river. Their aim may not be very clear at the moment, but they cannot be turned back.”

In contrast to Meshkini’s allegorical style, Panahi’s The Circle is a neorealist look at the underside of Iranian society. Dealing with the taboo subjects of women in prison, abortion, and prostitution, The Circle forcefully illustrates what happens to women who stray far from their socially imposed boundaries. The film cuts back and forth between a group of women released from prison, a young mother who abandons her daughter, and an unmarried woman desperately seeking an abortion. Completely at odds with their world, the women run in “circles” attempting to find solutions to their problems. In spite of their efforts and unflagging hope, there is no relief in sight.

Getting permission to shoot the film lead Panahi through his own circles of hell. It took years of pressure from colleagues and from the Iranian independent press before the censors relented and granted him authorization for production. His having been awarded film prizes abroad – The White Balloon received the Camera d’Or at Cannes – also helped. Another struggle ensued to exhibit the film after it was completed. The censors eventually allowed The Circle to be screened at this year’s Venice Film Festival, where it won the Golden Lion. Working under severe restrictions has become the norm for Iranian artists, noted Panahi, “When you live in a circle, eventually you learn how to get out of it.” 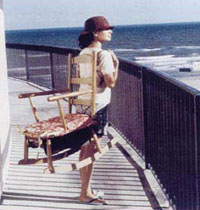 In an experimental vein, The Slow Business of Going (Athina Tsangari, 2000) is a fanciful essay about the endless search for a homeland. Petra Going, a young Greek-Mexican woman, is an agent for the Global Nomad Project. She wanders the earth recording remnants of memories, nostalgic thoughts, and ideas of belonging. Her hotel room becomes the locus of any and all manner of theater, from tango lessons and gun smuggling tutorials to martial arts workshops.

Using standard avant-garde techniques, such as self-reflective voiceover, jumpcuts, repetition, and hand-held camera work, Tsangari attempts to shed light on the fluid relations between place, self, and meaning. Shot over a five year period, the film at times has an episodic, disjointed quality reflecting the start and stop nature of its production history.

Displaying visual poetics of enormous power, Moloch (Aleksandr Sokurov, 1999) is a complex allegory about redemption. The film focuses on a single day in the lives of Adolph Hitler and his mistress Eva Braun while they stayed at the Fuhrer’s Alpine retreat in Berchtesgaden during the late spring of 1942, a few months before the German defeat at Stalingrad. Employing parody as a method of visualizing the “banality of evil,” Sokurov presents us with images of Nazis as neurotic, petit bourgeoisie. This humanizing of evil through caricature prompts the audience to confront the idea of salvation for those who perpetrate horrific crimes. During Moloch‘s screening at Cannes in 1999 – where it received a mostly negative reception despite its award for best screenplay – Sokurov stated that Eva was the character that troubled him the most, “For a Christian, it’s through love that one finds the essence of salvation, but can one save one’s soul by loving a monster?”

Other notable festival screenings included The Punishment (Goran Rebic, 2000), a piercing documentary voyage through Belgrade after the NATO bombardment; George Washington (David Gordon Green, 2000), an imaginative exploration of the lives of a group of mostly black kids in a small southern town; Dead End Streets (Stavros Ioannou, 2000), a heartfelt story about Kurdish refugees living on the streets of Athens; I Like Hearts Like Mine (George Zervas, 2000), a delightful portrait of the legendary rebetiko musician Markos Vamvakaris; and Khroustaliov, My Car! (Alexi German, 1998), a highly charged phantasmagorical romp through the last days of Stalin.

Emphasizing as it does the artistic rather than the commercial side of filmmaking, the Thessaloniki festival transpires in an ambiance of openness and hospitality. Organizers go to great lengths to accommodate the needs of filmmakers and journalists, including providing airfare and hotel rooms for most of the invited attendees and a press room furnished with computers, phones, faxes, e-mail access and individual mail boxes, which are stuffed daily with press releases and schedule information. There is also a video screening room, just in case you miss a film and want to catch it on tape. Additionally, the lovely port city of Thessaloniki, with its university, Byzantine churches and ruins, cafe-lined waterfront, wide plazas and youthful energy, is a great place to spend time and watch films.

Berlin or Cannes it is not. But for cinema lovers with an adventurous spirit and an eye for edgy, even combative films, Thessaloniki may be just the festival you’re looking for.