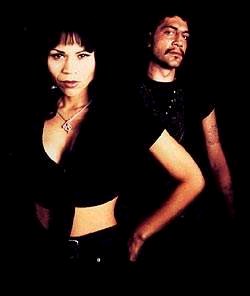 UK writer, Brad Stevens, examines the variant versions of the film Perdita Durango – in particular, the omissions in each “cut”. This type of analysis raises an important area of film criticism too often overlooked – the acknowledgement that a film is often released in different versions and the analysis and comparison of each version. -eds.

One might begin with a truism: there can be no responsible (or even irresponsible) film criticism unless the primary object – the cinematic text itself – is available for study. Yet this apparently simple demand is seldom met: worse, the information that would enable one to evaluate a print or video transfer is frequently not available. Critical misunderstandings are inevitable in this context – witness Ernest Lindgren’s heated argument with Vsevolod Pudovkin about the latter’s Mother (1926), a disagreement that arose simply because the historian and the director were discussing two differently edited versions. Even a classic such as Bernardo Bertolucci’s The Conformist (1969) continues to circulate in at least three variants. The following notes on Alex de la Iglesia’s Perdita Durango (1997) are, then, presented here not simply for their intrinsic value, but as a case study, an example of the debris that must so often be cleared away before the critic’s real work can begin.

Perdita Durango, despite being made (mostly) in English, is a Spanish film shot in 1997. It was released on video in Spain with a 25 fps running time of 124 minutes 31 seconds: although this is the longest version available, it cannot be described as definitive, since it is missing footage from one sequence and is dubbed into Spanish. The version released on video in Australia is described by its proud distributor as ‘uncensored’, since the official censor board did not ask for any cuts. However, it seems that a truncated international release print, already missing 6 minutes of footage, was submitted for certification. Thus the supposedly uncut Australian video lasts a mere 118 minutes 55 seconds at 25 fps, and is missing the following:

– 16m 31s. Another section from the ceremony in which Romeo cuts up a corpse, drains its blood into a bowl, drinks the blood, then spits it into the audience.

– 44m 14s. The entire section in which Romeo tells Duane (Harley Cross) the story of Christ, complete with flashbacks to the crucifixion.

– 67m 59s. The first appearance of Doyle (Alex Cox), originally introduced picking up a foetus from the highway.

– 85m 57s. Marcello Santos’ meeting with Reggie has been cut in its entirety. Santos is first seen in close-up; as the camera pulls back, we see that he is being given oral sex by a very young girl; Santos strikes the girl across the face, then wags his finger at her while saying “you were bad”; Reggie enters and the following dialogue ensues:

Santos: “Reggie, my friend, come in, sit down. You know why I called?”
Reggie: “I think so.”
Santos: “You have a problem with it? (Reggie shakes his head) Good. I know he’s your cousin and the two of you were raised together as young boys.”
Reggie: “Well, it’s been a long time since he left.”
Santos: “Personally, I have no problem with him. But he’s committed several heinous crimes. Even the Mexican authorities want to put a stop to his activities.”
By cutting this scene, the Australian edition loses a number of important plot points.

The version released on tape in England is identical to the Australian one, but with an additional 37 seconds removed (mostly from the rape sequence) by the British Board of Film Classification (BBFC). In America, the film was released on tape by A-Pix Entertainment under the title Dance With The Devil in both an R-rated edition missing 10 minutes of sex and violence, and an “uncut”, “unrated” edition which turns out to be even worse than the Australian tape! This variant, which is also available on DVD, has a running time of 121 minutes 8 seconds at 25 fps (it appears to have been transferred from a PAL source). Although it contains much of the material missing from the Australian cassette, a number of new cuts, totalling almost 4 minutes, have been made, partly for censorship reasons, but mostly because A-Pix were unwilling to pay for the use of certain copyrighted materials. The cuts are as follows:

– 25 seconds in. The shot of a tiger pulling away Perdita’s bedsheet has been shortened, eliminating some nudity.

– 29s. A shot of Perdita has been shortened in order to remove a glimpse of her breasts.

– The original, strikingly designed main title, in which a foetus appears inside the last letter of the word Durango, has been replaced with a crude video generated title.

– 20m 50s. At the beginning of the sequence introducing Estelle’s parents, close-ups of a TV screen showing The Mary Tyler Moore Show have been removed (though this series is still mentioned in the end credits). Later on in this scene (at 22m 14s), just before Estelle enters the room, another Mary Tyler Moore Show clip has been cut.

– 52m 47s and 52m 50s. Two cuts have been made to the sequence in which Romeo and Perdita make love in the desert, eliminating shots of Romeo kissing Perdita’s breasts and removing her trousers.

– 76m 1s, 76m 3s and 76m 12s. Three cuts have been made to the flashback showing Romeo as a child watching Vera Cruz (1954). The clips from Robert Aldrich’s film have been cut to a bare minimum, though not entirely removed, which would seem to render the deletions (including a very beautiful shot wherein the camera tracks around and behind the outdoor screen) totally pointless from a legal standpoint.

– 88m 16s. Santos’ meeting with Reggie has been differently edited in practically every version: according to critic Shade Rupe, a full-screen, English-language, Spanish subtitled bootleg cassette included the footage of Santos striking the little girl who had just performed oral sex on him; the currently available Spanish video cuts this footage, beginning the scene with a shot of Santos wagging his finger at the girl and saying “you were bad”; the American DVD eliminates this shot, beginning the sequence as Reggie enters the room (as previously noted, the Australian tape cuts this section in its entirety).

– 101m 8s. A close-up of a TV screen showing Urotsukidoji Ii (Legend Of The Demon Womb) has been removed from the start of the scene in which Romeo arrives at his friends’ house (though this Manga is still prominently listed in the credits). Most of this footage, which depicts a woman being ‘raped’ by phallic tentacles, was also cut from the UK cassette by the BBFC.

– 107m 19s. The first few shots of the sequence in which Perdita frees Duane and Estelle have been cut. These showed Perdita watching Urotsukidoji Ii before using a remote control to turn the television off.

– 114m 36s. The last, and certainly cruellest, cut (which totals 40 seconds) involves the death of Romeo. In the Spanish, Australian and British versions, Reggie shoots Romeo in a warehouse and is himself shot by Perdita, who runs out when she hears an explosion. As Dumas (James Gandolfini) and Doyle enter, Romeo imagines himself in the final scene of Vera Cruz, and the image alters so that Dumas becomes Gary Cooper while Romeo substitutes for the dying Burt Lancaster. But the American edition removes all this footage from Vera Cruz, cutting directly from the cops’ noisy entrance to Dumas standing over Romeo’s corpse. Thus what is probably the film’s finest moment has been lost to US viewers.

It is worth noting that the American and Spanish variants both end in the same way: a shot of Perdita walking through Las Vegas freezes, then fades before the credits roll in Spanish over a black screen. But the Australian tape (like the British one) has a slightly different, somewhat superior climax: there, the shot of Perdita freezes and the credits begin to roll in English over this still-frame, which then dissolves to several shots showing Las Vegas facades seen from the perspective of a moving car.