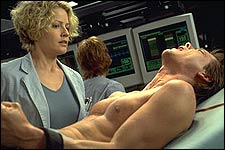 “What would you do if you were invisible?” This is not a question posed by Paul Verhoeven in his latest film, Hollow Man. Rather, it is a question he is more inclined to answer in order to tell you what he would do if he were invisible. Well, maybe what he would be tempted to do. How far he implicates the audience’s temptations is debatable. It’s not as simple a matter as saying that Verhoeven has rapist fantasies on the basis that his central character takes his voyeurism one step too far. The fine line between being a naughty voyeur and killer rapist is barely articulated as Sebastian Caine, played by Kevin Bacon, rampages through the fantastic possibilities posed in this latest morality play on the invisible man scenario.

As with so many Verhoeven films, Hollow Man‘s story is well under way when Sebastian Cain, a young genius scientist leading a research team funded by the American military, discovers the secret of reversing an invisibility process, which they have already discovered. They have been experimenting on animals, which the military presumably intends for some sort of weapons development. One character actually asks if the invisibility is in worse hands with Sebastian than it would be in the hands of the government, a point that is not played up by Verhoeven, especially when the general in charge of the research project is murdered. Hardly the dupes of government manipulation, this is a divisive group riddled with vanity and narcissism, prone to displaying and extolling their imagined genius, and bemoaning their failings in the face of Sebastian’s undoubted abilities. Elizabeth Shue plays Linda, Sebastian’s ex-girlfriend, torn between her admiration for Sebastian, her own ambition, and her desire for a normal relationship with her new boyfriend, Matt (Josh Brolin). Right from the start Matt, who is also part of the team, is painted as the all-too-good guy, and it’s almost a wonder that he doesn’t die (1). He’s the saintly double to Sebastian’s evil angel, and the salvation that Linda discovers in his arms indicates that it is their relationship that provides the moral counterpoint to Sebastian’s sordid behaviour.

Brolin’s is a wonderfully nuanced and subtle cardboard performance that Verhoeven has so consistently favoured in his science-fiction films, reaching its peak in the sublime casting of Starship Troopers (1997) (2). He is more interested in character-types than in performance, articulating an ironic distance to the dramatic conventions of character construction. The first glimpse of the two main characters in Starship Troopers is actually a graphic outline when Johnny (Caspar Van Diem) designs a computer animation to send to Carmen’s (Denise Richards) computer. It is a simple animation of Johnny kissing Carmen, which Verhoeven uses to illustrate the archetype and the illusion of a three-dimensional character. In Verhoeven’s films there is text, subtext, and deconstruction, which is always a popular tool of an ironist. And perhaps, beyond a cathartic reaction to his own personal experiences in Nazi-occupied Amsterdam as a child, the explicitness of the violence and gore in his films seeks to draw attention to the way audiences predictably respond to a characters’ fate. It is not an ambivalent distance, rather than a simple acknowledgement that they are only characters on a screen, which does not deny that he still likes his characters. The extraordinarily graphic slaughter of Peter Weller in Robocop (1987) is a testament to Verhoeven’s skill at eliciting a sympathetic reaction to a sketchily drawn character at the beginning of that film. It could be that the explicitness of violence in his films offers some sort of perverse examination of what can be found inside a person, and that perhaps there is only blood and organs. A person’s character can not be found within their anatomy: the erasure of Sebastian’s body in Hollow Man draws attention to the evil potential of his character.

If you’ve seen Kevin Bacon in Wild Things (John McNaughton, 1998) then you’ve already seen his penis. He seems quite proud of it, and perhaps in an effort to follow in Harvey Keitel’s footsteps it’s on display here as well. It appears in seemingly strategic glimpses designed to suggest that it just popped out unexpectedly. The first scene in which it is present, but not seen by the audience, Sebastian takes off his robe in front of both Linda and Sarah (Kim Dickens), the veterinarian, before getting on the operating table. Both women share a smug look, to which Sebastian, in spite of his obvious exhibitionism, gently chides their lack of professionalism: “Ladies. please. This is science.” Not surprisingly the audience responds in a snickering fashion similar to the female characters when it is seen a few scenes later. As Sebastian sneaks around the lab after becoming invisible it becomes necessary for another character to don a pair of thermal goggles to reveal the trickster hiding from the team behind some equipment. As he steps from his concealment in a thermal rendering of primary colours one detail is obvious, and I guarantee that no one can remember the next line of dialogue or even who spoke it. It is amusing to note that after Sebastian has stripped off for the pleasure of the ladies he is discreetly covered up on the operating table. But the invisibility process proves unexpectedly painful, and in his throes of agony the dignifying sheet finds itself on the floor. Sebastian’s painful contortions position him conveniently, because naked men are always posed awkwardly to hide what is traditionally symbolic. But as his body disappears layer by layer, as we know it will be, his penis raises its even uglier head: like the rest of his body it is a bloody looking piece of meat, and barely recognisable without its skin. It’s as if male nudity is acceptable if portrayed in a medical context, as opposed to an erotic one. Where Bacon’s nudity seems gratuitous in Wild Things, in Hollow Man it points to a conservatism in our culture where it is hard to take a penis seriously (3). Verhoeven plays this game of hide and seek, drawing attention to traditional methods of concealment, and surprising the audience with a sudden revelation when it is not expected. By conspicuously concealing Sebastian’s nudity at one moment, he is able to shock with an equally conspicuous display.

Verhoeven is a director renown for his visual style, considered glossy and even baroque, especially in films such as Basic Instinct (1992) and Showgirls (1995), yet there seems to be more. In his science-fiction films there is a tendency towards a stripped down, bare-essentials approach to the photography and lighting effects in his very detailed mise en scène. He doesn’t go in for the cliché of the grungy distopic future as might be found in Alien (and its sequels and a host of visual imitators), or the clinically sterile whites of 2001 (which has even more imitators). Robocop, Starship Troopers, and now Hollow Man all seem to share a lack of anything resembling an “atmospheric aesthetic” considered mandatory in the genre. Instead, mise en scène is always dictated by the narrative, as if there were no visual subtext. In Verhoeven’s future there is a refreshing lack of expressionist lighting and out-of-sight smoke machines. But I admit that what this all means is actually beyond me. Perhaps it is as simple as reducing the artifice of dramatic conventions by limiting an evocative mise en scène, as I’ve suggested with his choice of actors and the style of performance he commands. Or perhaps it is merely that Verhoeven doesn’t feel the need for a visual aesthetic with a thematic undertone (4).

As Sebastian’s theory is tested on an already invisible gorilla, an essential flaw of this film comes to the fore. The special effects team for this film have created something truly extraordinary in making a body disappear and reappear, layer by grotesque layer. And yet this amazing trick is dramatically wasted when it is first seen as the scientists bring the gorilla back. Later in the film when Sebastian volunteers himself as the first human subject, the visceral impact of this special effect on the audience is significantly lost. This is an opportunity that Verhoeven fails to exploit in gaining audience sympathy for a flawed character. It is the far weaker option to have a bad character get even worse. The dramatic predictability is clumsy to say the least, and it raises the question (in my mind) of whether Verhoeven, or perhaps others involved in the production, took a timid step backwards. It certainly dilutes Verhoeven’s polemic that the gift of invisibility would necessarily bring out the worst of human traits. At the start of the film it is mentioned that the invisible gorilla has begun to exhibit a radical increase in aggression (information the audience is already privy too as the opening scene so graphically demonstrates). And during a climatic confrontation, Matt asks Sebastian if it was the drug that has affected him or the power. The implication still goes that Sebastian is really only a naughty boy poisoned by the ill-effects of the drug that made him invisible, and not by the opportunities offered in Plato’s moral proposition. There is no answer to this question, especially when he’s busy trying to kill Matt, and it is a point where Verhoeven is less ambiguous than he is inconclusive.

The negative critical response to this latest film from Verhoeven raises the question of what is to be expected from a director with a strong personality and consistent thematic orientations. There is the problem of pigeon-holing a director, and then attacking when those expectations are not met, as was the case with the less-than-enthusiastic (not to mention thoughtless) response to Eyes Wide Shut (Stanley Kubrick, 1999). And of course there is the predictable reaction when a director presumes to articulate a seemingly misanthropic thematic. Verhoeven can easily be placed alongside Stanley Kubrick, Brian De Palma, and Robert Altman (amongst others) as a director that can see the worst humanity has to offer, and uses it in a juxtaposition with heroism, redemption, and introspection in an ambivalent response to the simplistic Christian humanism that dominates western cinema. But because sex, violence, and explicit gore are so prevalent in his work it tends to overwhelm all perceptions, and it is easy to become blind to a greater level of meaning. However, I think it’s too great a leap to suggest that Verhoeven is so misanthropic that he believes in only the worst of humanity. You can’t celebrate the good without acknowledging the bad. And there are enough heroes and good guys in Verhoeven’s films to suggest that redemptive possibilities are always co-existent with the worst.