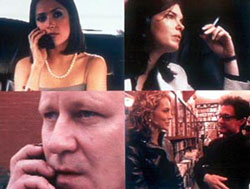 Mike Figgis’ new film deserves a certain degree of skepticism if only for its self proclaimed ‘revolutionary’ approach to cinema and for its radical posturing. In several statements concerning the production of Time Code Figgis has deliberately placed himself on the frontline, comparing the film’s energy and ideals to the punk movement and stating that he encouraged a certain degree of anarchy in the filmmaking process solely because “anarchy begets art”. Certainly, the film does introduce a new viewing experience to mainstream cinemas but for the most part, while this is an intriguing viewing experience, it is hardly the revolution and, if it is, it is a polished and somewhat superficial one.

The main achievement of Time Code is its means of production. The film was shot simultaneously in one continuous take on four separate Sony DSR-1 digital cameras, each following a host of characters entwined within a tightly choreographed story. The result is one story recorded from four different points of view. The final film is a four-way split screen with each camera dividing the viewer’s attention. What results is an interesting visual and story telling device whereby the audience is able to see where a character has come from, where they are going, who they are deceiving and who is deceiving them, from a number of different angles. To avoid a noisy soup of dialogue Figgis has chosen to steer the audience’s attention by controlling the audio of the different quarters. The viewer can choose to follow one track, or glance from screen to screen with the competing view points in their peripheral vision at all times. Following Figgis’ lead it is relatively smooth viewing to be guided from one screen to another as the audio is raised or lowered in the sound mix.

In this sense, Time Code is an interesting formal experiment. Unfortunately, it seems hesitant to really explore the potential of this device and, instead, creates a narrative tangle that, for the most part, serves only to highlight the skill of the camera operators (Figgis among them).

The plot centres on the Red Mullet film production company on Sunset Boulevard. Of course, it’s no accident that this is Figgis’ own production company and this is only the first of many self-referential in-jokes. Red Mullet is headed by the drunken, self-destructive Alex (Stellan Skarsgård) who has been cheating on his wife Emma (Saffron Burrows). He is distraught, however, when, after a meeting with her psychiatrist in the opening moments of the film, Emma leaves him. Alex is surrounded in the office by an ensemble of producers, directors and film folks played by a range of considerable actors, Holly Hunter and Richard Edson among them, in relatively unrewarding roles. Julian Sands, who is so often cast in heavy-handed roles, is afforded here a very amusing role as a dopey new age masseur who is in the office from scene to scene massaging the toes, ears, scalps and shoulders of whoever will stay still for long enough. His naturally stilted physicality and speech are brilliantly used by Figgis and played off by the other actors.

Into the fray enter the lovers Rose (Salma Hayek) and Lauren (Jeanne Tripplehorn), a thoroughly unbelievable wealthy and treacherous couple whose quarrelling has dominated one screen from the opening of the film. Lauren rightly suspects Rose of deceiving her and follows her to an audition at the Red Mullet offices. Lauren then places a hidden microphone in Rose’s handbag and spies on her, following the unraveling of events from inside her limousine. From this point on, the character of Lauren becomes significant because she forms an on-screen articulation of Figgis’ exercise in multiple viewpoints and voyeurism and, to a certain degree, she becomes emblematic of the audience’s active eye. At the same time as she sits brooding while listening to the sounds of Rose having sex with Alex on her headphones, we are able to watch the other characters come and go from the Red Mullet offices through the windows of her car. So in a sense, Lauren becomes the unknowing conduit for the passage of action. Fittingly, she is passive throughout the film until she finally descends into violence, rupturing the comedic revolving door antics of the other characters. When the drama does begin to accelerate, unfortunately, the film’s tendency toward self-consciousness only serves to lessen the impact by having three screens working through wry, conceited nods to the film’s manufacture while the fourth struggles heavy handedly with genuine drama.

The climax of the film coincides with the pinnacle of Figgis’ dry irony when in the final stages of Timecode a young director arrives in the office to pitch a film. The pitch, delivered among a multitude of intellectual clichés and piss-takes, is identical in concept to Time Code and Alex laughs in the director’s face and says that it is the most ‘pretentious crap’ he has ever heard of. I was left wondering why, if he believes his attempt to be truly radical, Figgis would make his ideas the butt of his own jokes. It is hard to rally around a revolution whose leaders don’t have faith in their cause.

Figgis’ past cinematic output has been erratic in content and quality, and, for the most part, his best known works have been the smoothly crafted dramas produced on the borders of the studio system. Films such as The Browning Version (1994) and Mr Jones (1993) were generally well received but it was the success of Leaving Las Vegas (1995) that allowed Figgis the creative freedom he now enjoys. Memorable for its performances and the down-beat narrative woven around a man intent on drinking himself to death, the film seemed more interested in its own daring than the bleak fate of the characters. And this is a trait that has plagued Figgis since. A number of his recent films seem entranced with the notion that they are challenging mainstream conventions but never quite succeed in transcending those conventions. In The Loss of Sexual Innocence (1999), for example, Figgis created a work that was too interested in its own obtuseness and ‘film-art’ stance to lower itself to the level of conveying anything meaningful or cogent to the audience. For this, it was absurd, appallingly acted and full of pretence. Time Code is certainly streets ahead and has much more that is recommendable, but it also contains this undercurrent of weighty self-absorption.

Time Code has claimed to be the first film shot in real time in one take, to be truly interactive, and to present four different concurrent stories filmed simultaneously. Yet, interestingly, an almost identical project, D-Dag (2000), was made on New Year’s Eve in Copenhagen by the ‘Dogme Brothers’, Lars Von Trier, Thomas Vinterberg, Søren Kragh-Jacobsen and Kristian Levring. In this case, four cameras directed by each of the four directors followed four different characters in the minutes leading up to New Year’s Eve and then on into the new millennium. In an extraordinary coup, however, the filmmakers convinced seven Danish television networks to devote their prime time programming to the film on the evening of New Year’s Day. This meant that each camera was played out on one of the four channels which viewers could switch from and to with their remote control, choosing their own editing points and following their own paths in the intertwining narrative. The fifth channel showed all four simultaneously on a quadruple-split screen in a format similar to Time Code, and the sixth and seventh channels made the process transparent by showing the directors in a central control room monitoring the action and communicating with the actors and cameramen. This comparison is not meant to undermine the significant achievements of the makers of Time Code but rather to illuminate that novelty alone is not enough to make a film ‘revolutionary’. What Figgis has achieved in Time Code is important in that it introduces a new mode of viewing to the conventional cinema experience. Unfortunately, in this case, innovation has not been employed to enhance the scope of cinematic potential but rather for innovation’s sake and in praise of the technology alone. For this reason, the project disappoints. As is, Time Code is an interesting exercise, a flexing of muscles for directors and performers with their tongues in cheek and their emotional investments reserved.

The lightness that is the gift of working in a liberated, improvisational environment has succeeded in creating a seductive tone to the film’s performances that ultimately makes Time Code easy viewing. And the quadraphonic assemblages of images are often very beautiful. In particular, moments of coordinated movement, or moments when each screen lingers in close-up on the performances, are captivating, and there is a certain thrill to seeing Stellan Skarsgård or Jeanne Tripplehorn wander from one frame into another, only to appear in the background of a third. This fragmented perspective may work to distance the viewer from the characters and the narrative but it almost dances the audience into involvement. The multiple screens create a constant viewing activity, eyes darting from screen to screen, looking for the next piece of action to carry our interest forward.

And this ultimately is why Time Code will work for many people. A critique of the performances, narrative or representation is not particularly meaningful because they are merely the hooks upon which Figgis hangs his coat of technical wizardry. It is clear that Figgis did not have a huge investment in the content of the film, but that he was passionate about the notion of shooting continually, working within a confined manner and being able to ‘compose’ the film like a musical score (which, incidentally, he also provides for the film). But this lack of investment in the material seems to blind him to his own self-consciousness and cynicism. Setting it in a parodied mock-up of his own office, among people confined to stereotypically absurd Hollywood types fresh from Robert Altman’s The Player was a clear set-up for what Figgis sees as the enemy that he is fighting against. The fictional Red Mullet’s constantly manipulative and semi-conscious attempts to find the next ‘big thing’ or some new way to break ground in cinema seems, ultimately, to be exactly where Figgis is coming from. In Time Code, Figgis has achieved a ‘first’ and written himself into the Hollywood-centric record books. Yet, it’s hard not to feel that this could have been an infinitely more interesting project given the same investment of energy in the ideas and content as in the exploration of the potential of the technology.