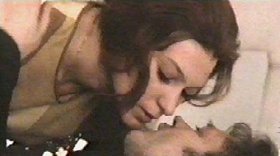 Andrei Tarkovsky’s Solaris is a visually hypnotic, deeply affecting story of conscience, love, and reconciliation. The film opens with a view of a lake, as seaweed undulate beneath the current. The camera then pans to reveal a pensive psychologist, Dr. Kris Kelvin (Donatas Banionis), out for an afternoon stroll at his estranged father’s country house. Kelvin has been writing a highly influential report for the Solaristics board in response to the strange data being transmitted to ground control by the three remaining cosmonauts aboard the orbiting space station: Dr. Snouth (Yuri Yarvet), Dr. Sartorius (Anatoli Solonitsyn), and Dr. Gibarian (Sos Sarkisyan). The Solaris program is at a crossroads, and Kelvin has been appointed to visit the crew, report on their mental health, and recommend a course of action to the agency. On the day before his flight, a former cosmonaut, Berton (Vladislav Dvozhetsky), his father’s personal friend and colleague, visits him. Years earlier, Berton was sent on a search and rescue mission for a missing cosmonaut, and had a first-hand encounter with the bizarre metamorphosis of the Solaris ocean. Despite Berton’s impassioned pleas not to stifle the exploration of the unknown, Kelvin is unmoved, believing that human emotion has no bearing in the search for Truth, and raises the possibility of, not only abandoning the Solaris mission, but irradiating the turbulent ocean in order to destroy its inexplicable activity. Upon arriving at the space station, Kelvin is greeted with apathy and evasion, along with the tragic news of Gibarian’s suicide. A videotaped message shows a frail, disheveled Gibarian driven to despair by tormented visions of a lost loved one, and a profound sense of isolation. After a restless night’s sleep, Kelvin begins to realize the validity of Berton and the crew’s seeming hallucinations after his dead wife, Hari (Natalya Bondarchuk), mysteriously reappears on the station.

By setting up artificial boundaries, we squash the idea that thought is limitless – Dr. Messinger

Similar to Tarkovsky’s other films Andrei Rublev (1966) and The Sacrifice (1986), Solaris is an unsettling portrait of man’s inequitable, often destructive interaction with his environment. Inherent in the tenets of the Solaris mission is a preconceived theoretical filter that accepts only those phenomena that can be logically explained or physically proven. Some scientists have hypothesized that the Solaris ocean is a thinking substance, a primordial brain, capable of realizing thought. However, lacking concrete evidence, Berton’s deposition to the Solaristics board is met with skepticism and calls for the immediate termination of the program. A mission scientist, Dr. Messinger, eventually succeeds in dissuading the board from canceling the project by exposing their innate fears, which lead them to impose artificial barriers to conceal Truth, and proposing that the strange phenomenon, itself, is cause for further study, and not an excuse for an apprehensive retreat. In reality, it is not the failure of technology that impedes the attainment of Truth, but humanity’s own inertia and myopic vision.

The theme of self-created boundaries, similarly explored in Tarkovsky’s Stalker (1979), proposes that there are no real impediments in the search for Truth, only a perceived fear of the unknown, and a sanctity in oblivion. The appearance of Hari on the space station elicits the same instinctive response from Kelvin, preferring to send her away in a crew escape vehicle, rather than confronting the difficult issues surrounding her suicide. Similar to the board presiding over Berton’s deposition, Kelvin initially chooses to abandon the mission and destroy that which he cannot understand. However, after arriving at the space station, Kelvin, shown literally stumbling onto the mystery of Solaris, realizes that it is a reluctant journey that he is compelled to take. In essence, by beaming x-rays at the surface of the Solaris ocean, the crew has unwittingly crossed the threshold of the board’s artificial exploratory boundaries: the point of no return. Through irradiation, the cosmonauts have performed a figurative cerebral probe into the recesses of the primordial mind of Solaris, which is answered with a reflection of their own subconscious.

We are in the foolish position of a man striving for a goal he fears and does not want – Dr. Snouth

The idea of frontier exploration as a natural evolution in the search for Truth proves to be a convenient diversion from personal regret and isolation. After Berton’s abrupt departure, we see Kelvin burning documents and photographs in his father’s backyard, attempting to divorce himself from his past. However, aboard the vast, isolated space station, he cannot escape the guilt of his wife’s abandonment and, inevitably, her suicide. When Hari initially appears, she is frightened and helpless, and Kelvin responds with denial and cruelty, unable to reconcile with his own emotional ambivalence over her return. When Hari reappears on the following evening, she is tenacious and possessive. But is this the Hari who took her own life.or the Hari who was sent away in a rocket.or yet still, another new Hari? More importantly, if this is not the real Hari, then is this Hari an accurate reflection of how she truly was, clinging and desperate, incapable of surviving without him? Or rather, is she a projection of his own needs of her?

As Kelvin briefly separates from Hari, she crashes through a metal door, panic-stricken, and severely cuts herself. Kelvin returns to tend to her, only to find that her deep wounds have already healed. He introduces her to the crew, who already know that she is a Guest–a physical manifestation of Kelvin’s subconscious, a Solaris-generated realization of his wife. Experiments have confirmed that the Guests are not biologically human, but composed of neutrinos stabilized by the local force field, and, consequently, Dr. Sartorius suggests an autopsy of her. However, despite irrefutable proof, Kelvin disagrees with his conclusion, believing that he has been given a second chance to reconcile with his wife, and refuses to acknowledge that she is not who she appears to be.

But it is soon evident that Guest Hari is truly not his wife. Devoid of personal memories and defined solely though her relationship with her husband, Guest Hari is without individual identity. In an attempt to understand the essence of Hari’s life, she asks him about their troubled relationship, realizing that she cannot be the real Hari. Although she is an accurate physical replica of the real Hari, she is also an interpreted, transferred memory of her. However, if Guest Hari is, indeed, a subjective perception of the real Hari conjured from fragments of Kelvin’s subconscious, then the question arises: Is she, then, Kelvin’s idealization of the real Hari, or a manifestation of his own fears? Is his affection for Guest Hari a reflection of his own guilt of survival, or an innate longing for connection, an intimacy that never existed during his difficult, abbreviated marriage to the real Hari, an emotional Contact?

I’m something quite different – Hari

The behavior of the crew towards the Solaris Guests defines their occupationally inherent characters. The suicidal Gibarian, a physiologist, seems unable to reconcile his beloved’s reappearance with his profound grief for her real physical loss. Snouth, a cybernetics expert, appears incoherent and mad, interacting with Guests in unorthodox ways, attempting to achieve the sought after extra-terrestrial Contact. He regards the Guests as a communicative challenge rather than an alien curiosity. Sartorius, an astrobiologist, is the least affected of the crew, logical and impassive, seeing the Guests, not as cognitive beings with whom he can interact, but as empirical, molecular puzzles. Their appearance on the station provides an inexhaustible supply of subjects for his research. Intrigued by their regenerative capability, he views them as a potential conduit to immortality.

Sartorius, contemptuous and dismissive of Guest Hari, trivializes her existence as an interconnected assembly of unstable neutrinos, as antimatter, a classification akin to defining man as a simple carbon-based cellular network. However, if the essence of humanity lies beyond physical composition or common ancestry, then it must reside in attributes that separate man from other living organisms: the human soul. Furthermore, if a unique soul does define humanity, then its intrinsic recognition must be universally evident among all of mankind, irrespective of geography. Reason and emotion are inherent properties of the human soul, transcending the cultural and ideological bounds of a created society. Possessing rational thought, compassion, and conscience, Guest Hari is, in many ways, more human than the emotionally inscrutable Sartorius. Her capacity for selfless sacrifice and unconditional love are manifestations of a real soul, and consequently, define her humanity. Though not innately human, she has evolved to become one.

Solaris is an exploration beyond the vessel of humanity, a journey to extend the territorial bounds of man, only to find the vast frontier of his own subconscious. In a society driven to explore the farthest reaches of the universe in search of Truth, the Solaris ocean provides an introspective catalyst for probing the deepest regions of the human soul. But inevitably, the Truth proves to be as elusive as the thinly veiled reality of Solaris: Can a man truly reconcile with his irretrievable past, or is he inexorably bound to the guilt and regret of his spiritual longing?