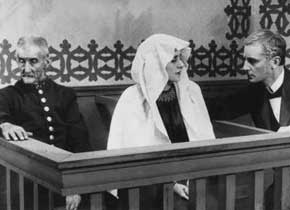 Carl Theodor Dreyer’s debut feature, The President, is probably his most aggressive and socially pointed work, attaining an astonishing maturity for a first film. It deals rebelliously and in an enraged fashion with several moral issues that probably bear some connection with Dreyer’s own alleged status, if one believes Maurice Drouzy’s book (1), as the son of an unwed mother (later adopted by a married couple). It was also a film deeply admired by Danièle Huillet & Jean-Marie Straub, whose early short, Machorka-Muff (1962), may well have been influenced by Dreyer’s film.

Of course, a long time has passed since 1919, and it might be said that the kind of melodramatic events depicted in the film – although not impossible somewhere – have become infrequent in such advanced countries as the Nordic ones. However, The President retains its force thanks to a spare stylistic approach to what could have become (but is never for an instant) a weepie. It is rather a very angry indictment of certain attitudes which Dreyer blatantly rejects and which, alas, are even now far from mere emanations from a distant past (as anyone familiar with some of the sentences passed by Spanish judges will be forced to acknowledge). Even in its immediate historical context it is a prescient film, and I cannot recall as thorough an indictment of the deeply seated ideological attitudes then seen as “normal” for prominent men appearing until Charles Chaplin’s A Woman of Paris four years later.

Of course, one can pinpoint in The President particular details which announce thematic, visual or dramatic elements deployed in Dreyer’s later films, which most people nowadays will have seen before they get to this one. These include a torch procession (Gertrud, 1964) and the appearance of the first of the many weak, mother-dominated male characters in his work (one thinks in particular of Martin in Day of Wrath, 1943) who betray the women they love (or who think they love until they have to choose).

Strangely, this is not a film that gains much by being watched from an auteurist standpoint (and it will probably now only be shown in a retrospective showing of Dreyer’s work, with few other opportunities emerging for the screening of a 1919 film that lacks the status of “a classic”). This screening context will prompt most spectators to scan its images in search of “Dreyerian” or “Dreyerish” shots, and perhaps themes, thereby not really paying thorough enough attention to the film itself, which is far more interesting as a Danish film made in 1919 than as the start of a very great filmmaker’s career. Compared to Ordet (1955) or Gertrud, The President looks tentative, awkward, crude and primitive. To see it either in isolation, or as part of a cycle of films from several European countries made in 1919 provides the proper context. Such an approach will also probably be far more revealing, surprising and satisfying.

As the film itself suggests to the viewer, by initially showing an old book being opened and its pages turned respectfully, and a swift Google search also confirms, The President presents itself as a respectful adaptation of a now forgotten, but in 1919 still-popular novel, Der President (1884), written by the German-language Austro-Hungarian author Karl Emil Franzos (1848-1904). As one might suspect from the immediate onscreen presence of a seven-armed candelabra, the book was of Jewish origin and mostly concerns the author’s people’s predicament in Germany and Austria. This detail may lead the viewer to suspect that the injunction to “never marry a commoner” uttered by the dying patriarch, Franz Victor von Sendlingen, and to which he makes his son swear, might have had an additional racial bias in the source that is either silenced or merely insinuated in the film. On the other hand, that the book was not a dime-novel may explain the rather laborious narrative structure of the film, which covers three generations of von Snelingens and their respective “reckless” love affairs. These affairs are revealed via two flashbacks – where one character tells another his secret plus a couple more verbal confessions – devices that seem to have bothered the young Dreyer enough for him to avoid them as much as possible in the future.

However, I wonder if anyone innocently confronted by The President (i.e. without knowing even the name of its director) would have ventured to guess that it was a first film, the work of a newcomer to the trade, since everything in it seems quietly and maturely controlled, and without formalist (even when playing with shadows on a wall in a fashion that pre-empts La Passion de Jeanne d’Arc, 1928, and Vampyr, 1932) or performative excesses (not even at the most tragic, repentant or anguished moments). The film’s narrative also quite assuredly and fluently unfolds in complex, balanced and well-composed shots (and often enough in deep focus, foreshadowing the stylistic principles deployed in only the very last Dreyer films). His treatment of landscape will also be familiar to anyone who has previously seen Glomsdalbruden/The Bride of Glomdal (1925) or Day of Wrath. In fact, considering that Dreyer’s style changed more spectacularly and more often across the course of his career – often strikingly so from one film to the next in only a couple of years – than even such great directors as Jean Renoir, Roberto Rossellini or Jean-Luc Godard, it is surprising how many of The President’s details and devices foreshadow things in one or another of virtually all of the director’s subsequent films.