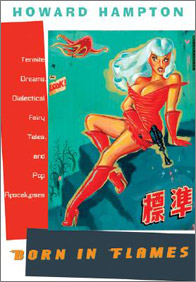 Is there another American film critic as aggressive as Howard Hampton? In “Lynch Mob”, an article for Artforum that is indicative of Hampton’s tenor, he defended David Lynch’s The Straight Story (1999) against a “mob” that included any prominent film critic “oblivious to the national poetics” of the film (p. 340), and even one who wasn’t: “unctuous middle-[brow]” Janet Maslin at the New York Times (p. 337). J. Hoberman, John Patterson, and Jonathan Rosenbaum (1) became, grouped together, “nothing more than a belligerent tourist, insulated, ignorant, and resentful, wishing he or she were anywhere but [America]” (p. 342). This “film intelligentsia” is further accused of privileging solely Eurocentric visions of foreignness, of favoring “depoliticized avant-Godardisms [and] Bresson-oil rubdowns” (p. 339). Apart from chauvinism, in this one instance we find Hampton’s traits (candor; antipathy to critical consensus), idée fixe (conspiracy), and sympathies (populist; marginal), not to mention his style (jocular), which here and elsewhere tempers his ad hominem umbrage and draws the article toward – but also limits – genuine criticism.

The only critic in the piece that receives anything resembling respect is Greil Marcus, who “saw what most critics missed in The Straight Story” (pp. 340–41), and whose success Harvard University Press (publisher of Marcus’ Lipstick Traces: A Secret History of the Twentieth Century [1989]) is apparently aiming to reproduce with this selection of Hampton’s criticism, Born in Flames: Termite Dreams, Dialectical Fairy Tales, and Pop Apocalypses (2). Apart from the shared interests of punk and the Situationists, both Marcus and Hampton noticeably dally in arcane associations, in finding connections and meaning in all, and unrelated, things; or, as Hampton has it, in noticing the “visceral logics connecting iconic forms [… the] talismans of underground continuums” (pp. 17–18). What this amounts to in practice is Hampton free-associating between the many artworks, cinematic or otherwise, in which he finds pleasure or its opposite (3).

The connections are endless and manifold: revelatory, arbitrary, wildly-constructed. In the article subtitles, Hampton will shrewdly use em dashes to insinuate continuity between far flung creators or their works: “Cat Power—Ghost World—Lora Logic—Phoebe Gloeckner”; “Sting—Hasil Adkins”. (If he’s being emphatic, he’ll hyphenate, as in “Godard-Spielberg, Inc.”) It’s as though the links were already present, and all he need do is notice and elucidate them. He is capable of being sweetly perceptive, as in his Cat Power-to-Gloeckner-in-three formulation: “in each of these misfit-girl works, the cost and worth of listening for that implacable inner voice is revealed; the immense difficulties of finding, cultivating, and holding on to it are made manifest” (p. 34). But blunt hostility is just as frequent. Hasil Adkins, for example, relates to Sting only insofar as he is “anathema to [Sting’s] fuckhead idea of culture” (p. 187).

Particularly tenuous bonds are formed when Hampton engages in pop Marxism. British punk rock band The Mekons, he argues, are innovating a kind of Rabelaisian class-consciousness that fulfills and looks beyond that which Fredric Jameson calls for at the end of The Cultural Logic of Late Capitalism (p. 196). Meanwhile, it is proposed that Spike Jonze and Charlie Kaufman, through Adaptation (2002), present the idea that “people are really puppets [which] is a good way of immunizing the audience against the idea that they, too, might be vulnerable to chain-yanking, button-pushing manipulations” (p. 348). Kaufman as flunky of false consciousness?

Hampton’s more coherent politics boil down to lowbrow boosterism. This is evident in the opening example of The Straight Story, which he values not for its place in David Lynch’s art-house, and thus middlebrow, oeuvre, but rather for its portrayal of ordinary Americans. We find populist hyperbole in his lengthy praise for the television programs Buffy the Vampire Slayer (understood through D.H. Lawrence’s Studies in Classic American Literature) and Angel (valued as better than a good noir). And his musical allegiances, of course, are largely to punk, although often misguided: punk “sought a world where [their] songs came true,” (p. 411) he assumes, where in fact the inverse is so: punk sought a world where their songs were false. They were already true.

Overstatements aside, Hampton is right to defend these varied documents, and right about “the error too many serious film enthusiasts make: dividing art and entertainment into the same hopelessly neat either/or compartments” (p. 91). That he must make this point at all may account for his aggrieved and aggressive stance. Thankfully, this truculence, which in many circumstances would be tiresome, is salvaged by his vivid style and endless verbal hijinks.

In this, he is channelling Lester Bangs, for whom he writes a sort of elegy in which all of his critical canon are name-checked: Manny Farber, Pauline Kael, Nick Tosches, Greil Marcus. (J. Hoberman goes unmentioned – perhaps too much of a contemporary of Hampton’s – but he is evident in Hampton’s work.) This is a fine crew from which to draw, and Hampton has absorbed their tutelage to the extent that he is now largely incapable of cliché – a clichéd expression, and one which Hampton would transform, but accurate nonetheless. Anything remotely resembling a rote phrase is toyed with until it becomes a pun, or is altered in meaning altogether. Take two consecutive and entirely representative sentences from a random page in “Nice Gesamtkunstwerk if You Can Get It”:

Having tried to outrun history, or at least outfox it, [Hong Kong] cinema finds itself about to go down in it. With reality’s shoe (or boot) about to drop […] an assessment of Hong Kong’s suddenly bygone golden age is due. (p. 312)

Hampton is reluctant to leave even movie titles as they stand. In an article on pornography, he mentions “the dismal ripoffs of mainstream hits so beloved for their smirky titles (Pulp Friction, The Sperminator)” (p. 399) – beloved by Hampton, at any rate, who also bastardises and amalgamates titles with abandon.

What are Tom Cruise, David Bowie, Eddie Murphy, and Bruce Willis if not dutiful stand-ins for Elvis? And think how easily their vehicles could have accommodated him: early Presley takes the air corps by storm in Top Gun Blues, radiates androgynous passivity for The Hunger (The Trouble with Vampires), returns to his rockabilly roots with Beverly Hillbilly Cat II, and uses his later decay to lend world-weary authenticity to The Last Roustabout. (pp. 218–19)

Admittedly, the above is not the finest example, but (like Tosches) Hampton is frequently funny, and his humour offsets what can be misanthropic in his prose. But it also – and this is more problematic than simple critical aggression – disallows all but the rare semblance of sincerity on Hampton’s part. The flippancy is so relentless that when he offers insight, or reveals pleasure, as he often aims to, what could make an impression is withheld or trivialised by his style. Anthony Lane at The New Yorker, another stylist (although wry rather than hostile), sometimes shows the same apparent reluctance to relinquish his tone, but he will do so to make a point, and in advance of that point, too. Hampton, meanwhile, laughs loudly over his candour: a talent and mistake.