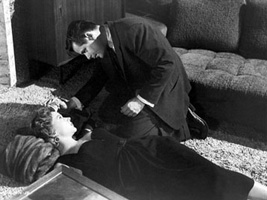 Fritz Lang was an Austrian expatriate director who brought his German Expressionist style with him to Hollywood, and helped forge the genre that has come to be known as film noir. The following notes highlight the contrasts between Fritz Lang’s The Big Heat and some of his earlier works (especially M [1931] and Fury [1936]), which are more distinctively noir-ish. Both M (his last big hit in Germany) and Fury (his first Hollywood success) are true archetypes of film noir. The Big Heat is less cynical and more life affirming, and as such is not a particularly apt example of the genre.

M was revolutionary in many ways, not the least of which in its sympathetic portrayal of a serial child killer. Hans Beckert (Peter Lorre, in his breakout role) is a psychopath who cannot control his horrifying compulsion. Legally insane, in the sense that he has no choice but to continue to commit such murders, Beckert is trapped by his psychosis, just as he is trapped by the criminals that finally hunt him down and get him off the streets. We root for him in the criminal-run kangaroo court, and are relieved when the police arrive in the knick of time.

Fury is also a study of a man ruined by his compulsions. Joe Wilson (Spencer Tracy, the first Everyman in Lang’s oeuvre) is mistaken for a murderer, and almost killed by the lynch mob that torched his jail cell. He becomes obsessed with revenge, listening with glee as his attackers are tried for killing him on national radio. Joe even lets his fiancée (Katherine) believe that he is dead, in order to make her testimony on the stand convincing. Too late, e realises that his vendetta is eating him alive. His reunion with Katherine, and a public disclosure that he survives, are tacked-on happy endings that fail to take the edge off this terrifying cautionary tale.

Both M and Fury were filmed in high expressionistic style, full of menacing shadows, mirror images and shimmering pools of light. Just as in the two strikingly similar tales of romantic obsession he made during the war, The Woman in the Window (1944) and Scarlet Street (1945), this style helps create the hysterical atmosphere that makes the genre so gripping, where the poor souls with whom we are led to identify are overwhelmed by forces beyond their control.

The Big Heat has many of the defining characteristics of traditional films noir, which often featured a central investigator with a strong personal investment in cracking the case (e.g., Edmund O’Brien’s search for the cure to his own poisoning in Rudolph Maté’s D.O.A., 1950). Initially, there is a sense that Detective Dave Bannion (Glenn Ford) lives in a world of all-pervasive corruption, where the legal authorities are unable to maintain order.

Our protagonist comes off as rash and bullheaded, and despite being an experienced detective, his miscues contribute to the deaths of the original informant, his beloved wife, and both the widow Duncan (Bertha) and her killer, Debby Marsh (Gloria Grahame). For a while, Dave seems to be a man alone and cut off from the world, an isolated individual facing an existential crisis. He takes the law into his own hands, and moves through a threatening landscape of light and menacing shadow (although Lang actually avoids expressionistic excess here).

Yet the similarities end there, and the differences become more prominent. Most films noir embody a pessimistic fatalism, peopled as they are by evil villains and anti-heroes, victimised dames and femmes fatale, all of whom generally meet with despondent ends. The depiction of a bleak universe with more evil in it than good, and of powerless individuals who seem fated to take the actions that are most likely to lead to their demise, mark film noir as perhaps the most nihilistic of genres. Similarly to tragedy, we often can anticipate these characters inevitable fall long before it actually occurs. But the protagonists of film noir are not tragic, because they typically lack both the nobility of character and freedom of choice that is necessary for the attainment of such a lofty status. Victims of their nature, and destined to fail despite their persistence, they meet their fates helplessly, like deer in the headlights (e.g., Robert Mitchum in Out of the Past, 1947, or Jack Nicholson in Chinatown, 1974).

Glenn Ford’s character simply doesn’t fit the above description. While we suffer through the extremity of his grief, and question his lust for revenge, we always feel that Dave retains his freedom of choice. The vast majority of film noir protagonists are of ambiguous moral character, but Dave remains a relatively straight arrow throughout. When he returns to Debby after failing to kill the widow Duncan, she correctly observes that, if Dave could have killed Duncan in cold blood, he would have been no different than Lee Marvin’s Vince Stone (who would have relished squeezing the life out of her). At the film’s climax, when he gets the chance to shoot a disarmed Stone, he simply arrests his quarry. It is that essential difference between Stone and Bannion that earns him the moral capital to claim the role of hero. Unlike Joe Wilson, he is not consumed by his vendetta.

Furthermore, there are many other good citizens that step up to the plate to help. His original informant sacrificed her life to tell Detective Duncan’s side of the story. A crippled secretary risked losing her job by identifying mob boss Lagana’s henchman. His brother-in-law, along with a few Army buddies, stand armed guard for his daughter when she is targeted. Both his commanding officer (who warned him off the case in the first place) and his old partner help Dave in the final shootout, on their own time and against the dictates of City Hall. Finally, Debby gives her life to expose Lagana and bring down Stone, and one is left with the impression that Bertha Duncan’s documents spelled the end not just of the mob boss, but of the indicted corrupt city officials as well.

The most uncharacteristic aspect of The Big Heat, then, is that it ends happily, with our hero being recognised as such, and social order having been restored. In that sense it has more in common with traditional detective stories than with films noir, which usually end with their main characters crushed beneath the wheel of existence.