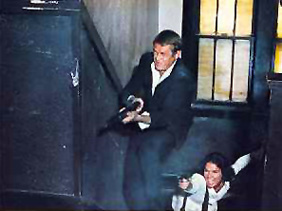 It is the fate of films from under-recognised areas, such as the action film, to suffer the arbitrary stock market fluctuations which broker reputations, as well as a progressively hazy blurring of distinctions and accomplishments generally. The Getaway is a typical and instructive case (the unique novelty of the film is that it was duplicated with a different cast in 1994 with very few changes or additions to Walter Hill’s 1972 script or to the directing, casting, and structuring strategies of the original). When The Getaway was released, Sam Peckinpah was a high-profile auteur on the basis of Ride the High Country (1962), The Wild Bunch (1969) and Straw Dogs (1971); he was at the centre of a violence-in-films controversy pushed along by his considerable self-promotion efforts as a “Hollywood maverick”; and he was a currently-practising action specialist taken seriously by the film intelligentsia. He was probably overvalued as a director, undervalued as a writer. His films popularised the use of slow-motion in action sequences and he has come now to stand as the sign for that large area of post-war Hollywood cinema marked not only by his own accomplishments, but also the rather larger ones of Anthony Mann, Don Siegel, Robert Aldrich, Budd Boetticher and Sam Fuller (1).

Seen now, The Getaway is more interesting as one of the early prototypes of the modern US action film, following from the headwaters (Dirty Harry, 1971): clean-lined, built for speed, self-effacing but an intricately worked object nonetheless. It was a product of Hollywood’s then-booming independent sector, in this case a production company controlled by the film’s star. This hints at one of the problems the project holds for Peckinpah: Steve McQueen is too obdurate and self-contained an actor to fit easily into Peckinpah’s preferred ensemble method – although even in this Scandinavian-furniture, streamlined concept film, the director manages to stuff members of his baroque stock company into the cracks (providing Peckinpah’s cherished redneck comedy are Slim Pickens, Bo Hopkins, Dub Taylor and Roy Jensen). Although too early for a Walter Murch-style “Sound Design” credit, the soundtrack work is complex and sophisticated: beyond jazz veteran Quincy Jones’ score lies elaborate use of sound-as-music as well as sharp punctuation – observe the interplay and progression of images and sounds in the opening sequence, one of the most impressive passages in the film. Whenever possible, events are presented kinetically, that is, for maximum visceral effect (The Getaway is not a reflective film; it doesn’t have time to be).

Another site of interest is the script. Adapted from one of Jim Thompson’s novels (2), screenwriter Hill discards most of the novel’s interesting but difficult aspects – the psychological portrait of the hero, Doc; the quirky, complicated deployment of characterising details; the imperceptible slide into a surreal world of symbols; and a ghastly black humour ending (3). With what remains, he fashions a concept-film script exactly as spare as that of Reservoir Dogs (1992) – situation: a bank job gone wrong; imperative: the central couple need to escape the pursuing assassins; complicating problem: Doc’s reactions to Carol’s necessary infidelity. An extremely mean antagonist is provided (Al Lettieri here, reprised in Mr Majestyk [1974]; Michael Madsen in the 1994 reconstruction). With a minimum of characters, Hill works out a geometry of parallel actions and scenes as the central section of the film, particularly effective when Lettieri and his hostage/lover Sally Struthers cartoon the jealousy/adultery theme complicating Doc and Carol’s life.

Hill’s script is dedicated to Raoul Walsh for appropriate reasons, not least of which is Doc’s request, upon being released from prison, to be taken to a park (see Humphrey Bogart’s Roy Earle in Walsh’s High Sierra, 1941). What it surprisingly does not do is provide the usually plentiful epigrammatic lines of dialogue which make most Peckinpah movies endlessly quotable and which are, perhaps, the most basic element of his style (it does manage to include the usual misogyny, particularly abetted here by Sally Struthers’ performance). The script looks forward as well as backward: the opening sequence with its themes of imprisonment versus freedom and its use of animals is a striking forerunner to the opening sequence of Hill’s 48HRS (1982). The elaborate and elegant final shoot-out in the El Paso hotel has nothing to do with the way action sequences are sculpted in other Peckinpah films, and everything to do with the speciality item Hill developed them into in his own directing.

An interesting point of intersection then, a crepuscular Peckinpah with a nascent Hill, a traditional story and genre with the beginnings of the contemporary “concept” approach. Except for some romantic imagery required by star egos, a trip through a cold, hard-hearted world which makes its characters do extraordinary things with their suspect virtuosities in order to buy a chance at a happy ending.