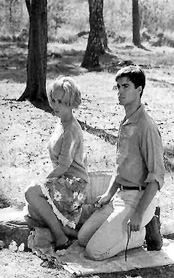 A woman’s first feminist deed is looking;
To say, “Fine, people may look at me, but I will look back”

You don’t know how to use your eyes. You only want to be looked at, not to look. That’s why you don’t see, that’s why you know nothing about cinema…

Answer songs are a staple of folk music. They cleverly recall the musical idea of a popular song, and with commentary and criticism, expose the original’s perhaps unnoticed ideological cargo. For this reason, I want to read Le Bonheur first as an “answer song” to Truffaut’s Jules et Jim.

You will recall that film: A Homeric, homo-erotic friendship a la bohème, of two friends who will be separated by nothing, not even by the eternal feminine. But that conniving bitch tricks them, and succeeds in death where love, sex, and war have failed, by means of a car and a bridge to nowhere. Two men who can’t stop interpreting a woman as if she were a character in a novel, truly insisting on her unreality, until she is finally “understood” to death. Catherine (Jeanne Moreau) is the ultimate sex object: from statue, to mother, to whore, to cindered ash in less than two hours. Jules, the surviving drone, is left alone to tend the hive.

“I am the unhappiest man on earth, because I have two wives. The first wife, and the second wife.”

Jules (Oskar Werner) thinks he’s talking about Catherine, but he really does have two wives, except one of them is a man. Until death do him part. This little allegory of the coming sexual economy was tricked out with all the bells and whistles of Truffaut’s considerable technique, but they could not hide the message in the bottle: Male desire and its attending, submissive gaze makes “Queens” out of mere women. Shades of the old country song: “I didn’t know God made honky-tonk angels….” (2)

When Varda’s Le Bonheur was released, it was greeted with a polite cough of scandal – that a woman should dare to make a film on the male-privileged subject of male sexual privilege. Le Bonheur took the Golden Bear at Berlin, and quickly vanished almost without trace, into the rising political sirocco on the horizon. After making Les Créatures (1966) with Michel Piccoli and Catherine Deneuve, Varda moved to Hollywood. In the torpor of the swinging ’60s, no one wanted to hear Varda’s cynical suggestion that the fabled Sexual Revolution might not be exactly the best thing for women.

The film begins in summer. It ends in the autumn of the next year. François (Jean-Claude Drouot) is a carpenter. He is married to the lovely and domestic Therese (Claire Drouot), the archetypal wife and mother. They have two children. Therese works as a seamstress, out of their apartment, to humbly supplement their income. François, out on a job, meets Emilie (Marie-France Boyer), who connects his phone call home. The two are soon flirting in earnest, and François finds himself in an affair with the “too tempting” postal worker. To his surprise, he is not guilt-ridden, but rather increased in his happiness. The carpenter turns rhapsodic: his wife is like a meadow, his mistress like a wild animal. He refuses to lie to the mistress, even as he lies with her. He loves his wife, he loves them both.

As the affair progresses, Varda allows herself a single sardonic touch. She begins to intercut the two blondes in François’ life. Jump-cutting from one blonde to the other begins to take its toll on the simple carpenter. He will not choose. He has come to believe that his happiness depends on its “additive” quality.

François’ desires are taken for granted. Le Bonheur is a film that is devoid of narrative conflict. How else to show the tedium, the sweet stillness of happiness? Varda just looks on, without editorialising. Caught in her camera, life is scrubbed clean of melodrama. Varda shows us exactly how seductive and powerful is the pageant of male happiness. Drouot is completely charming. The women in his life want only to see him happy. They are fatally in love with his happiness.

But the happy man is like the millionaire whose fortune is haunted not only by his own dead labour, but by the dead labour of countless others that he cannot even imagine. Better not to think too long upon these things. Happiness is a fruit that tastes of cruelty, as Varda once archly said in reference to her film.

By her defiance, Therese understands what the childish François never will – the emperor’s lament – that a man will never be happy with two wives. They fight, reconcile, make love. He falls asleep. She does not. Her action, which will change everything, and nothing, is a perverse token of her love.

Le Bonheur is essentially a deftly sustained cognitive dissonance experiment. The synthetic “warmth” of the images, counter-posed against the “coldness” of the psychological approach. Each draws a special charge from the other. There has never been a verfremdungseffekt quite like this one. Brecht must have triple-axelled in his grave. Mozart’s “Clarinet Quintet” is swept away by the darker “Adagio” and “Fugue in C Minor”. It works perfectly, providing the happiest of all happy endings. But Jacques Demy, Varda’s husband, thought the film’s conclusion monstrous. Why? You must judge for yourself.

Amongst its marvels, Le Bonheur performs an interesting alchemical trick: it turns post-mistress into mistress, and mistress into wife, and surrogate mother. You hardly know how the trick is done. Varda must have the philosopher’s stone in her studio.

Varda’s ambivalent position among doctrinaire feminists is easy to explain. She remains wickedly “plus royaliste que le roi”. Her films were criticised as endorsements of patriarchy, her women too unambivalently maternal or “superficial”. Le Bonheur was singled out as particularly lacking in truthfulness. Varda was dangerously promoting a male fantasy. No women would behave in this way. But is this really the case? The story, in its particulars, does not differ even in the slightest detail from the noble and pedagogical tale of Ted Hughes, Sylvia Plath and Assia Wevill, only in its ironic, detached working-class treatment of the myth.

Acknowledged or not, Varda is nothing less than a Griffith in the further development of cinema. She is an artist of the first rank, an avant-gardist and explorer almost without peer. When she began to make her films, she was unencumbered by the baggage of cinema, and she still travels light. I can’t imagine the films of such diverse directors as Alain Resnais, Marguerite Duras, Chantal Akerman, Bertrand Blier, Sally Potter, and even Christine Pascal without acknowledging that the restless tourist Varda was there first every time.

And did Truffaut learn his lesson? I can only point out that Two English Girls (1971), with its genders reversed, while hardly perfect, is less misogynist and more ambiguous than its more famous cousin. Like a bleached milestone on a longer journey, Le Bonheur lies intriguingly between the two films, insisting that “… it wasn’t God who made honky tonk angels” (3).