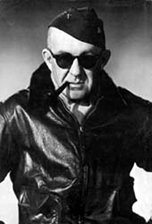 John Ford is widely regarded as one of America’s greatest film directors, a myth-maker who put his distinctive stamp on the Western genre, and whose films memorably portray key moments in American history. Although known primarily as the director of classic Hollywood movies like Stagecoach (1939), The Grapes of Wrath (1940) and The Searchers (1956), there’s more to Ford than his impressive feature film career. Many people may not know that Ford served in the U.S. Navy during World War II, and worked for the O.S.S. (Office of Strategic Services) as Chief of the Field and Photographic Branch. During this time, he undertook various missions for the Navy, and was involved in the production of training films and war documentaries, one of which was The Battle of Midway. The battle itself took place in the Central Pacific from June 4 to June 6 1942, and Ford was present as the Japanese attacked the American outpost on Midway Island. How did such a noted Hollywood feature film director, a man who Tag Gallagher calls “… the great poetic chronicler of American history”, approach documentary filmmaking, and more specifically, how did he chronicle the events at Midway? (1)

“This is the actual photographic report of the Battle of Midway” declares the film’s opening titles. The Battle of Midway chronicles a significant moment in U.S. History, as have other Ford films like Young Mr. Lincoln (1939) and My Darling Clementine (1946), but the focus here is on ordinary Americans filmed at the time, not famous historical figures seen in retrospect. Although the use of a hand-held 16mm camera will strike some as uncharacteristic of Ford’s style, there are many “Fordian” touches throughout the film. As well as utilising recognisable actors who he’d worked with before to supply the film’s voiceover (including Henry Fonda), Ford shows us striking images of men framed against a vast landscape, with the silhouettes of figures resting before the warm glow of a sunset echoing the shots of cavalry-men riding across the horizon now familiar from the director’s Westerns. There’s also a flashback to an average American family at home, who are named in voiceover and shown going about their daily business. This sequence personalises these people for the viewer, implying that an attack on them represents an attack on every American, many of whom have friends or family members serving their country. Sometimes the voices commentating over the footage directly address the viewer; at other times, they talk to each other. The result isn’t simply an objective commentary over the action, but a sustained dialogue with the audience, putting into context the footage that we’re seeing, and establishing a semblance of order and meaning in the midst of a chaotic situation.

Ford weaves voiceover and music into the real footage of the battle, shaping the material to show us the conflict as he saw it, and moulding these elements into a narrative to show the American people why they’re fighting. As Lindsay Anderson observed, The Battle of Midway “… is more to be admired for the extraordinary conviction and virtuosity with which its vivid, scrappy material is used to dramatise the Ford heroic myth, than as a documentary picture of war” (2). Fordian dramatics aside, the film is still constructed around actual combat footage and when the Japanese attack finally comes, we’re thrust into the heart of a very real battle. Some of the most memorable moments in The Battle of Midway are when the film jumps in the camera due to a nearby explosion (and despite being injured shooting this footage, Ford continued filming the battle), which is shocking proof that this is really happening. Other shots that look staged, such as the marines raising the American flag in the midst of battle, are also actual events filmed by Ford. Some may argue that this moment is simply unbelievable, that surely no one would raise a flag while they are under attack. However, the film seems to anticipate our scepticism about this part of the film, with the voiceover authenticating the moment by announcing “Yes, this really happened!” (and Ford reiterated this, telling Peter Bogdanovich; “… eight o’clock, time for the colours to go up….”) (3) When we see the same flag again in the closing moments of the film, it’s glimpsed in long shot, still flying high, but shrouded in clouds of black smoke. Although this symbolises that the Americans have won the battle, it also suggests that they’ve paid a high price for their victory (a sentiment echoed by Ford’s inclusion of a funeral towards the end of the film). Ford also claimed to Bogdanovich that he photographed the whole battle himself with one camera, but some of the footage at Midway, as well as the battle at sea and the flashback to the American family, was shot by others (and Ford’s claim is also contradicted by the opening titles, which read “The following authentic scenes were made by U.S. Navy photographers”.) Of course, the fact that Ford didn’t film everything himself doesn’t alter the fact that he was present throughout the battle, capturing stunning footage in the middle of what must have been a terrifying situation, and creating a memorable documentary film in the process. As a testament to his extraordinary achievement, Ford was awarded a Purple Heart for his actions at Midway and given a citation for distinguished service. Endorsed by U.S. President Franklin D. Roosevelt (whose son is seen and named in the film) and approved by American wartime audiences, the film went on to win an Academy Award for Best Documentary.

Ford has often been called a poet of the cinema and The Battle of Midway can be seen as the reality of war filtered through Ford’s poetic sensibilities. Joseph McBride believes that Ford “… used poetic imagery to convey the feeling of the battle as it was experienced by the men who fought it, thereby enabling the American public to understand the sacrifice necessary to preserve their way of life” (4). Some may view the film as simply blatant propaganda and there’s some truth to this claim. Ford did design the film to appeal to the American people, to show them what was happening to the men fighting in the war, and to strengthen their resolve and belief in the war effort. As Anderson states: “No, the film is not a documentary classic; yes, it is an extremely skilful (and heart-felt) manipulation of patriotic sentiment” (5). However, it’s also clear that Ford cared deeply about this film and that it wasn’t just a routine assignment for him. He was in the thick of battle at Midway and must have empathised and identified with the marines around him. Ford’s presence at Midway, as well as his other experiences during World War II, seemed to have a profound effect on the director, and his subsequent feature films. McBride claims that “Ford’s transition from recreating history to recording actual history marked a momentous turning point in his life and work. Transforming some of his values and deepening others, World War II gave a greater sense of authority to his artistic vision” (6). Looked at in this context, The Battle of Midway is a crucial film in the Ford canon, functioning as both a fascinating film about an historic moment in American history, and as a revealing document of Ford’s experiences and feelings regarding war.