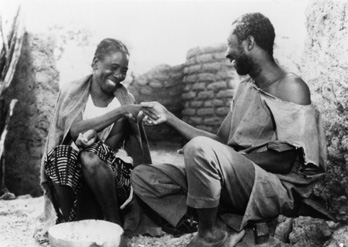 Much of the following material appeared in the Monthly Film Bulletin of March 1991 (Vol. 58, No. 686), in a review of Tilaï on its initial U.K. release, followed by a lead article. The format of the former (analytical plot synopsis followed by a critical review) has been retained. Obviously reading the plot synopsis and review before seeing the film will dissipate the suspense which is an important part of its narrative and dramatic impact.

Tilaï is one of several films made in the late ’80s and early ’90s in which filmmakers returned to traditional sources, and, as a result, depicted an apparently timeless Africa without intruders. Idrissa’s previous film, Yaaba (1989), and Souleymane Cissé’s Ye’elen (1987) are also exemplary examples of this mini-genre. Whilst not wishing to underestimate the importance of the engagement made by such films with traditional practice, society, ritual and law, it was striking how European and American critics, distributors and exhibitors rushed to enshrine them as unprecedented achievements for African filmmaking, examples of a new maturity. It was as if they were relieved no longer to be confronted by the explicit political engagements of directors such as Sembène Ousmane and Med Hondo, or of Cissé in some of his earlier work. On the other hand, directors such as Idrissa were offended by even an implied suggestion that they were tailoring the content of their films to appeal to the European market.

The fundamental problem of African cinema is articulated by the two statements which follow, the first by Idrissa himself, the second by Rod Stoneman, then a deputy commissioning editor at Britain’s Channel 4, who had responsibility for investing in African and Third World cinema:

1. “Parisian cinemas on the Boulevard du Montparnasse have more admissions in the year than all the cinemas of Africa. It is thus impossible for each (African) country to have its own market and invest significant sums (in production). Each single country represents nothing, but Africa united is a market. Unfortunately, there is not yet a policy for production and distribution. This holds back the development of our cinemas, hindering the profitability of our films, and thus the growth of private investment.”

2. “Vital though the input of hard currency from European television may be, it is important that this does not distort the direction and nature of African cinema.”

Saga smiles as he looks down on his village from a hillside, takes out his horn and blows a blast on it to announce his return from a two-year absence. Though his arrival seems to provoke some uncertainty and apprehension, the whole village comes to meet him, but only his brother, Kougri, comes forward to greet him. He reveals that Nomenaba, their father, has married Saga’s fiancée, Nogma, during Saga’s absence: “Now she’s our mother”. Saga refuses to enter the village, and settles in an abandoned hut nearby. Saga makes a secret nocturnal visit to the village to tell his mother, Koudpoko, Nomenaba’s first wife, he is leaving, but encounters Nogma, who has been massaging the aged Nomenaba. Next day, Nomenaba tells Kougri to order Saga home, but the latter rejects his brother’s offer to help repair his hut. On the way to fetch water Nogma and her sister Kuilga pass Saga’s hut, and Kuilga intercedes with Saga on Nogma’s behalf. When the two meet, Nogma tells Saga she was forced to marry his father, but she loves him. However, she refuses to go away with him out of concern for her parents, and he walks away from her in anger. However, with Kuilga’s compliance, Nogma does go to Saga in his hut. Their love-making is as good as ever. It is not until another villager spots them and denounces them that the village realises what is happening; when previously the girls’ late return had been queried, they lied that they had visited an aunt. Nogma is bound and the men draw straws to see who is to kill Saga; the task falls to Kougri. Tenga, Nogma’s father, hangs himself out of shame, but Kougri secretly helps his brother escape, having exacted from him the promise that he will leave the village forever. Kougri wounds himself with the ritual execution knife, and fires the hut to disguise the absence of his brother’s body. His mother comforts him, and he confides in her. Saga travels to a distant village, where his aunt Bore welcomes him. Koudpoko persuades Kougri to reveal the truth to Nogma, and she flees the village at night. After almost succumbing to exhaustion and thirst, she reaches Saga, and they set up house as man and wife. Horsemen sent out from the village to find Nogma fail in their quest. Shortly after Saga learns Nogma is pregnant with his child he hears, from a passing traveller, that his mother is seriously ill. He breaks his resolve to stay forever in Bore’s village, and, despite attempts to stop him, races to his mother’s side. He arrives as the drums are beating and her funeral procession emerging from the village. Again he blows his horn from the hillside; for a moment the villagers are persuaded it is his spirit, but they return as he approaches his mother’s bier. Nomenaba banishes Kougri for failing to execute his brother. Kougri seizes his brother’s gun and shoots him dead, before walking off into exile, passing in silence Nogma and Bore, who are hurrying in pursuit of Saga.

There is no doubt of Idrissa’s cinematic mastery. His choreography of the image is exemplary: the movement of the performers in relation to each other, to the camera, and to the landscape elicits acting that is often remarkable for its combination of power and delicacy. The apparently unpicturesque Burkinabe landscape resonates with emotion and meaning, offering a salutary lesson to those filmmakers from these islands who allow the photogenic beauties of British or Irish locations to charm them into substituting passive reliance upon such rural beauties for the active production of cinematic meaning. Cinema is first and foremost the art of moving pictures: not pretty pictures, beautiful pictures, or even meaningful pictures, but moving pictures. Equally exemplary in Idrissa’s work is its economy of scale, the ability to articulate a problem of universal interest within a specific and restricted social and cultural setting. Perhaps more elusive, however, is the complexity and full implication of the meaning generated by his striking images.

“Ya tilaï” (“That is the Law”) proclaims the song that opens and closes the film. In interviews Idrissa has effectively admitted that he has imagined this law, that it is a terrible one, and that “the story is symbolic”. Whilst his presentation of the film emphasises that: “In Burkina Faso, the concept of honour is essential in the structure of traditional societies. It rules over any notion of family, of blood…”, the creation of this fictional law may be further designed to cause African audiences to reflect on the nature of traditional law per se, and on blind obedience to it in general. If this is so, Idrissa has selected an extreme and imagined case to provoke audiences to question their relationship to traditional laws which they take for granted. Certainly the film sets out to study the behaviour of men in relation to the fundamental rules of their society, all societies being governed by laws. Thus, echoing the words of Kougri, it reveals the egotism of both father and son in the development of the tragedy. The one should not have married his son’s betrothed; the other should not have rebelled against the authority of his father and the village. In the end, both are punished: the son is dead; the father left without both his sons, and with a wife who has never loved him, has tried to desert him, and is now pregnant with his grandson. Moreover Kougri, torn three ways between love for his father, love for his brother, and respect for tradition, has ended by killing the brother he tried to save, being publicly dishonoured, and, as a result, banished from his home. The law has been too strong for all three, and attempts to avoid it or flout it have been in vain. However, the commonsense solution to the problem, one which Kougri and Tenga discuss early in the film, and Idrissa’s own comments seem to endorse – that the disappointed Saga should be given another woman to marry – takes no account of Nogma’s feelings and desires. She, and women in general, have apparently no say in such a solution, no voice under this law. Whilst some, like Poko, mother of Nogma and Kuilga, may come to love the husbands they have been forced to marry, only Kuilga is prepared to blame the older generation for putting such a law into practice.

One is tempted to read Kuilga’s character as indicative of a more tolerant, younger generation, and the evidence of Yaaba gives some support to such a reading, but Idrissa’s own comments on the relationship between egotism and the law leave one uncertain: perhaps what are, for a European viewer, signs of a refreshing tolerance, are for other viewers a sign of immaturity and inexperience, likely to disappear as Kuilga becomes subject to the law. Nevertheless both she and Koudpoko seem consistently to undermine the law, perhaps implicitly asserting a feminine system of opposition to the patriarchy, one based on loyalty, desire and feelings. In addition to blaming all, including her parents, who enforce the law, Kuilga encourages Nogma to follow her desire for Saga, and helps her do so, though not, at times, without fear of discovery and punishment. Koudpoko feeds Nogma whilst she is tied up following the discovery of her “crime”, and later reveals to her the fact Saga is still alive, prompting her flight. Koudpoko’s illness and death reveal the strength of the bond between mother and sons; both dash to her side with all speed, Saga doing so despite the dangers involved. He is condemned by the explicit law of the patriarchy, whose sanction of polygamy is so strong that his adultery with Nogma is regarded as incest; he successfully flees this law only to be dragged back to his death by the power of the maternal bond, manifestation of the unspoken and oppositional law of his feelings.