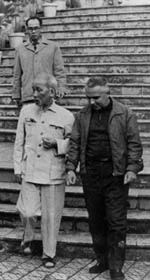 As the director of the Cuban newsreel, Santiago Alvarez was asked to travel to Vietnam and to film the funeral of Ho Chi Minh.

It wasn’t his first journey to that country during the war against the Americans. He had witnessed and filmed the first bombings of Hanoi. The result was one of his masterpieces: Hanoi, Tuesday the 13th (1967). The film was defined by its challenges. He would travel with a single cameraman, Ivan Napoles, and each would carry his own hand-wind camera. They had only fragments of film, leftovers from American news crews from before the revolution. And they had no sound recording equipment whatsoever. They had come to document the growing war drive, but couldn’t imagine the Americans would dare target Hanoi itself, an open city crowded with several million civilian residents. And they quickly understood that B-52s possessed no capacity to distinguish the visiting Cubans from their actual Vietnamese targets. Moreover, the Vietnamese themselves sought to limit the movements of the tiny film crew. They despised being framed as victims. So while Alvarez would haggle with his Vietnamese hosts, Napoles would slip into the streets to record the devastation.

I asked Napoles, “But when do you believe Santiago transcended the simple newsreel, and turned himself into an artist?” He answered, “That film, that very film. Hanoi….” (1) Given little to work with, he was compelled to invent. And the invention was something remarkable. To paraphrase his own work, his anger was converted into energy.

Nor was it his second journey to that country during the war against the Americans. He had been granted rare access to the Vietnamese leader himself. As always, Napoles stood alongside him. Years later, he described the meeting held in the modest hut that Ho Chi Minh still occupied. And he recalled the outcome of the interview, also filmed by a Vietnamese journalist operating an obsolete Soviet camera. The noise of the camera had ruined the synchronous sound recording of the discussion. “I’ll never forgive that man,” he told us. He remembers that Ho Chi Minh told them beautiful and inspiring things. “But all you can hear are the noises of that awful camera.” (2)

During their flight to Hanoi, they were shadowed by American jets. As they neared their destination, they were ordered to turn back to Cuba or risk being shot down. Commandante Juan Almeida, who led the delegation, is said to have replied, “Then tell them to go ahead and shoot us down. We’re not turning away from the funeral of our friend.” (3)

Even Alvarez, the inveterate opponent of Yanqui machinations, was unprepared for the punishment he saw meted against the north’s capital city. What witnesses feared, history later confirmed: the American aggression would only be halted once the mutinous colony had been bombed to the very precipice of irretrievable ruin. Decades later, on the occasion of an altogether different American intervention, Alexander Cockburn would declare it concisely: “New war, old lesson. Don’t fuck with U.S. Imperialism.” (4)

By the time Alvarez completed 79 Springtimes of Ho Chi Minh, his shock at the savagery of the Americans had converted itself fully to rage. This is the true significance of the most famous sequence in the film, where images of the war move from the object of violence to its literal subject, as Alvarez brutalizes the strips of film themselves. This should not be confused with an ironic post-modern trope. He said, “My style is the style of hatred for Imperialism,” and for a dozen astonishing minutes he illustrates in precise cinematic language the full expressive dimensions of this style (5). Decades later it seems obvious that this sequence resides at the very epicenter of his creative achievements.

Elsewhere I wrote, addressing his films in general:

What is striking, even today, is the manner with which they successfully balance goals that we tend to regard as irreconcilable. They are at once highly experimental, yet completely accessible. They were produced by a state-financed collective, yet register an unmistakably personal vision. They were produced without regard to posterity, yet they reverberate with a timeless vitality. They used every means at their disposal. Frequently, this meant they were made with next to nothing at all. (6)

To this I would amend an almost unbelievable observation: 79 Springtimes of Ho Chi Minh, was the single most radical document of Alvarez’s most radical period. Even now, one is stunned by the ferocity of its visual onslaught, as well as the absolute freedom of its narrative organization. Deploying a battery of highly experimental tactics, it endures as a masterpiece of personal cinema. Yet it also represented an official state response to the death of Ho Chi Minh. A response that the commissioning regime found entirely satisfying. In the span of the history of cinema, can a single analogue to this be found?

Alvarez always insisted, “The revolution made me a filmmaker.” (7) Which is doubtless true. By war’s end, he had returned to film in Vietnam more than a dozen times. And from these trips he created much of his most important work. Which affirms a striking irony: the war he despised also helped transform him into an artist.

It is the 20th of May 1998. Santiago Alvarez dies quite unexpectedly. Though he had been suffering from the intensifying consequences of Parkinson’s disease, he succumbs instead to an infection unconnected to his illness. In a peculiar coincidence, his death comes in the final month of his 79th springtime.