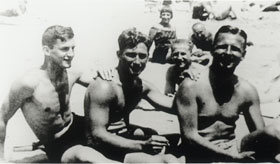 The Astor theatre had never looked so colourful as on the night when the 11th Melbourne Queer Film Festival hit our shores. The Festival’s Opening Night theme was ‘beach’, and the interior of the theatre was alive with palm trees, Hawaiian shirts and surf hunks, and the floors were decked out with pastel beach babes wearing decorative leis around their necks.

The feature film selected for Opening Night was Robert Lee King’s Psycho Beach Party (2000), accompanied by the Australian short Heather Locklear Chocolate (Stuart Vauvert, 1999). Just before the lights went down, the audience was treated to a live performance by Hawaiian hula girls and an Elvis Presley impersonator. I found Heather Locklear Chocolate to be an enjoyable, light-hearted documentary centred on a queer boy’s obsession with nail polish. The camera work and editing were simple and effective. Psycho Beach Party pays homage to ’50s B-movies, ’60s surf movies and ’70s slasher movies. Although the film is obviously a parody of these genres, it fails miserably to engage the viewer. From a generic point of view the film has nothing new to offer; even the queer twists – such as the cross dressing female detective – didn’t help. I found the screenplay uninteresting and too kitsch not to mention far too long. Unfortunately, Psycho Beach Party becomes ultimately a travesty of the film genres to which it sets out to pay homage.

The Melbourne Queer Film Festival is becoming a bigger event each year; similarly the boundaries of ‘queer’ further get extended and blurred. To gratify and represent all sections of the audience, the ‘queer umbrella’ has to expand in order to account for all the queer categories. At first, the amount of films showed at this year’s Festival seemed overwhelming, especially within such a short time frame. It was impossible to see every film. However, I doubt the Festival expects this because, quite frankly, there were some films which would not appeal to all viewers. Clearly, this is because the Festival caters for a diverse audience; therefore, it requires diverse films. Yet despite this, I found some of this year’s films below par, with disappointing screenplays and a lack of basic production skills. These films were so frivolous that they appeared simply amateurish.

Why have films of this amateur level been chosen to screen in the Festival? Even a few films with a minimalist style which fell into the category of ‘avant-garde’ or ‘experimental’ – director Andi Mastrosavas’s Silent Gospel (2000), for instance – lacked quality. Somehow it seemed more significant to the Festival programmers to have more sessions and more films rather than include fewer films of better quality. In this instance it is fair to say that sometimes less is more.

The Festival’s overriding objective is to introduce and promote queer films to the community: to have presentations of queer films from around the world recognised and projected onto the big screen. As I have stated there was something for everyone. Feature presentations included the rough, in-your-face 101 Rent Boys (Fenton Bailey and Randy Barbato, 2000), a film which is confronting and not for the faint hearted, as male prostitutes talk ingenuously about their everyday sexual activities. Director Greg Berlanti’s The Broken Hearts Club (2000) was one of the big sellers this year. Although the film doesn’t really ask for very much from its audience, it does provide a light-hearted entertaining glimpse into a group of West Hollywood baseball buddies.

More challenging films in the Festival included the Phillipines film Burlesk King (1999) directed by Mel Chionglo, and the Chinese film Man Man Woman Woman (Nan Nan Nu Nu, 1999) directed by Liu Bingjian. Both films, though different narratives, offered rare and compassionate views into the queer societies within their respective cultures. For an Australian audience these insights into offshore queer cultures are particularly valuable.

One of the most compelling documentaries at the Festival was Paragraph 175 (1999), directors Rob Epstein and Jeffrey Friedman’s hard-hitting film is a sympathetic account of queer life in Nazi Germany. Out of the estimated 10,000 – 15,000 men who were imprisoned for same sex relationships during this time, only ten survived, and here they share their harrowing and sometimes inconceivable stories. What makes this a powerful and disturbing film is the use of archival footage and the hand-held, sometimes gritty, cinema verite style which leaves the viewer feeling disturbed and overwhelmed by the pain and unjust treatment these men were subjected to during the Nazi regime.

The ‘Oz Shorts’ session was very enjoyable with a batch of refreshing films from Australia. One of the highlights was director Kathy Sport’s About Vivien (2000), a documentary centring on a cross-dressing male in the 1940 and 1950s who has been called up for duty in the Australian Army. The film gives a heartfelt and humorous account of a “sissy-fied boy’s” trials and tribulations during this time; the cinematography and editing successfully encapsulate the mood and period of the film. Director Debbie Gittens’s documentary Sissy (2000), which depicts a few days in the life of three gay Koori Queens, was highly informative, bringing to the fore issues of racial prejudice and homophobia which these men deal with on a day to day basis in their community.

Another ‘Oz Short’ worth mentioning is Lisa Dombrosky’s Taste (2000). At first I was confused as to why this film was chosen for the Festival as it didn’t initially appear to feature any queer content. Here we watched a heterosexual couple have relationship problems, with affairs lingering on the horizon. Then there came a sigh of relief from the audience as the penny finally dropped: Danny, the new love interest for Suz (of the now defunct heterosexual relationship), used to be a woman. Although Taste raises many issues encountered in transgendered relationships, it manages to deal with the issues of personal identity in an enlightening way by using a comical narrative to deliver its message. For example, Suz accuses Danny that “You had me all hot and bothered” and Danny replies, “so now you are not so hot, but you are still bothered!” It’s this witty humour which made Taste the audience choice award winner at this year’s Festival.

The ‘Back By Popular Demand’ session was the Local Lezzos session: a mixture of experimental, documentary, and narrative short films from Australia. In my opinion, I felt there were too many experimental and not enough narrative films in this session. As a result, the session felt unbalanced, with most of the experimental films offering the viewer complex and often disturbing imagery (as well being fixated on the theme of sado masochism, which is such a tired ‘been done before’ theme). While some shorts did offer an interesting insight into the world of sado masochism, other films – director Sprinkle Magic’s Chew the Fat (1998), for example – tried too hard to be subversive, and consequently ended up being more adverse. Perhaps experimental sessions would be more useful than grouping films solely on the basis of “local” geography.

Judging by the audience’s reactions there were two highlights in the Local Lezzos session, both of which were narrative shorts. My film Passing Glances (2000) explores the quest for love and lust in the personal ads in Melbourne’s queer press. The second, Elspeth Tremblay’s Catch Her in the Eye (2000), a story of a high school girl who is in love with her art teacher. Tremblay’s film was well crafted and refreshing, and the screenplay had an air of innocence and uniqueness.

The Melbourne Queer Film Festival always generates a good vibe within the queer community. It gives important exposure to queer cinema, which we might not be given the chance to see at a commercial level. It is wonderful to have the opportunity to encounter films from around the world. Films such as Paragraph 175 and If These Walls Could Talk 2 (Jane Anderson, Martha Coolidge and Anne Heche, 2000) in this year’s Festival reflect a strong, positive portrait of queer culture, and I am looking forward to seeing what next year’s Festival has to offer.