The African Desperate (Martine Syms, 2022) captures the vital, painful moments of transition in the life of an MFA student on the eve of her graduation. Taking an art world lens to the coming-of-age genre, the film follows protagonist Palace over a 24 hour period as she tries to extract herself from the cloying company of an exclusive fine arts program in upstate New York. Palace navigates academic panels, graduation parties and bittersweet goodbyes with a weary exhaustion. This is director Martine Syms’ second feature length film (after 2016’s Incense, Sweaters and Ice), though perhaps her first to fit comfortably within the bounds of traditional filmmaking as opposed to video art. Although its premise is simple, the film refracts common narrative beats from graduation through a kaleidoscopic, textural approach to filmmaking. This is part of a broader theme in Syms’ artworks (particularly 2015’s Pilot for a Show about Nowhere and 2016’s Laughing Gas) which similarly skewer or prismatically examine the affective and communicative possibilities of mass media.

Syms has described her work as “interested in…the gulf between your lived experience and its representation”,1 a lens through which she has (in other forms) unpacked the layers of social expectation that dictate what it means to be a Black woman, an artist, and now in The African Desperate, a kind of artworld icon. The parallels between Palace and herself are clear – both attended prestigious art schools, both had showings at the Venice Biennale close to graduation, both work across disciplines and with a view to social commentary. Palace is also clearly inspired by the actress who plays her, Diamond Stingily, whose London art exhibition dead Daughter (2021) is referenced at multiple points in the film.  Her performance as Palace is powerfully empathetic – effortlessly capturing the sense of dislocation, cynicism and longing endemic to recent graduates. Her alienation from her classmates is palpable, though often it is only Stingily’s facial expression that reveals a comment to be underhanded or unwelcome.

The semi-autobiographical nature of the work lends it an astringent specificity, perfectly capturing the exceptional good taste that underscores the apparent messiness of art school. Characters drop curated academic references, wear both couture clothing and promotional baseball hats and produce work that is utterly impenetrable to an outsider. Palace’s complex and semi-antagonistic relationship to this milieu is made clear in the opening scene, as we see her pass her oral thesis defense. Palace’s academic panel speak in such verbose jargon that their unintelligibility is only punctuated by occasional profanity, cleverly articulating the hyper-specific and weaponised codes that the art world uses to keep its gates. Where Syms shines is in translating the undercurrent of menace and disrespect in a microaggression into a specific affective register. From the first frame of the interaction, the viewer is off-kilter, unbalanced and unsure, even though it is not their art that is being judged. The soundtrack lurches, stutters and glitches, offering a sonic counterpart to Palace’s various discomforts. The image itself is also discontinuous – Syms’ camera positions itself at unexpected angles, at times at an almost mawkish cant. Critically, it often sits directly in front of white characters, making the racial hierarchies of the world she depicts and Palace’s place within it immediately legible. It is hard to sit through the opening scene of Palace’s thesis examination without feeling personally on trial.

There is a strongly hallucinogenic quality to many of the images Syms creates –at points literal, thanks to the many drugs Palace is given during a graduation party– but also subtending a broader interest in the schizo-logic inherent to contemporary art. Palace’s digital life often invades the screen; in earlier scenes memes appear for a split second in the right hand corner of the frame, offering commentary and humor while critically pointing out the racist undertones that suddenly cut into Palace’s interactions. Later, the memes are replaced by what seems to be Instagram photos of the setting, jaggedly intercepting her train ride home. These sudden interruptions reveal the distance between the persona Palace performs for her art world colleagues and her true feelings. 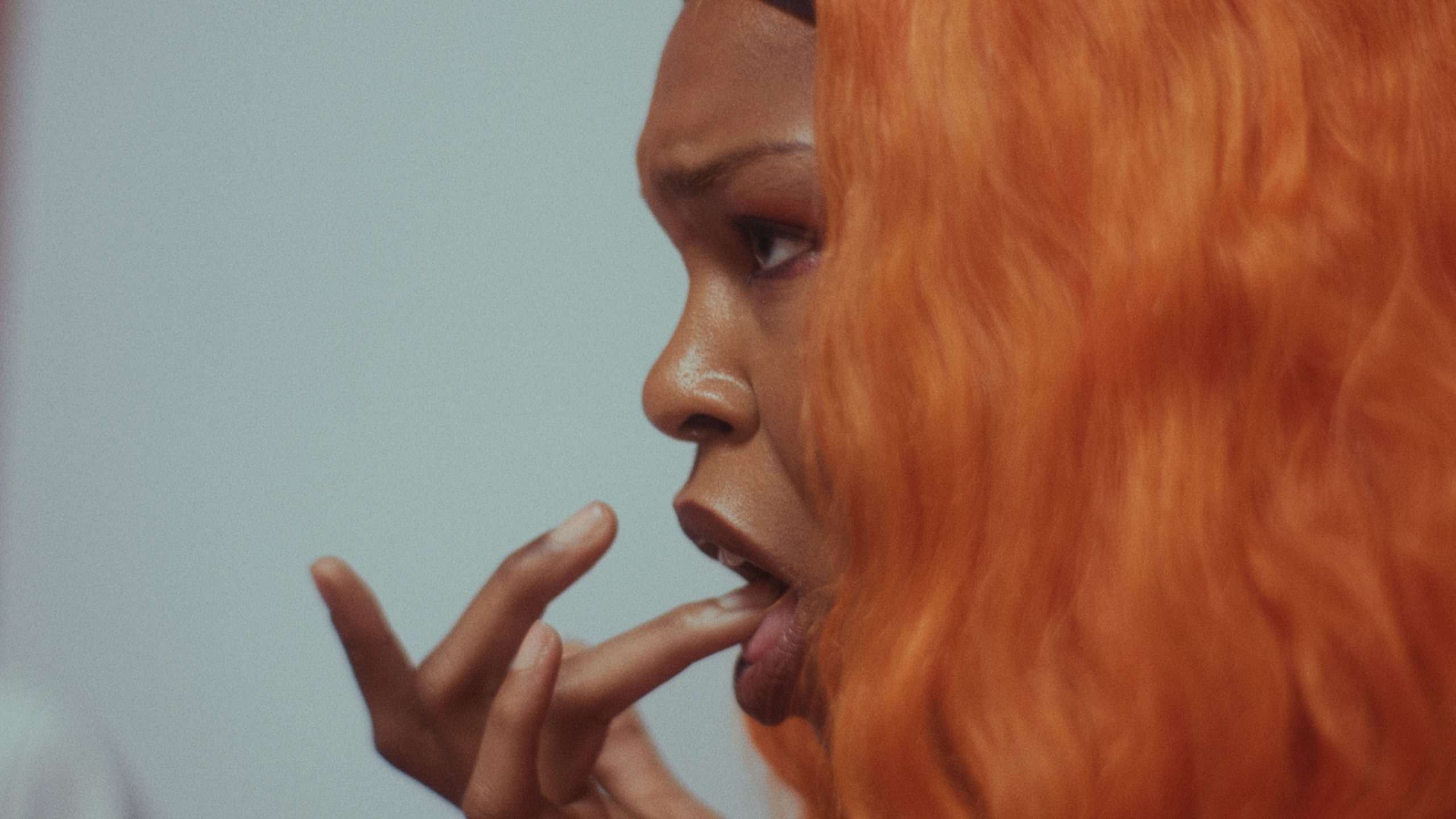 The film uses montage in the true Soviet sense, creating meaning through a complex layered collage of videos, images and sounds. The way the work imagines phone conversations is particularly unique, where insets of characters take on a gauzy, almost stained-glass appearance. However, despite the saturated colors that at times hover aura-like around characters and use of frame-within-frame spliced-in hyperrealism, there is also a constant pull of realism at the edges of the film. Palace’s mother is chronically ill and needs support, a peripheral but objective obstacle to the character’s art career. Her continued reminders to her colleagues that “that’s life” falls on tin ears. Syms’ collage style also offers the film’s coup d’etat in its final act: a complex montage of the pastoral idyll of upstate New York contrasted with a viral audio recording of a man outlining his coworker’s racist attitudes. The moment punctures the arcadian beauty of the setting and offers a sharp rebuke for anyone who dismissed the racism Palace faces in almost every interaction. Yet Palace herself seems to fall to nostalgia for this landscape even as she leaves it: her flight out held hostage by abrupt montages of foliage, party photos and other insta-worthy digital memorabilia.

The film’s quiet but biting humor and its parody of New York’s art-elite feels related to Whit Stillman’s work, particularly Metropolitan (1990). The cast outside of the protagonist are rendered into the kind of loving caricature that Stillman once wrote as “not entirely joking”. In The African Desperate, characters make gestures at both intimacy and vulnerability, with lines like “I’m a true believer in art, a true believer”, though the performances under Syms’ direction reveal these interactions as gestural, acting more as shibboleths for the in-crowd than sincere sentiment. There is also a touch of Irma Vep (Oliver Assayas, 1996) to the film, in the way characters circle and fuss around Palace, marking her as both special and as an outsider. These moments crystallize to form biting points of critique as well; revealing the ultimate dearth of progressive ideas in these apparently progressive people. Syms combination’ of wit and social commentary is easily legible across much of her video artwork, but here it forms an engaging and almost addictive pull into the narrative world.

However, to make comparisons between these works and Syms’ somewhat cheapens the complex experience that The African Desperate offers. Much like its characters, it is more creative, expressive and artistic than its predecessors. Through its hazy, holographic lens it paints a portrait of a young artist and announces Syms as a powerful voice in filmmaking.