Kutaisi International Short Film Festival (KISFF) is a pure manifestation of how film festivals can enrich and enhance a city’s cultural landscape. Kutaisi – the second largest city in Georgia – is also bursting with historical significance. From the 8th to 12th century, Kutaisi was considered the capital city of the Georgian people. In the historic town, you might encounter Synagogues with modernist architecture, the Gelati Monastery (a monastic and educational centre of the 12th century), or a postmodernist anomaly, 11th-century Bagrati Cathedral, which was defaced with the glass elevator in 2011. Kutaisi is additionally the hometown of the pioneer Georgian filmmaker and cinematographer Vasil Amashukeli who shot the first full-length Georgian film in 1912 Akakis Mogzauroba Racha-Lechkhumshi (Akaki’s Voyage to Racha and Lechkhumi) where the film’s first location is Kutaisi (however, the full footage isn’t preserved nowadays). Besides those attractions, near Kutaisi, you’ll find Sataplia and Prometheus karst caves and the ancient footprints of dinosaurs in natural parks that became the leading idea of the prize of KISFF – golden dinosaur – and the recurring motto of the festival: Leave Your Footprints. 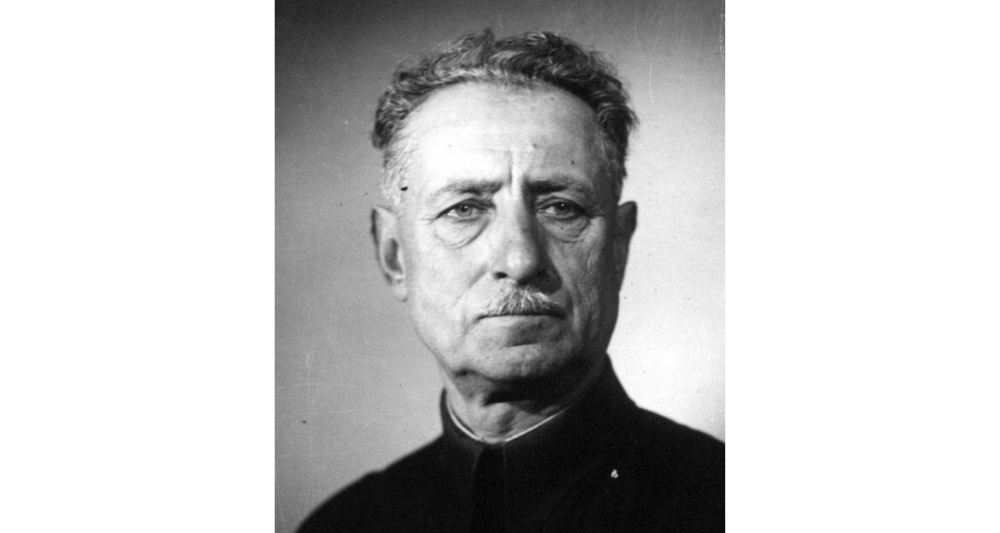 Kutaisi is also the city of subcultures – the first Georgian Hip Hop, Rock, or Heavy Metal groups were formed there in 1990s. The city has potential and an inner desire to remain a cultural centre of the country. The beauty and magnetism of Kutaisi is immaculately deployed in Alexandre Koberidze’s sophomore feature Ras Vkhedavt Rotsa Tsas Vukurebt? (What Do We See When We Look At The Sky?, 2021) where the auteur romanticises the city as Woody Allen idolises New York in Manhattan (1979) but in one distinction: for Woody Allen, New York is a “metaphor for the decay of contemporary culture” while for Koberidze, Kutaisi represents a kernel where the culture can survive and endure, thus Koberidze’s presence in the jury of KISFF’s 2nd edition was somehow symbolic.

The first edition of the festival was held in May of 2021 and has already left its own footprint in the Georgian film industry. The second edition was more extensive with the program, competition, jury, or international guests aiming to leave a footprint around the globe. The two competitions consisting of 15 short fiction films and 15 short documentaries were highly competitive. Out-of-competition pictures were as eclectic and copious as the city of Kutaisi itself, encompassing an outstanding Jonas Mekas 100 retrospective curated by Georgian online magazine Cinexpress.ge, ‘ex post facto’ to modern and classical Georgian shorts, Ukrainian shorts and the program of 2022 International Short Film Festival Oberhausen.

Into the bargain of eclecticism, the program can be classified into two dominant categories: on one side, directors sparkle the splendour of life by deploying brighter aesthetics, while on the other, they scrutinise darker places, a sense of culpability and gruesome spirit.

Caves Under: directors gazing into the abyss

The first title that grips attention in terms of darkness was out of competition in KISFF – 2021 Uppsala Short Film Festival competitor Nomeri 26 (Number 26, 2021) a debut short by Georgian director Gvantsa Meparishvili. Here, the author looks into the psychological complexity of a felony. Set in the Georgian mountain resort of Bakuriani, the plot is constructed around the enigmatic search for a lost skiing girl student. As the story unveils, the lost girl’s loving affair with her instructor Nika (Papuna Koridze) becomes obvious. This liaison and Nika’s awareness about the student’s death creeps in as a mechanism of depravation. Belatedly, the instructor’s girlfriend, Nata (Nini Iashvili) acknowledges the student’s death, too, and helps him hide the truth that drags the audience into the abnormal intensity of guilt. The snowy setting, foggy nature and chilling cinematic climate of Number 26 establishes Nika’s mental image – a frustrated personage sunken into the void of remorse.

In Number 26, objects become characters in their own right, acquiring an anthropomorphic mood. The opening shots are footage from the lost girl’s mobile phone; which include both video and photo footage of her observing, contemplating and sometimes spying on her teacher. Nika watches the tape while Nata enters the room, so he aims to hide the “whereabouts” of the phone and that’s when the telephone becomes a Hitchcockian bomb that must never go off because “there is no terror in the bang […] only in the anticipation of it” (Alfred Hitchcock). Nata searches the girl’s body with the drone, so the drone attributes human traits. Number 26 is a sinister experience with sophisticated camerawork, wisely set mise-en-scènes and exceptional echoes deep from the abyss.

Another guilt-driven psychological drama at KISFF was Ikhvebze Nadiroba (Duck Hunting, 2022) by emerging Georgian director Giorgi Qobalia. While hunting, the younger brother (Luka Kankia) unintentionally kills his fellow-villager and the older brother (Jano Izoria) initiates sinking the corpse in the bottom of Paliastomi Lake. In the opening shot, two revolving characters (brothers) undress by the fire burning the clothes that sets off as an act of purification, yet it’s just a physical cleansing as they carry the burden of assassination. Duck Hunting includes characters who speak in the Megrelian language – a Kartvelian ethnic tongue spoken by more than 300,000 people – the dialect only fully utilised in cinema by legendary Georgian director Otar Iosseliani in Pastorale (1979). 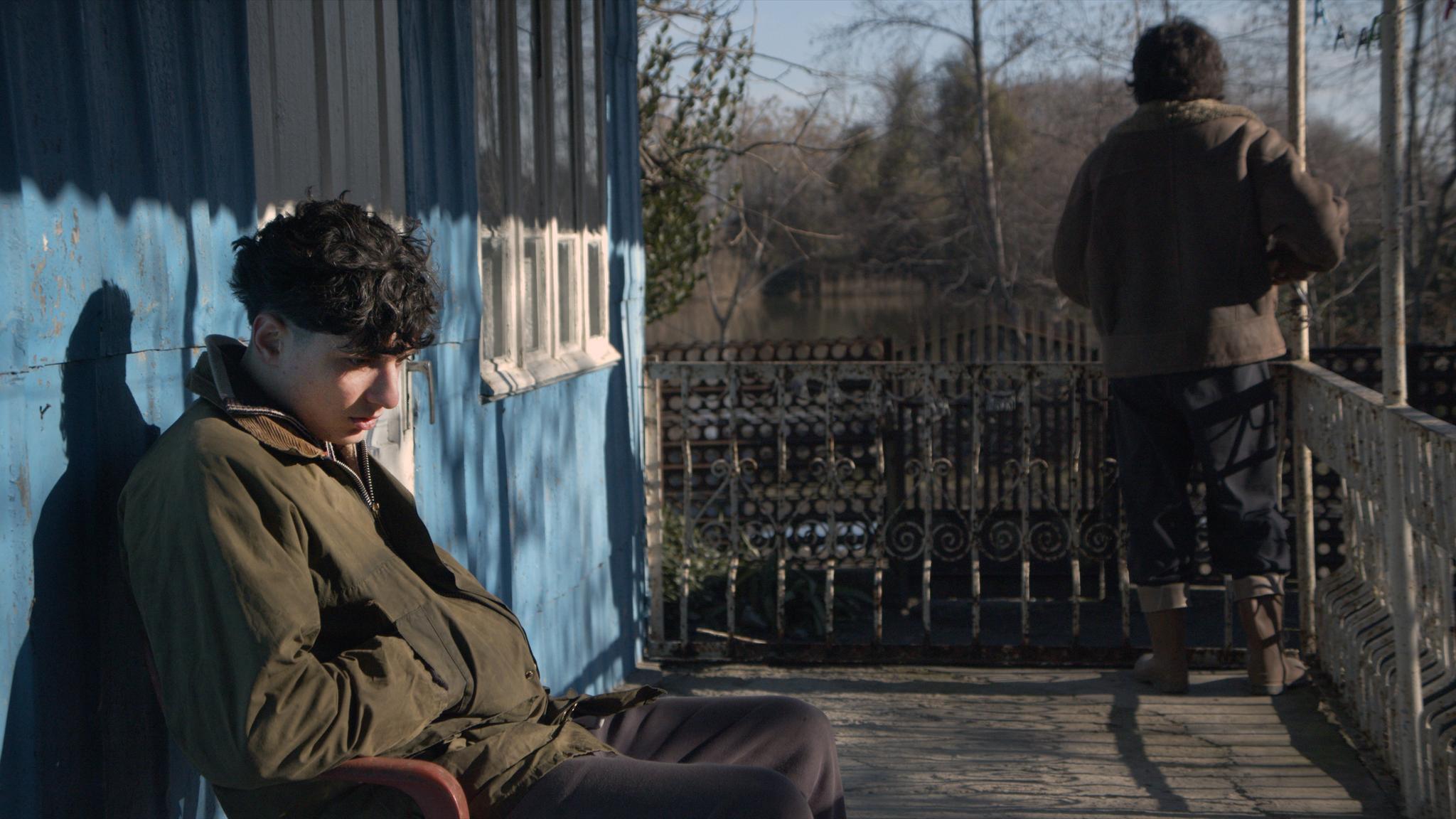 The investigation brings policemen to the brothers’ home where the audience perceives the readiness of the older brother to take the blame, except he still hides the truth. In the younger brother’s (the actual killer) behaviour, we sense the willingness to reveal the crime and go to jail. Therefore, the criminal dilemma and a conceptual discourse come to the light: who’s the better person – the ready one to take the blame if anything goes wrong or the one who needs to divulge the secret and get both of them arrested? Duck Hunting is an equivocal ordeal assembled with majestic views of Paliastomi Lake and absurdist nature of Georgian classical cinema.

Skies Over: films with hope and brighter aesthetics

The picture shining hope in the competition – Gushagebi (The Watchers, Sandro Souladze; 2021) – won the best director award at KISFF. Facing mysterious occurrences, two little brothers stay alone in a remote home while their father embarks on a journey with other village settlers to find and defeat a mystical entity terrorising the small rural town. In this coming-of-age fable, two little boys manifest courage, brotherhood and dignity by protecting their own hut, goat and family property. The observational tones disposed of by Polish cinematographer Olaf Malinowski creates an ineffable atmosphere. The work of Malinowski is so peculiar. The Watchers stands out from most modern Georgian films with natural lighting, modestly constructed stage setting, and dimly lit night scenes. 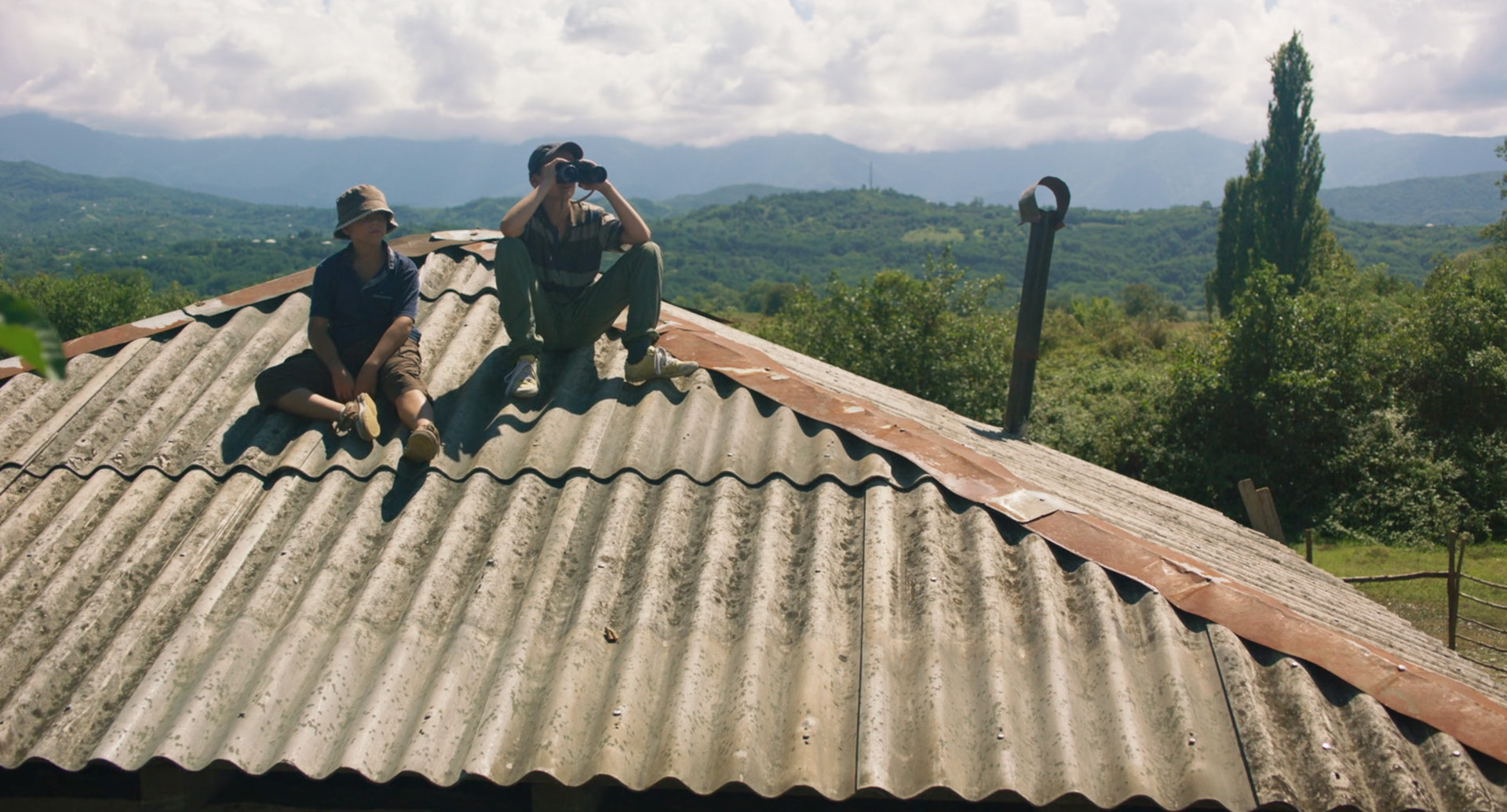 Pagan objects in the frame and the pivotal motif of witchcraft design the spiritual disposition of the picture that demystifies pace by pace as the boys realise the entity terrorising the village is actually one of their countrymen. If in transcendental films, the banal occurrences separate the living from the dead and the physical from the material (Paul Schrader), here extraordinary incidents disclose the banality of the phantasmagoria. The Watchers represents a miraculous Georgian tale where the demystification of superstitious fantasies trigger the boys’ voyage to adulthood.

One of the most optimistic narratives in KISFF competition, the Kazakh title Rukh (Mikhail Plisko, 2022), portrays the controversial encounter of middle-aged driver Yergalym and a 12-year-old boy Farukh. The boy escapes from the orphanage attempting to reach the remote Kazakh city of Aksu, and he crosses paths with Yergalym when he is standing in front of his fast-moving truck. The irritated driver gets rid of Farukh but the boy secretly creeps into the trunk full of sheep. Yergalym typifies the pure antagonist with greedy manners, embodying toxic virility and misogynist habits. He files divorce papers just because his wife can’t give birth to children, bullies and technically exploits other working-class men and grants no mercy to the 12-year-old orphan.

There’s a dramaturgical fracture when the boy urges the driver to transform and that’s when the hope shines from the screen to the audience. During the film, from time to time, a wolf appears as a signifier of danger and an alarm of evil but the beast turns away as Yergalym and Farukh change mutual gazes. The picture is naively constructed with a primitive musical score and simple allegorical tropes — that’s why its unfolding hopeful nature retrospectively refers to prominent auteur of Kazakh New Wave, Yermek Shinarbayev.

And the Golden Dinosaur Goes to: In the ruins of love

The main competition winner Nisam Je Stigao Voljeti (I Didn’t Make It To Love Her, 2022) is a subtle examination of the distressed affair between Bosnian poet Marko Tomaš and his girlfriend Maja. With refined images, Spanish director Anna Fernandez de Paco manufactures a hypnotic portrayal of a troubled relationship where the modernist architecture of Sarajevo reflects their emotional alienation and estrangement. The couple is moving flats in an attempt to complement desolate spaces of their desperate attachment, still, Maja’s sadness and despair intensify while listening to Marko’s poems through the radio. One of Marko’s poems suggests that love is “just a primitive method of communication” and the couple’s only way of connection becomes the radio from where the poet also suggests whenever he messed with love he “created intolerance.” 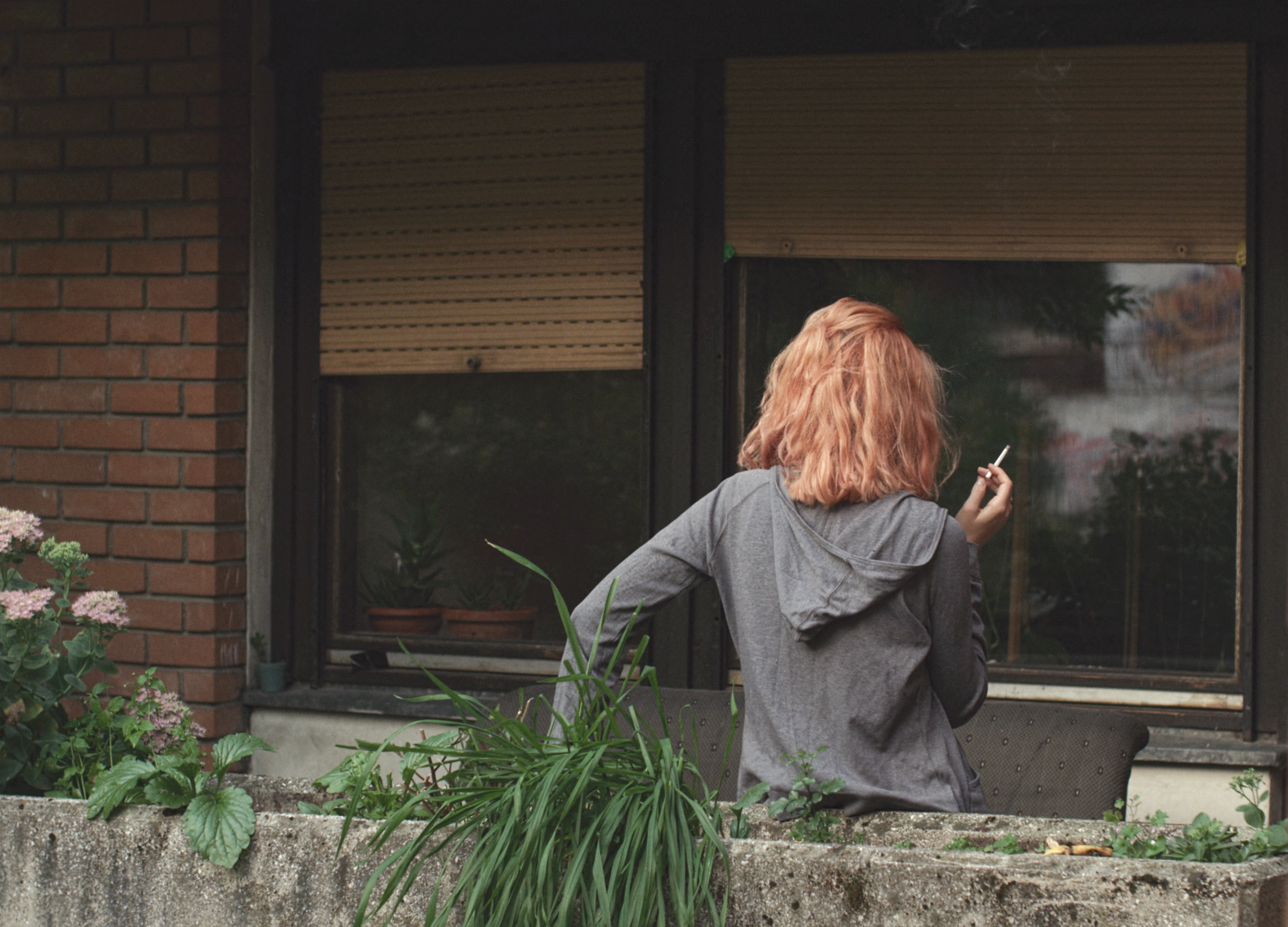 I Didn’t Make It To Love Her

The picture is so symmetrical and exquisite with photographic representation that a harmonic capacity is established on the surface of the screen while the interior of the content is severely damaging. I Didn’t Make It To Love Her represents an interplay with contrasts and inconsistencies, love and derange, and daydreams about hopeless individuals. The tracking camera vertically penetrates into the rooms of the couple, in the depths of living spaces displaying the alluring and at the same time forlorn nature, characteristics and faces of their belongings, while this movement functions as a metaphor for their shipwrecked lives. I Didn’t Make It To Love Her is a captivating experience hungry for hope and love. With balmy images and an unsettling narrative, Anna Fernandez manages to take a glimpse of the abyss from the celestial sunshine, thus celebrating this title under the sky of Kutaisi is a logical and somehow a figurative action.