At Punto de Vista (The International Documentary Film Festival of Navarra) it seems there are no margins, no outliers; that the notion of the marginal has been altered, subsumed, or otherwise composted into its entirety as a program. The presumed hierarchy of images – their production, presentation, and reception as cinema – is broken down into a parity of matter for closer consideration and renewed use. No detail is too small, no gesture negligible, within this particularly assiduous but ever modest purview of non-fiction filmmaking.

The festival’s competitive Official Selection alone may not overwhelmingly evince this – titles culled from kindred fests like FIDMarseille and Cinéma du réel here making their Spanish premieres – but the juxtapositions with shorter and putatively experimental work, along with retrospectives (a deep dive into the beginnings of documentary film in Morocco) and cross-disciplinary programs, set the scene for another fertile edition of the Basque-leaning Navarran festival. Under the tenure of new artistic director Manuel Asín, who inherited an estimable precedent set by Garbiñe Ortega during the ‘pandemic’ years, continuity was manifest more in spirit than structure; successive directors have always marked their respective reigns with indelible personal influence, while remaining faithful to the festival’s ethos as a collective inquiry as much as an exhibition. It proved a good year for women too, with 12 of the 21 films in the Official Selection coming from women filmmakers, and a special Focus program featuring Payal Kapadia and Sofia Bohdanowicz. Manuela Serra was present too, accompanying a rare screening of her sole masterwork O Movimento das Coisas (The Movement of Things, 1985).

It was fitting that such a speculative view of cinema had now adopted the angular Jorge Oteiza Museum Foundation, on the hillside in nearby Alzuza, as an alternate venue for the sake of said query. Oteiza’s sculptural pursuit of negative aesthetics found a similarly apophatic response to cinema’s spectral screen in Bruno Delgado Ramo’s installation Acciones para la pantalla (“Screen Actions”), which took the materiality of perception as its abiding concern. In the absence of a screen (or “rectangle”, as Hollis Framptom put it), what becomes of the stray light of a projection? Is it any different than natural light upon the landscape? How does the gathering of shared attention upon a dedicated surface transfigure the space of seeing? Akin to Oteiza’s attempt to ‘construct the void’, an adjacent programme of short films (including Arequipa [Barbara Hammer, USA, 1981] and Eye Eclipse [João Maria Gusmao, Pedro Paiva, Portugal, 2007] was enlisted toward a measure of fleeting luminosity, of film’s evanescent nature.

It was with such elemental lessons in the act of seeing that I began to appreciate the minor-keyed registration of certain films in competition, the ways in which the ecstatic was teased from seeming torpor; latent melancholy conjured from banality. For instance, the way Declan Clarke’s quasi-scientific treatise on international communication (Saturn and Beyond, taken from 2020 installation “The Museum of Broadcasting and Loneliness”) moved imperceptibly from a soporific mid-century-looking reel (employing 16mm film, analogue photo, and slides) on the virtues of wireless telegram and solar exploration to a consideration, and ultimate lament, of neurodegenerative disease and its inexorable claim on his father. The set-up is patient, dry, deliberate, but no less affecting in its denouement, ironic for the fact of his father’s occupational husbandry to the country’s former Museum of Broadcasting now housed in Cork. Clarke chronicles the global transmission of electricity as it flows inversely to the intergenerational inertia of emotion, a signal-to-noise trajectory that picks up pathos like the lines in Glen Campbell’s “Wichita Lineman”. 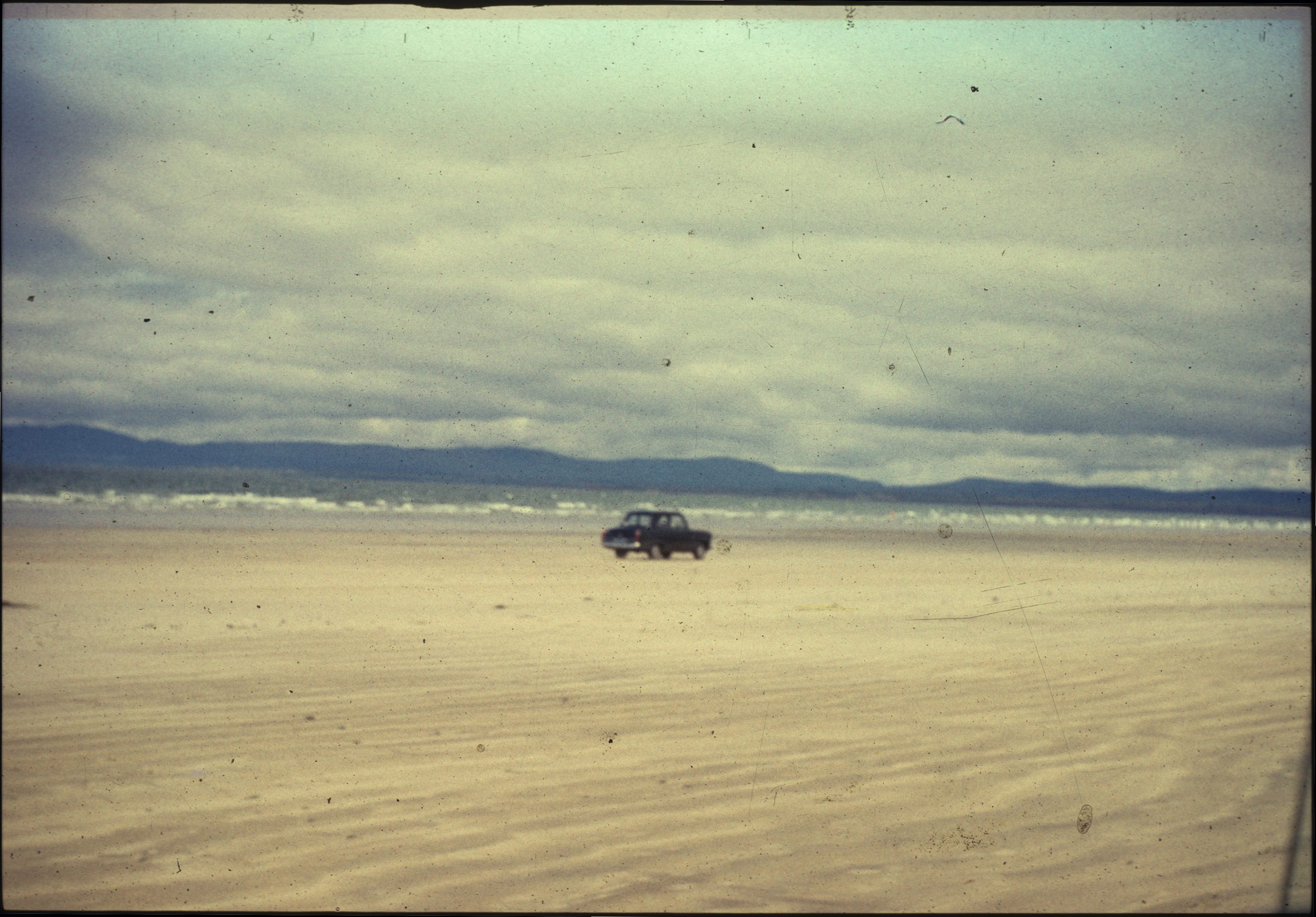 And what to make of the anonymous and most ordinary construction of a sandwich set upon the most extraordinary construction of a funereal edifice by the Venetian architect Carlo Scarpa in Luca Ferri’s short Mille cipressi (A Thousand Cypresses, 2021), a tomb built in honour of Guiseppe Brion in the San Vito cemetery in the province of Treviso? Ferri’s wry ‘meditation’ – shot on Super 8, narrated by a female voice from the text of a conference given by Scarpa in 1978 – accrues in aesthetic power from the primitively textured but precisely framed compositions underlaid by the architect’s thoughtful ruminations, revealing a fastidious geometric methodology “rich in expressive scope and movement”. Scarpa’s working in fractions of a centimetre (which he finds “too arid”) allows materials to relate in atypical rhythm, while the use of Portuguese pink marble in lieu of transparent windows yields a beautiful sustained light. And the play of light proves critical to both architect and filmmaker, the former leading the latter as if by object lesson. “If the architecture is any good” intones Scarpa’s surrogate, “a person who looks and listens will feel its good effects without noticing.” The architectural “heights of splendour” may not be a practical place to picnic alone, but Scarpa intimates a certain pleasure in the irrational, and that even a god would be hard pressed to design an attic in the modern era. 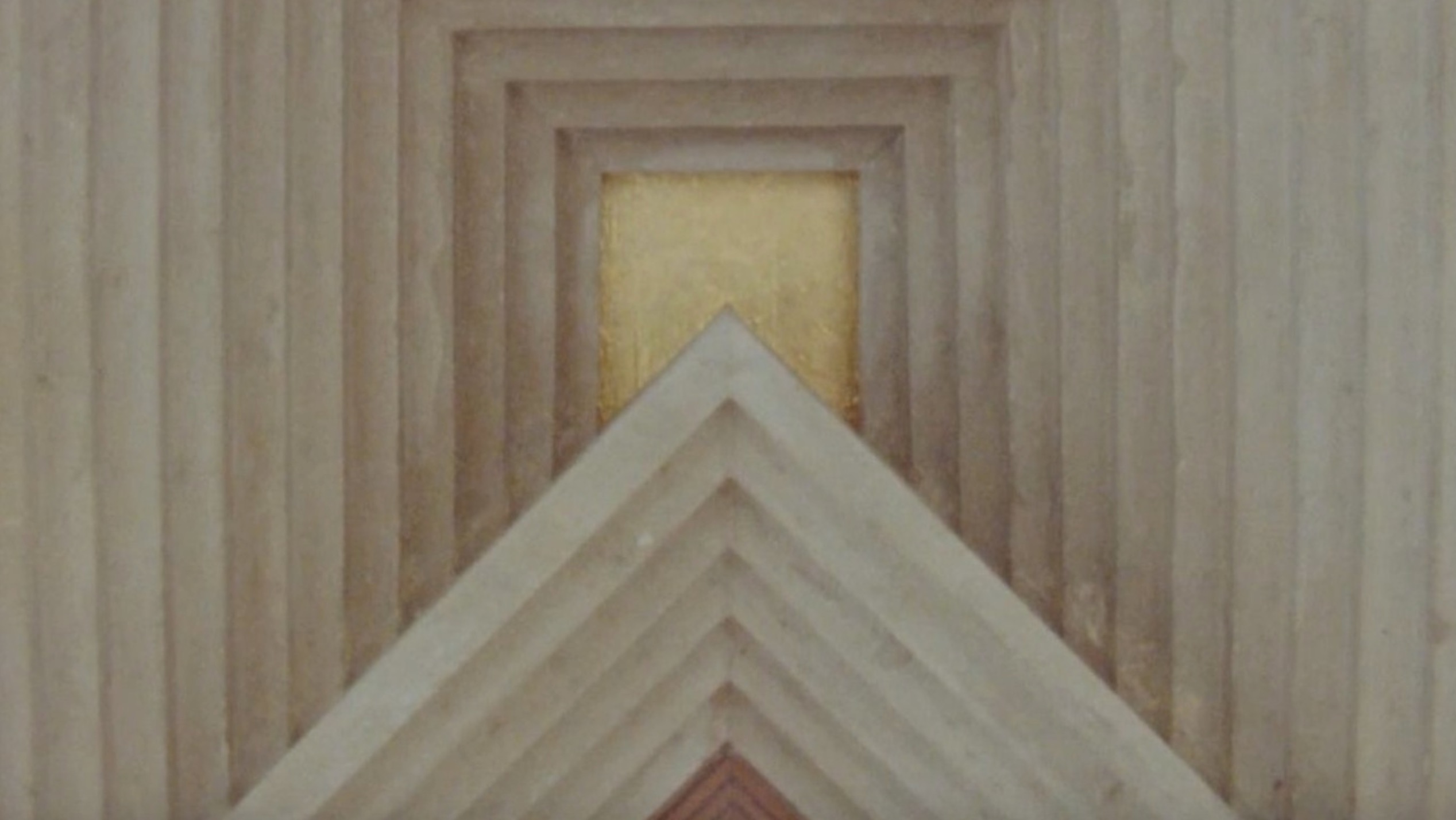 From the image of a faded photograph a Filipina bride is seen in a white gown posing not beside a groom but a potted plant, an enigma that Shireen Seno proceeds to investigate in her quietly composed photo essay on the botany of empire during American colonial occupation, To Pick A Flower (2021, awarded prize for Best Short). Men are seen posing like conquistadors astride the stumps of felled trees. Seno, whose mother once informed her that their dining table was as old as she, is “fascinated by the transmutation of the natural world to the human world, how a tree takes on new lives long after it has been cut down.” But neither tree, nor its photographic likeness, can be isolated from the “entanglements” of empire, as the legacy of both timber and photography would index the islands’ usurpation at the hands of colonisers. The study of agriculture was, paradoxically, denatured, part of an industrial apparatus. Seno’s recitation of several pictured tree and plant species – Balete, Eucalyptus, Molave – resounds like a eulogy, to the land and its people.

The planting of trees, bamboo in particular, is an auspicious sign to the inhabitants of a village, “KM 47” in Hebei Province, where filmmaker Mengqi Zhang has returned each year to record her family’s home (the film is part of an ongoing series that has yielded an astonishing nine films since 2009) and the generational memories held within the landscape. Self-Portrait: Fairy Tale in 47KM is an unclassifiable document of the artist’s dream of building a home there, a place where especially the kids, mostly girls, can play, draw, dance, and do homework. That they are enlisted in the task of filming this “fairy tale” lends the proceedings a playful yet reflexive quality; one enchanting scene entails a sequence of trance-like choreography in which Zhang films her young charges in the act of filming, the sharing of knowledge passed before our eyes while the youngest attempts to steady her handheld camera. Zhang’s generosity is manifest in the collective endeavour of “imagining” a better life for her community, and of this process being loosely recruited as the floating subject of a film. The participatory documentary practice, originally birthed as part of a project exploring the Great Leap Famine of 1959 in China, points the way toward a radically co-creative and genuinely hybrid aesthetic (the film was awarded the Jean Vigo prize for Best Director). 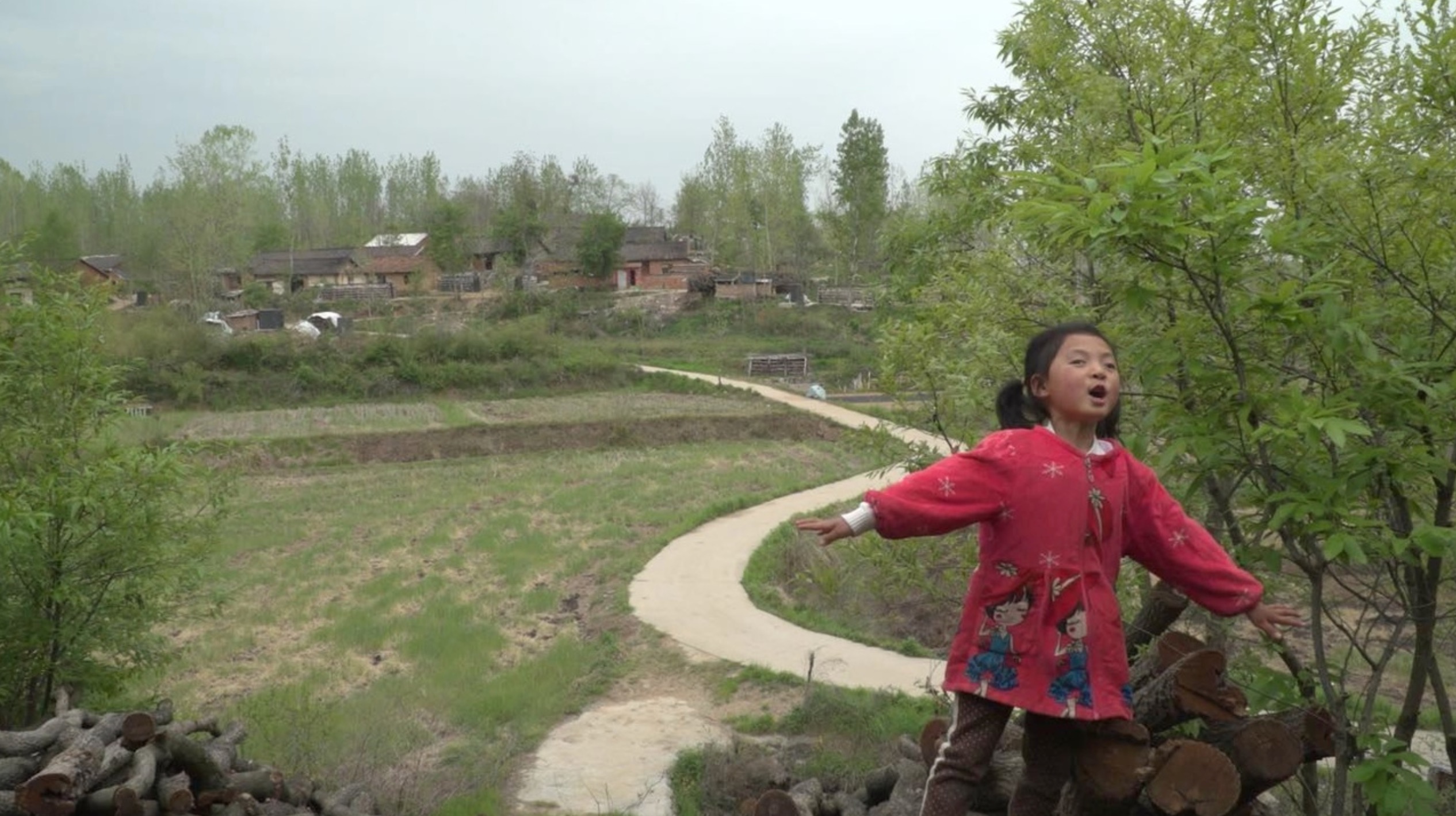 A similarly sui generis, associative style – albeit more singularly focused – could be found in another fairy tale of sorts in Pascale Bodet’s Baleh-baleh, whose title alludes to the canopy bed coveted by have-nots, symbolic of the proverbial granted wish. The tale, read aloud by a middle-aged Frenchman and friend of the director at film’s outset, recounts the parable of a stonecutter who by virtue of his wish in turn becomes a king, a rich man, the sun, the rainclouds, and ultimately stone, whereupon he longs for his former life as a stonecutter (the story can be found in Dutch novelist Multatuli’s Max Havelaar and has many analogues). The seemingly random nature of the tale lodges itself, and soon resonates, in the mind of this man whom we see in his quotidian routines, filmed in an unremarkable verité style: walking his small dog, chatting with his daughters, driving to the beach. Rich in spirit but perennially “surviving”, the lifelong restaurant worker is faulted by his family for a lack of ambition, but perhaps after all he is content, living alone with his dog. Bodet has imagined a modern stonecutter who walks among us and, while conceding to the chagrins of his downtrodden life, longs to be none other than himself. The Jury found it “a beautiful portrait of…. a beaten-down soul”, possibly enriched by its slender means and lean runtime, and anointed it with the Grand Prize. 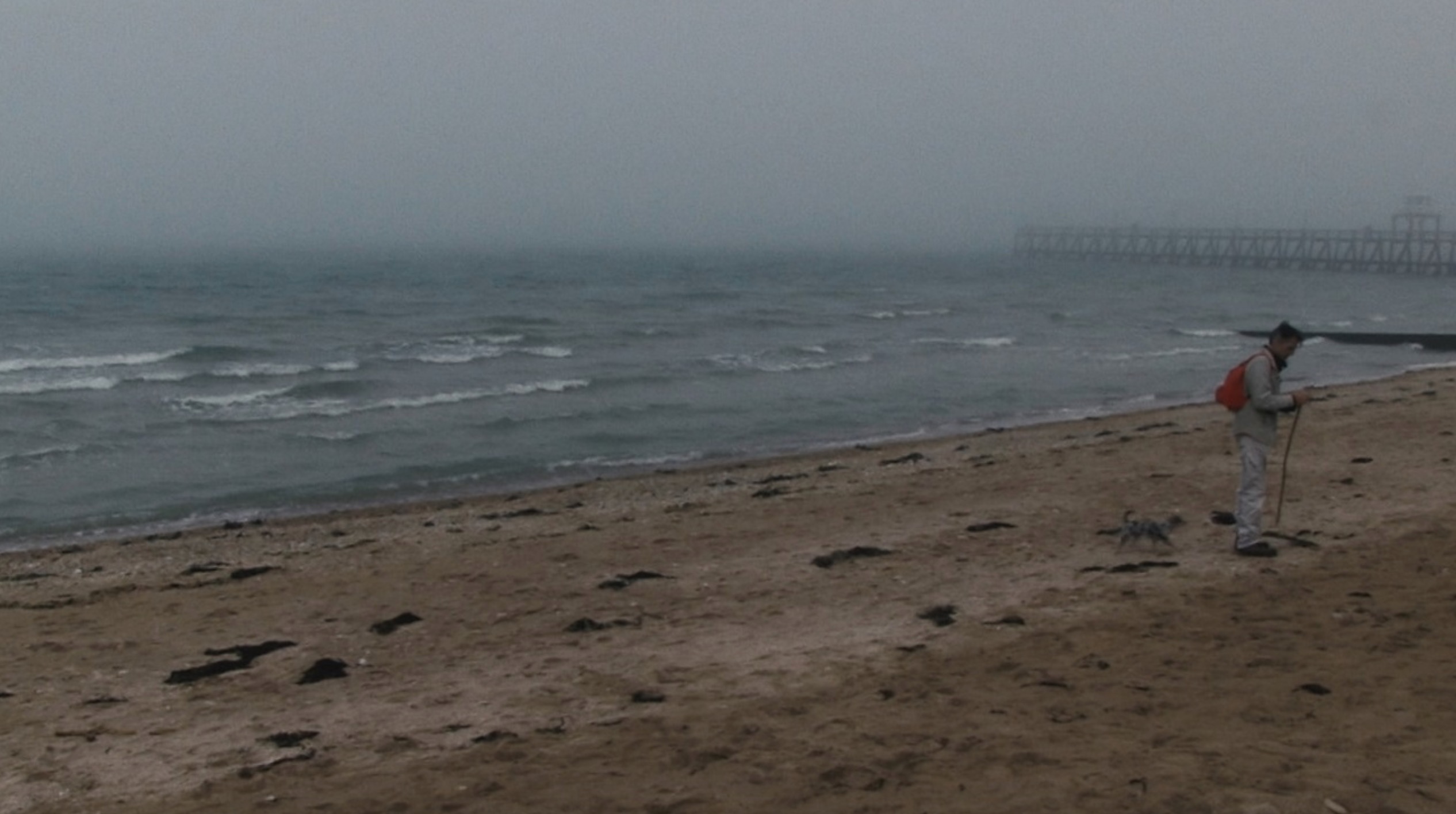 A case could be made for Laure Portier’s Soy Libre, a raw but lyrical portrait of the director’s younger brother, Arnaud, which recounts their tenuous relationship upon his release from a correctional facility in Marseille. Seeking escape from his troubled upbringing in social housing and foster care, Arnaud takes flight to Spain where he lives a free but meagre life: sleeping unhoused, scrounging for meals, committing petty crimes, working out, and drawing sketches from his life. Portier leaves the filming to Arnaud as he crosses the threshold into a more feral existence, complicating the collaborative dynamic of the film, blurring the distinction between artist and model. There is a perverse allure to witnessing Arnaud stripped of privations (one scene finds him cleverly sleeping out in none other than Antoni Gaudí’s Park Güell) while never betraying his core sense of dignity, something intimated in the title. The film provokes questions about the implications, both aesthetic and ethical, of intervention: is Arnaud’s misfortune the filmmaker’s gain? Is the film proof of a love, otherwise inexpressible, between siblings?

Such inextricable intimacy stands in stark contrast to the passive remove with which Paweł Łoziński executes his Film balkonowy (The Balcony Movie, 2021), prescient in its anticipation of collective lockdown that by context made anyone’s veranda during the pandemic a kind of private baleh-baleh. Contrary to its minimal formal conception – Łoziński shoots passers-by on the sidewalk below his Warsaw home over several seasons, engaging them in small talk that invariably becomes big – the method is far from restrained, solicitous even. The camera’s gaze, which the director is fond of calling attention to in his search for protagonists, turns the rather mundane swath of concrete and grass on his street into a stage (upon which many Varsovians fret and some, notably, strut). Or, in keeping with Polish tradition, a confessional. Ex-prisoner, merry widow, dog-walker, mail carrier, wife, recovering alcoholic, expectant mother, flag-waving nationalist, elder neighbour (with broom), newborn child: all are initiated in this procession of souls, their collective voice speaking on behalf of a nation, or even humanity itself…if only they’d get a little closer to the microphone. 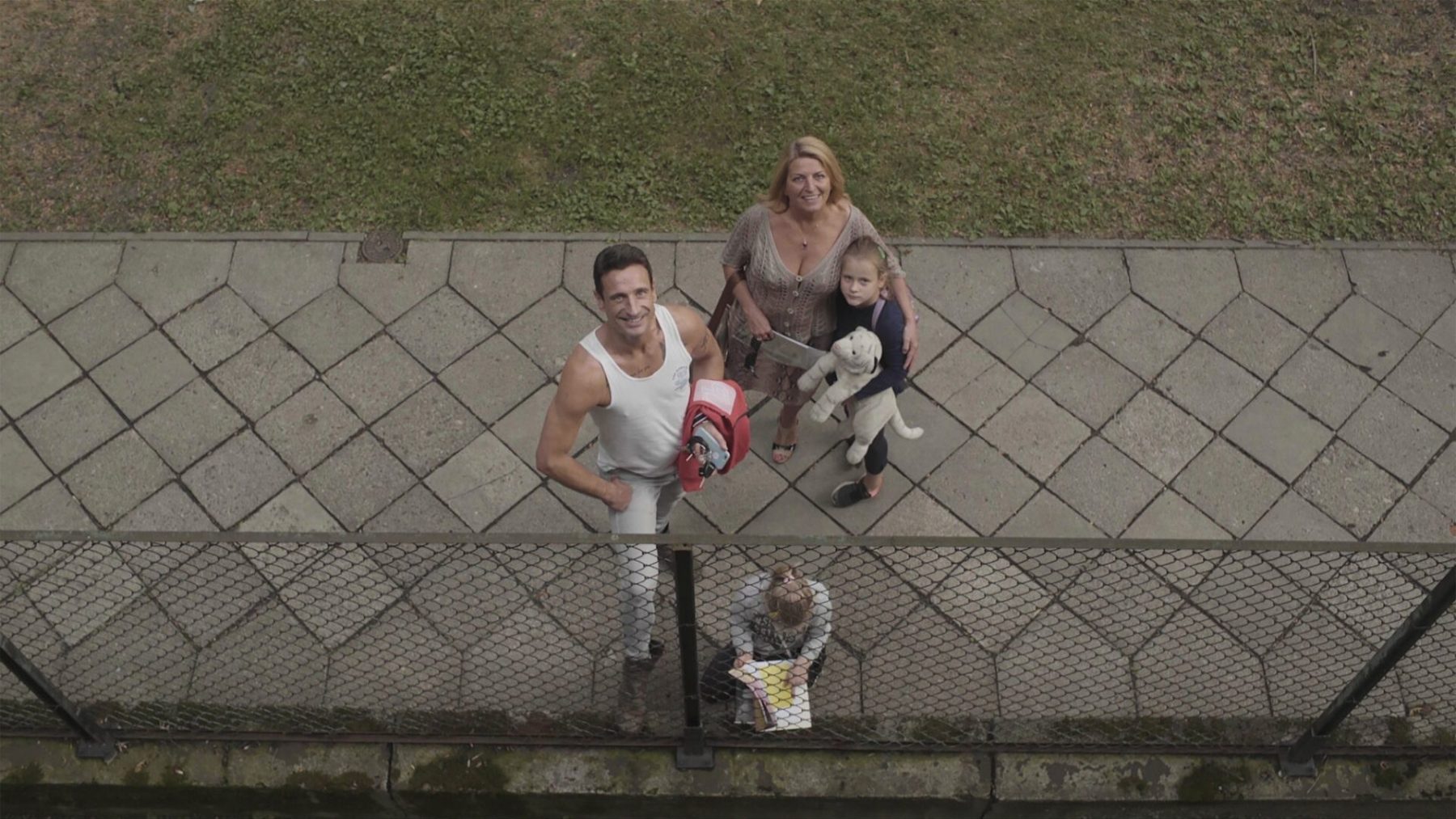 The film persists as a rejoinder to, more than affirmation of, the director’s loftier intent – credit to Łoziński for the editorial acumen of leaving in the unflattering parts. One passage is unsettling in its resilience to the rhetorical call-and-response mode of inquiry: a shy woman hesitates at the director’s beckoning, dragging her wheeled cart in the snow as he explains that he’s looking for a “hero” for his film. “I’m uncomfortable” she tells him, “because I’m not too precisely defined.” “And what are your dreams?’ he implores. “I can’t just tell you that,” she demurs, “Do you really think you can just ask…I guess you have no difficulty communicating, right?”.

The film’s pretext feels momentarily shattered by her candid disclaimer, but is all the more tender on account of the impasse. Still, one can’t help but wonder what Łoziński’s former mentor might have made of such a conceit, having himself committed a film1, Krzysztof Kieślowski, 1979, Poland] about the hazards of compulsive filmmaking, circa 1979, in what became known as the ‘cinema of moral anxiety’. But at the least, The Balcony Movie reminds us that documentary filmmaking might be as useful as shovelling first snow from the footpath.