Violence plays an integral role for post-colonial nations. However, violence is not always as explicit as a revolution or military intervention. Its manifestation can be slower and more ideologically charged. The interwoven politics of the central Government of India (hereby, GoI) and Bollywood, the world’s largest popular cinema industry, epitomises this. Bollywood uses soft power,1 a medium that not only reflects political issues but fuels them. In a process of ‘Bollywoodization’, the canon shapes quotidian understandings of the self and Other in being framed as apolitical entertainment.2 This article challenges the Eurocentrism of film studies that fails to recognise Bollywood as an artistic phenomenon. Artistic credentials invite critique. Thus, understanding the social, political and historical context between the GoI and the Northeastern region enables a deeper reading of the films: Dil Se.. (Mani Ratnam, 1998), Chak De! India (Shimit Amin, 2007) and Axone (Nicholas Kharkongor, 2019). 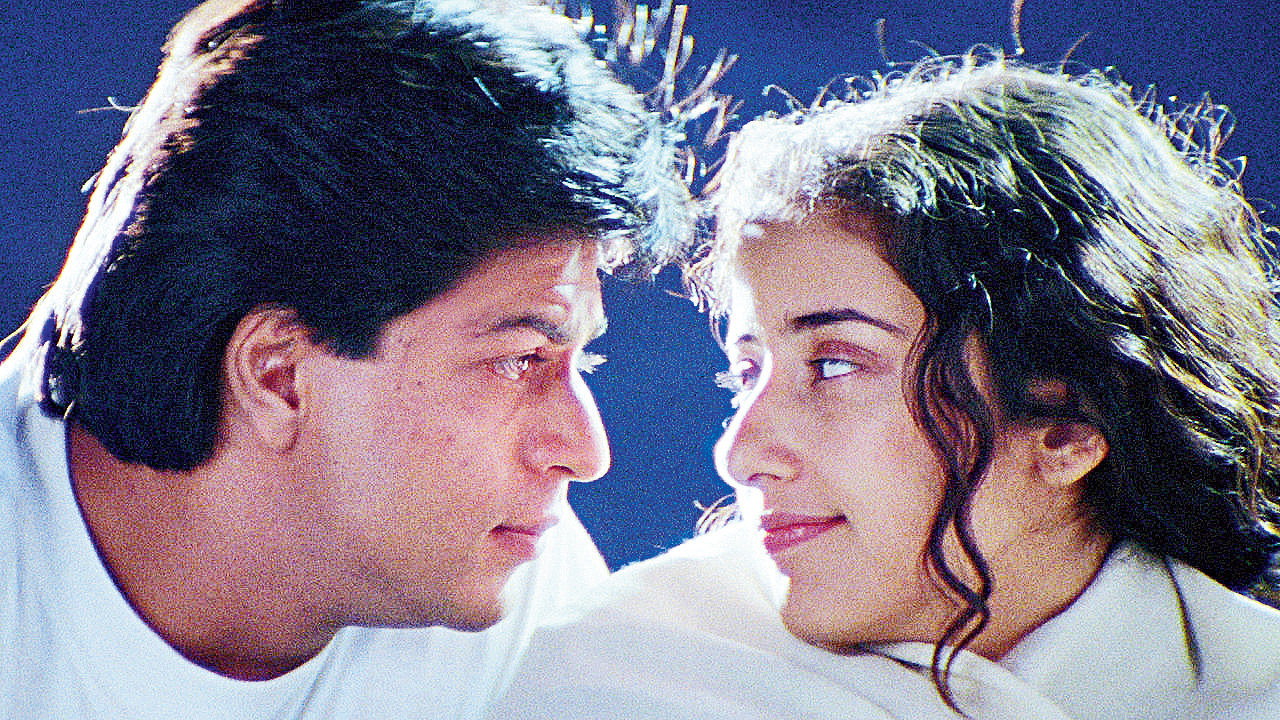 Dil Se.. is a nod towards parallel cinema: a realist alternative to the stereotypical quasi-fantasy-musical Bollywood mainstream. Domestic politics and history are the motor that drives the film forwards. Pre-colonial India existed according to ethnic, cultural, and religious borders. Upon the partition of British India, various Naga and Assamese nationalist groups demanded self-sovereignty and autonomy.3 However, the Indian state subsumed these territories within its new nation.4 After centuries of British and European colonisation, the new nation internalised colonial rhetoric in lieu of emancipating itself from them.5 Diverse Indigenous ethnic groups (such as the Bodo, Angami, Zeme, and the Chakma peoples) have been homogenised into one primitive, monolithic and objectified entity: ‘the Northeast’. This is defined in the popular imagination as a contrast to the modern and heterogenous Indian Self.6 To understand the Self, they constructed the Other7 on a pseudoscientific scale of racial stratification – created by European powers to justify imperialist violence and colonisation.8 These constructions situate the heterogenous Northeastern ethnic groups as intrinsically tribal, anti-modern, and renegade, in comparison to the modern capitalist state and ostensibly civilised citizens of the mainland. The latter is embodied in the nation’s capital, New Delhi. This is the context from which Dil Se.. emerges.

Amarkant (Shahrukh Khan) is a program executive for All India Radio, covering festivities and politics in Assam against the backdrop of India’s 50th Independence Day. Meghna (Manisha Koirala) belongs to an Assamese nationalist group. After a few chance encounters, Amarkant falls in love and aggressively pursues Meghna. His pursuit, given his employment with All India Radio, is symptomatic of mainland India’s imposition on the Northeastern region. A force feeding of national unity. Dramatising the push and pull between a character from the centre of India and another from a peripheral state reflects the tensions between alleged opposites in the eyes of the law and society.9 This is exemplified during Amarkant’s interviews for his news reporting assignment, where he found that many Assamese citizens blame the GoI for underdevelopment and human rights abuses in the Northeastern region. The dialogue underscores geo-politically specific asymmetrical power dynamics when an Assamese militant leader states that “Delhi is India”10 – referring to the centralised accumulation of capital and resources in the mainland, and state failures in effectively developing the region.11

Amarkant attempts to solicit Meghna’s attention on national radio, reminiscing about her “[t]iny eyes” and “flat” nose.12 Northeastern individuals are racialised as visibly Other through the stereotyping of physical features. Fairer skin, epicanthic folds around the eyes, and smaller noses, for instance, are construed as intrinsic to and biologically determinant of individuals from the region as though these features are inferior in a racial hierarchy; with the view that North Indians, from states and territories such as Punjab, Uttar Pradesh, and Delhi, are superior due to alleged ancestral proximity to whiteness through migration during Central Asian, Mughal, and/or European empires.13 Even if not intended maliciously, Amarkant’s monologues reproduce, legitimate and demonstrate the normalisation of racialised othering14 by offering it as a compliment. 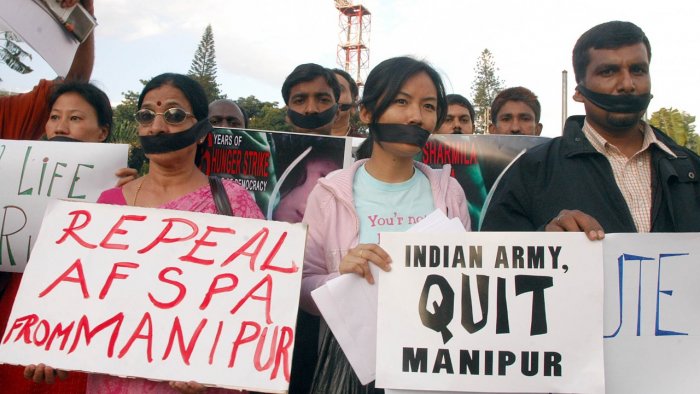 People protest against AFSPA in Bengaluru

Moreover, when victims of state oppression voice their suffering, they are portrayed as anti-national villains whose ‘silencing’ (read: executing) is necessitated.15 This suggests that those who threaten state integrity cannot be allowed to survive, reflecting a very harsh reality for any liberationist16. This plot point is reflected in domestic laws, policies and practice, as the Armed Forces (Special Powers) Act (AFSPA)17 empowers military and paramilitary forces to conduct house raids and commit political homicide to maintain public order in “disturbed areas”.18

Despite Northeastern militant groups prohibiting the public distribution of Bollywood cinema since 2003, the films are increasingly digitally pirated and their reception in the Northeastern region has been more positive than initially expected.19 Chak De! India is one possible mediator of diplomacy. Inspired by the Indian women’s field hockey team’s success at the 2002 Commonwealth Games and released in time for India’s 60th Independence Day, Chak De! India foregrounds sport as political theatre – winning numerous awards including the National Film Award for Best Popular Film Providing Wholesome Entertainment. The film represents the unison of multiple Indian states in the form of various female regional team hockey players – ranging from Punjab to Andhra Pradesh to Mizoram – who learn to prioritise their role in both the Indian nation and the Indian National Women’s hockey team.20 This promotes a united national identity and sense of belonging to an imagined national community.21 However, it also implies suppression of ethnic, cultural, and regional identity in favour of submission to the Indian state – the identity construed as ‘default’ against which all else is measured.22

Molly Zimik (Masochon V. Zimik) and Mary Ralte (Kimi Laldawla) are from the Northeastern states of Manipur and Mizoram, respectively. The inclusion of Northeastern actresses in these roles shows some level of socio-political (and semantic) correctness that is missing elsewhere in Bollywood. For example: North Indian actress Priyanka Chopra Jonas plays Manipuri boxing champion Mangte Chungeijang Kom in the eponymous biopic Mary Kom (Omung Kumar, 2014), using prosthetic makeup and visual effects to mimic a broader nose and epicanthic folds.23 This reveals a simultaneous fascination and disgust for Northeastern individuals,24 as the reduction of diverse appearances across the eight Northeastern states to stereotypes demonstrates racialised Otherness.25 Chopra Jonas (wife to American teen idol Nick Jonas) has previously demonstrated her ignorance to Northeastern issues, inaccurately referring to Sikkim – the most peaceful Northeastern state – as riddled with insurgence.26 This indiscretion risks severe consequences for the Northeastern region as Chopra Jonas’ success in both Bollywood and Hollywood amplifies the scope for her comments to be globally and locally transmitted and internalised, shaping quotidian knowledge and understanding of Northeastern individuals as Other. 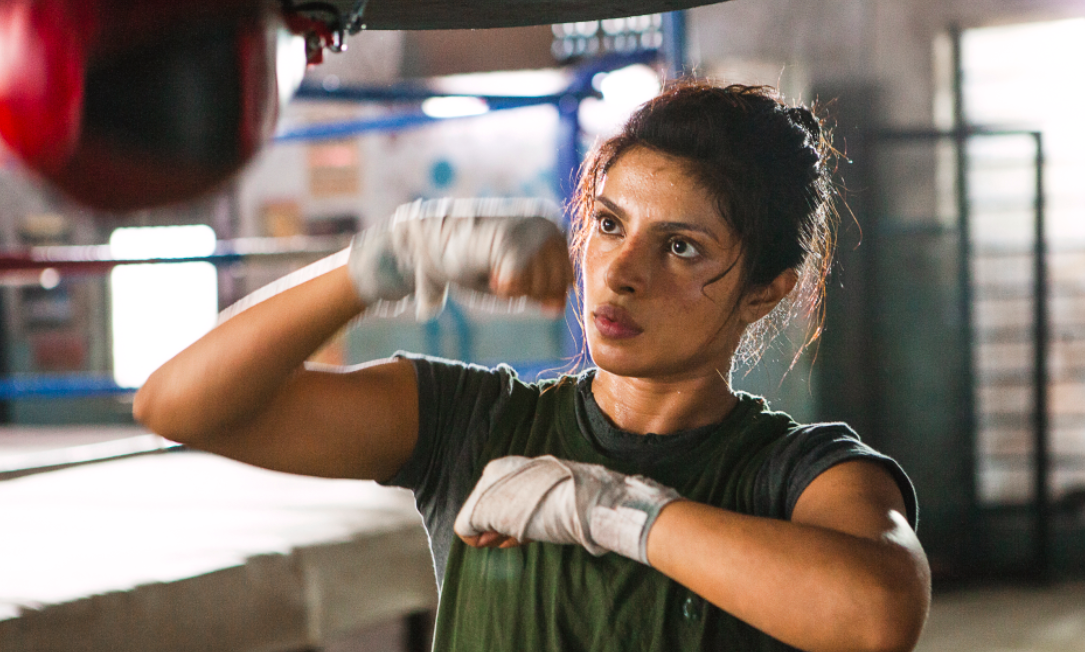 Returning to Chak De! India, Northeastern actresses playing Northeastern roles lends the film some discursive credibility – as does the dialogue that reflects their alienation from their teammates. One scene dramatises the women being “‘welcome[d]’ to India” by a clerk. Indignantly, they reply, “Would you be happy being treated like a guest in your own country?”27 The clerk’s borderline throwaway comment demonstrates the normalisation of viewing and treating Northeastern individuals as outsiders and unbelonging, situating their ‘place’ as being in Nepal or China.28 It insinuates that, whilst the GoI politically marginalises and construes the Northeastern region as non-Indian, the Northeastern region is nevertheless required to view themselves as part of the Indian nation, highlighting extreme power imbalances and hypocrisy.29

Northeastern women are discriminated against simultaneously based on their perceived gender and ethnicity – positioning them as doubly vulnerable to prejudice, social harm, and ideological or physical violence. 30 Societal understandings of Northeastern women are informed by these racialised otherings, constructing them as exotic Others, simultaneously ‘wild’ – following racially-charged reporting of insurgence and conflict in ‘underdeveloped’ terrains – and ‘subservient’ – bolstered by expectations of women to be timid.31 This is demonstrated when Molly and Mary are orientalised and crudely objectified by men who label them as “chow mein”.32 This demarcates the politicisation of a gendered racialised divide33 as women are objectified and compared to food, as though consumable. 34 This objectification becomes fetishisation wherein Northeastern women – and East Asian, due to direct reference of Chinese cuisines – are deemed as the exotic Other through an imperialist male gaze.35 As a result, many Northeastern individuals in the mainland have reported experiencing implicit and explicit racism, being treated as non-Indians. 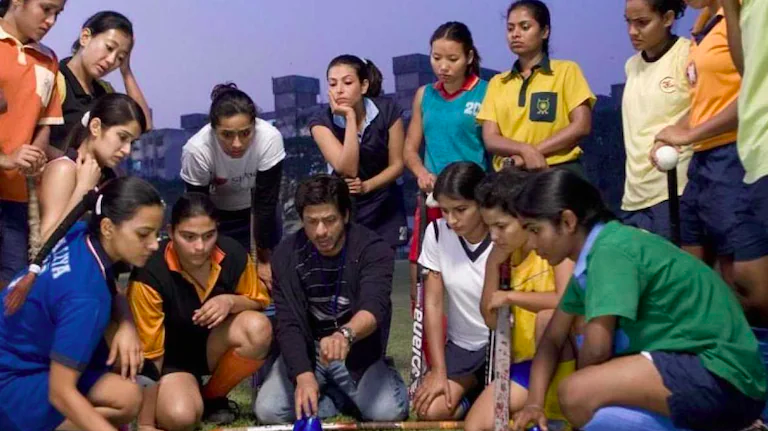 This incident is soon followed by the entire team defending the women, challenging sexual harassment by physically beating the male perpetrators.36 This possibly signifies strength in national unity and a capacity to critique and overcome social inequalities and injustices. However, a deeper analysis of the superficial idioms of unity and diversity suggests that Bollywood simply echoes the GoI’s neo-imperialist aspirations of national integration – and reinforces the “unity in diversity” slogan, informing much Indian nationalism, promulgated by the first Prime Minister Jawaharlal Nehru37 – with orientalist representations of Northeastern Otherness being sustained, as the region allegedly embodies the Otherness that requires controlling and uniting for survival of the national whole. This is reinforced through peripheralisation of Molly and Mary’s characters. They do not get enough screentime for character development, save for portraying gendered racism. 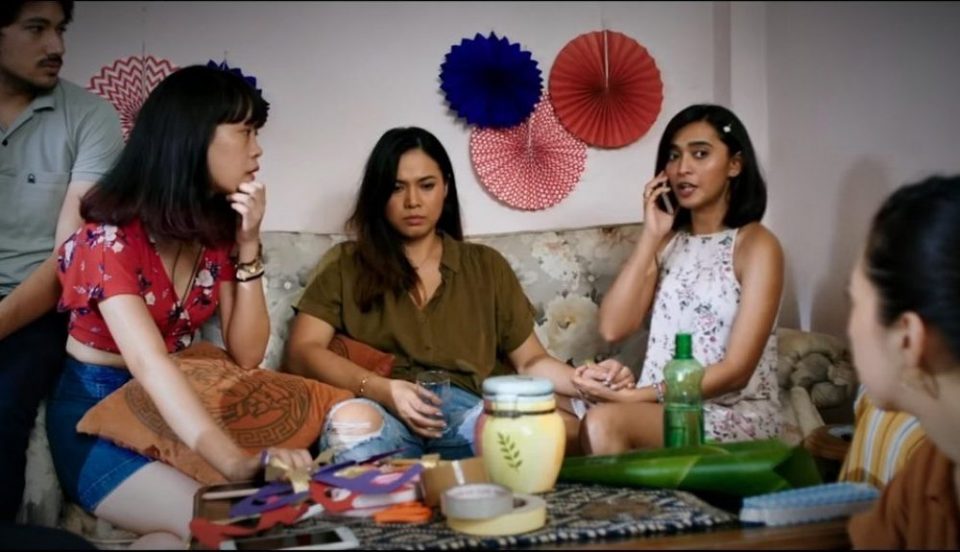 A necessary mention, however, is Netflix’s Axone. Named after the fermented soybean delicacy of Nagaland – axone or akhuni – the film provides a refreshing insight into the experiences of a Northeastern and Nepali friendship group in New Delhi as they navigate renting, relationships, culture, and cooking – delights, worries, life – as migrants in the mainland. By representing their quotidian normality and incorporating an array of Northeastern and Nepali cultures and languages (including Khasi and Meitei), with the cast predominantly from these regions, Bollywood’s tokenism, coupled with racial and cultural homogenisation of the Northeastern region, are contested. Whilst navigating overt racism and microaggressions, matters of internalised racism and intra-ethnic othering are equally brought to light, as Upasana (portrayed by Bengali actress, Sayani Gupta), a Nepali female protagonist, is not considered “Northeastern enough” by her friends,38 given that she is not from India. However, by including some racialised stereotypes of ‘exotic’ wedding rituals and cuisines, and ‘broken’ Hindi and English, the film remains open to critique for portraying Northeastern cultures in a manner that is palatable to a mainland Indian audience: different yet not too different; Them, yet not quite Us. Irrespective of this, Axone suggests that existing according to one’s own truths and desires is a mode of resistance against oppression. 39 This is a reality that mainstream Bollywood films, when centralising trauma and suffering of marginalised and othered groups, tend to neglect.

India is a socio-politically and discursively constructed nation, it does not have one homogenous ethnic group and phenotype but a plethora of them. This begs the question of how this heterogeneous nation can other, racially stratify, and homogenise the diverse ethnic groups of the Northeastern region. Long term instability, underdevelopment, militarisation, and human rights abuses in the Northeastern region may go uncontested by those in the mainland due to the depoliticising and decontextualising power that Bollywood harnesses when internationally disseminating popular images of terror and turbulence in an Other land with Other people. Yet, attempts at deracialising and de-othering the Northeastern region have been made – particularly within regional and non-Bollywood cinema – illustrating the realities of both joy and pain that Northeastern individuals experience. There is power in imagery; both repressive and transformative.