Little did I know in February 2020, when collective laughter – some of the bemused variety – erupted at the Berlinale’s Palast during an absurdist moment in Christian Petzold’s latest film, Undine, that we had been gifted, or rather, supplied with a cautionary song lyric directive for the year: “Stayin’ alive”. In what quickly became an annus horribilis for the ages, this year has been dark and depressing, with mass death of people around the world, the demise of jobs and small businesses during unprecedented lockdowns, huge swaths of land literally ablaze, the rise of state sanctioned fascism, and the continued oppression and systemic murder of Black people, Indigenous people, and people of colour. Suddenly, it all became so resoundingly bleak and that bleakness became an elastic band during isolation, which expanded and snapped. Making sense of the world no longer exists as a concept, yet through all of the literal doom and gloom, I found myself on several occasions thinking back to that scene in Petzold’s film when Frank Rogowski’s ‘Christoph’ is performing CPR on Paula Beer’s soaking wet ‘Undine’ to the beat of the Bee Gees’ disco classic, “Stayin’ Alive”. Rogalski’s delivery is pretty hilarious as the words gradually become audible from breath to chorus, and in keeping with the film’s overall twisty tone. It may be true that med students are trained to do compressions while listening to the song as it aids to maintain an ideal rhythm, but I have certainly never encountered a first responder employing this ultra specific technique. And, yet, the image (with sound, of course) is now lodged in my mind with ample prompts for recall. Forget living one’s best life: right now, everyone – and everything – is just trying to survive and first responders have been on the front lines of that very operation.

The “Ah, ha, ha” utterances are definitely breath related. Covid-19 is a virus that often attacks the respiratory system and in grave cases, victims require a ventilator in order to “stay alive”. Assuredly a coincidence, but I nevertheless ascribed to Petzold’s film a sort of divinatory power, as ridiculous as that seems. When one watches films for a living (that expression seemingly more far-fetched by the day…) cinema infiltrates the fabric of our lives in unlikely ways, infecting our unconscious, portending images that speak to our everyday encounters, inducing emotions, and when great, activates our thinking as well as our senses. It felt wrong and insulting, and certainly privileged, to suggest the situation in which we found ourselves this year harboured a tinge of comedy, but the grave absurd dystopian nature of it all was too much to bear without the consolation of art. With the numbness and brain fog that attended the swell of media saturation and overwhelming and abrupt onslaught of newly released, sourced and shared films online (done in the spirit of that very consolation, community and communication), I preferred to remain close to my recent memories of films seen in the cinema, films that gave me the time and space for concentration and an awareness of both body and mind, films that stayed with me perhaps because of the way I had seen them, sought them out and gave them my full attention.

One exception during my first stint in quarantine (that word all of a sudden terribly au courant) in mid-March, however, when I found myself alone and sleepless, scrolling endlessly, and needing to normalise by attempting to work came by way of Luis López Carrasco’s terrific, three and a half hour El Año del Descubrimiento (The Year of the Discovery), which I viewed from my sofa. I filtered the Vimeo link through the Apple TV and watched it on a large plasma screen with the door closed to shut out the very quiet, but also very noisy world. As the film went on, I was reminded why I love cinema so much and how it has helped me to both understand and see the world. Carrasco’s film perfectly encapsulates the dichotomous elements of the artform that make it so profound to me – an artform that transcends time and space, that can collapse and complicate past and present, that has the ability to be culturally and geographic specific, highly personal and universal at once, and whose form can grapple with the matter of the world. (Both Fassbinder and Akerman often said that the more personal their films were, the more universal they became, their respective idiosyncrasies delving deep into our collective unconsciousness, fear, and desires – our humanness.)

With its lively, smoky bar setting, its images shot on hazy retro Hi-8 video, and its split screen format which allows for the sensation of two people conversing with eyelines matching across each frame, El Año del Descubrimiento made me long for company, for bar chatter, for Europe, for snippets of conversation that were slightly out of earshot, for the comfort of anonymous strangers and bodies in close proximity. Carrasco’s film excavates a little known episode in Spanish history in 1992 at a time when all eyes were on the Olympics in Barcelona and the Expo in Sevilla: a workers’ uprising in Cartagena, Murcia, which led to the dramatic razing of its parliament. Mixing fictional re-enactment with documentary interviews, the film is both sprawling (like a 19th century novel) and very contained, and teaches us that history is never dormant, that localised fights for equality are transmitted across generations, across media (a battleground for propaganda and counter-culture), that first-hand testimony is important in challenging dubious official histories. 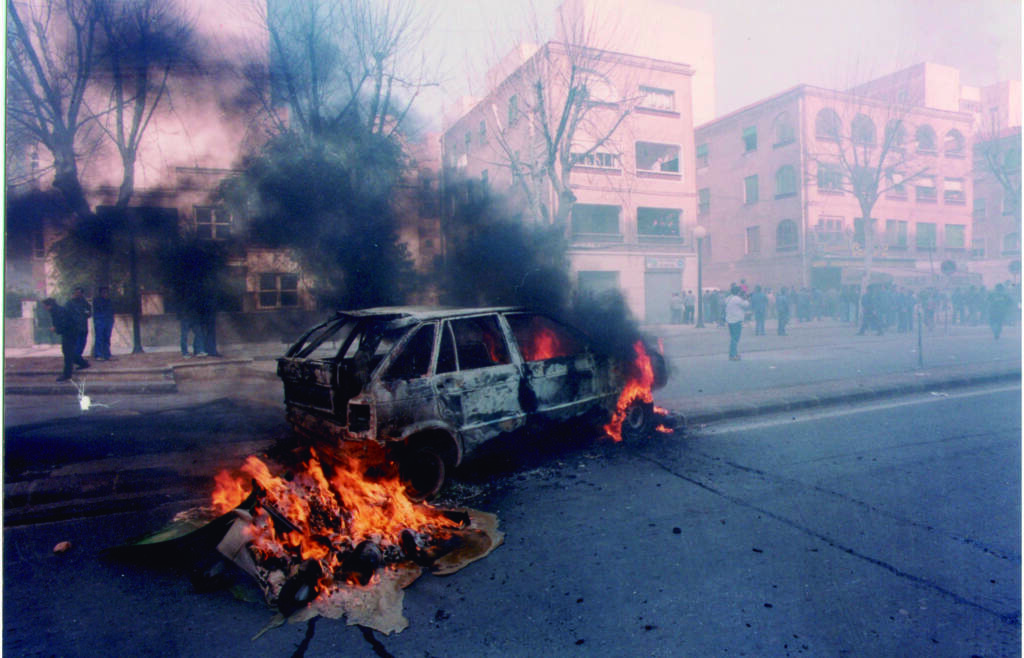 I was tremendously moved by the dignity that united all the characters and subjects in the film, their courage to arm themselves with knowledge, to take personal risks in order to confront collective injustice. The film makes brilliant and intimate use of the benign and the everyday. We all know that the revolution cannot be televised, but by eating, drinking and talking together, we find solidarity and hope for a better future that lies beyond the self. While the future of cinema feels uncertain, like everything at the moment, I have no doubt that once it is safe to do so we shall congregate again and watch films collectively and alone, in cinemas, in galleries, online, and any available platform. Capitalism will forever remain a great threat to cinema as art, but there are too many of us who believe in its power of transformation to let it disappear.